Joe ain’t got nuthin’. No fancy training equipment, no fans, no win-loss record, and by the end of this week’s episode, no Gear either. Hell, he doesn’t even have a last name. How is he going to do this? Well, as the old sports cliche goes, “He’s gotta take it one match at a time.”

— Gansaku actually has connections on this side of the track. He must have screwed up something big to end up with so much debt. I wonder what his story is.

— It’s also interesting how he has to do everything for Joe. You’d think Joe could register himself up to fight, but nah, that’s left to Gansaku as well. What does our hero do besides fight?

— I mean, wouldn’t people find it odd that he has no last name? Everyone else has one. What citizen doesn’t have a last name?

— Meanwhile, we see Yuri training with top-of-the-line equipment. This contraption apparently simulates a fight against an actual opponent. And considering how the future of the entire Shirato Corporation depends on Yuri’s success at Megalonia, you can probably safely assume that he has the best version of this machine.

— Yuri is about to take a break from training, but he can’t help but recall Joe’s words from last week’s episode: “That’s your real Megalo Boxing?” Yuri had just thoroughly schooled Joe in the ring, but Joe still pulled himself up just to taunt Yuri. And just like that, Yuri turns around and resumes his training. What is it about Joe that has Yuri so bothered? Our hero’s just some nobody — a stray dog on the wrong side of the tracks. Why should Yuri even care what Joe has to say? Yuri cared enough to show up in some underground boxing ring. He now continues to care as he uses Joe’s words as motivation. 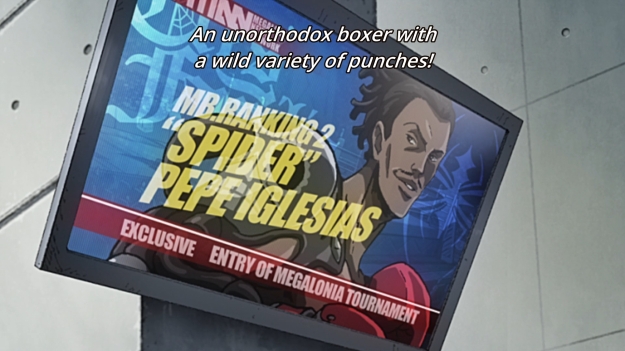 What’s especially interesting about this scene is how Yuri had been watching a TV program hype up a potential match between him and the number two ranked fighter in the world. Joe’s a nobody. He’s just some underground fighter who couldn’t even last a round against Yuri. And yet, our antagonist couldn’t give one damn about the number two ranked guy. Who cares? He doesn’t matter. Joe matters. Joe’s disrespect matters. It’s odd, isn’t it? It’s as if Yuri could sense something honest in the hero’s words. Yeah, this guy has a suicide wish, but at the same time, he’s actually unimpressed by Yuri, and that really gets under the latter’s skin.

— Gansaku’s boss doesn’t even care if Joe wins the whole thing. Luckily, our hero has to at least make it further than that, right? What kind of series would this be if Joe couldn’t at least make it to the finals? Actually, how would you guys feel about that? If Joe lost in, like, the quarterfinals, but the story was still good, would you still feel a bit letdown?

— Joe has less than three months to climb the rankings just enough to make it into Megalonia. Basically, he has to win out. Then once he does get into Megalonia, he has to continue winning. In other words, stop worrying about Yuri and just worry about your next opponent. It’s such a sports cliche, but I guess it keeps athletes focused.

— Afterwards, Gansaku is going on and on about how they need to spruce up Joe’s Gear. They can’t afford something as nice as Yuri’s sick Gear, but our hero still needs an edge. Joe nevertheless finds himself lost in thought. Just hearing about Yuri makes him think of his humiliating defeat. He ends up ruining a perfectly good apple as a result. Both guys are fixated on each other, it seems… even though Joe has a long way to go to even earn the right to fight Yuri a second time.

— All of a sudden, the focus turns to these street urchins. They use a remote-controlled mouse to steal a few cameras from some poor guy. Nevertheless, this is all they get for their efforts. Cameras for candy… that’s not even worth the trouble, man. What’s even worse is that there are four kids, but they only got three pieces of candy. Three pieces of candy for electronics? When Sachio, the apparent leader of the kids, gets mad at the store owner, the guy actually pulls out a knife to retaliate. This forces Joe to step in and save the day, but not without pissing Gansaku off. Hey, what was he supposed to do? Watch a kid die in front of him?

— Nevertheless, this same shop has a prototype of what Yuri wears. It immediately catches Gansaku’s eyes, but obviously, he can’t afford it for his guy. His best hope is to steal the damn thing.

— Joe’s training begins, and all he gets is some makeshift boxing ring under a bridge. Luckily, Gansaku seems to know a thing or two about boxing strategy, so he’s taken up the mantle of becoming Joe’s trainer. It’s clear that Joe has raw talent but very little between the ears. He isn’t dumb, but it doesn’t seem as though he’s ever relied on anything but his natural skills.

— The kids have dropped by to watch, so Joe has some fans… even if they’re not impressed with his dead last ranking.

— Sachio even sticks around when it’s raining. That’s some dedication. What does he want from Joe?

— Gansaku continues be a jack-of-all-trades when he unveils a souped up version of Joe’s Gear. He apparently managed to squeeze out some extra oomph from that ugly hunk of junk. Out of nowhere, Sachio suddenly objects. Apparently, it sacrifices too much for power, so Joe will just hurt himself in the ring. Gansaku counters that if Joe sticks to the battle plan, then he won’t have to be in the ring long enough to hurt himself. Nevertheless, the story is setting Sachio up to be some sort of savant when it comes to machines and gadgets, so we’re going to have to side with the kid.

— Inside Sachio’s hat is a photo of his family. Considering how he’s stuck fencing goods for candy, his parents are probably dead. Nevertheless, he desperately wants Joe to take him to Megalonia. Sure, Joe could do that… but what does Sachio even hope to find there? Guess we’ll just have to wait and see. In the meantime, Joe won’t do any favors for the kid. If Sachio wants to go to Megalonia, he’s going to have to earn his way there.

— Afterwards, we see Gansaku angrily chucking bottles of wine at the side of the bridge. Sachio’s words really got to him. Over and over again, words really do a number on the characters in this week’s episode. It’s all about pride. Yuri’s pride took a hit even though he destroyed Joe in the ring. Joe’s pride took a hit just from losing. And Gansaku must have realized the truth in Sachio’s words if he’s this worked up. 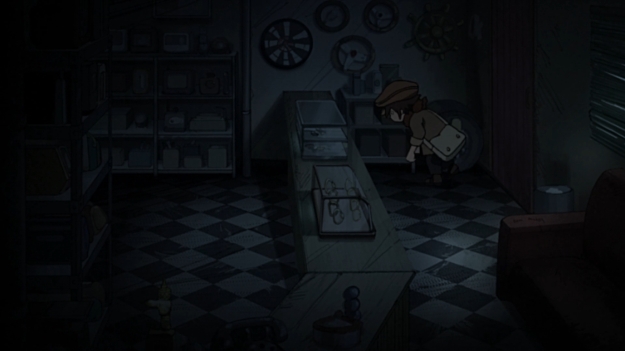 — So later that night, we see Sachio sneak into the shopkeeper’s store — the same store that had that prototype Gear. Oh no, he’s going to try and steal it for Joe.

— Joe returns to find his current Gear completely ruined. Sachio was right, and Gansaku pushed the Gear too far. That’s the problem with jacks-of-all-trades: he knows enough to tinker with the damn thing, but he ends up biting off more than he can chew. He got too desperate. Sure, Joe can’t afford to lose a single match, so he wanted to give his fighter the biggest advantage possible. But now, Joe can’t even fight at all.

— Meanwhile, although Sachio is successful in pilfering the prototype Gear, he also manages to get himself caught. He protests that he and his friends had originally found the Gear, so by all rights, it should belong to them. But of course, this is not a just world. In fact, this is a brutal dog-eat-dog world in which grown-ass adults can squeeze blood out of a young child. The sad truth is that nobody’s going to give a shit about some street urchin with no family and no citizenship. If Sachio were to die here, nobody would even bat an eyelash.

— All of a sudden, Joe’s bike comes crashing through the window. Right behind the bike is, of course, Joe himself. This show oozes cool.

— Joe has also donned the prototype Gear, and he’s all too eager to test it out. Unfortunately, he failed to account for the fact that his opponent isn’t wearing gloves. No matter how fancy the prototype is, it can’t take actual punishment. It soon starts to malfunction, and Sachio has to quickly destroy the Gear in order to get it off of Joe. Welp, so much for that. The good guys have managed to wreck two Gears in one episode.

— Still, one of Gansaku’s valuable lessons is that it’s not the Gear who decides who wins. So even though Joe’s Gear-less, he still intends to win this unofficial match.

— Sachio proves his worth even more by using his ears and complete understanding of machinery to predict what Joe’s opponent might do next. With that, Joe lands the finishing blow.

— Basically, Joe lost his Gear on the eve of his first match, but he’s slowly assembling his team. Sachio’s savant-like understanding of machinery might even get our hero something better than he could ever dream of. I wonder, however, if the team will continue to grow from here or if the kid is all we’re going to get.

— Plus, what is Joe gonna do now without any Gear for his first match? Maybe Sachio can cobble something together real quick.

6 thoughts on “MEGALOBOX Ep. 3: Starting from the bottom”