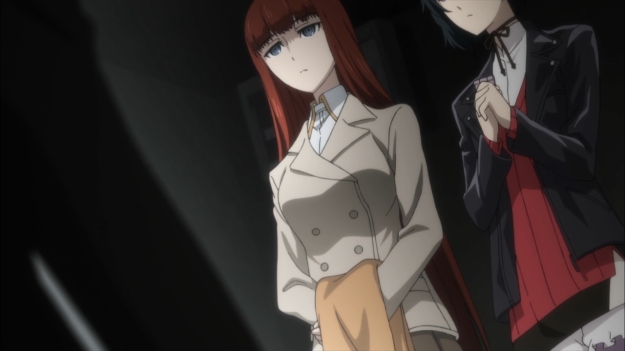 So we have an AI who has Kurisu’s memories but no corporeal body. And in this week’s episode, we are introduced to Kurisu’s physical lookalike (except, of course, her breasts are too big), but the new girl has no memories to speak of. Basically, she’s an amnesiac. Look, I just figured it out. If we just fuse these two together, we’ll have our Kurisu back! No need to play Steins;Gate 0 at all!

— Speaking of Steins;Gate 0, I could get the PS4 version for about 30 bucks. Has anyone tried it? Is it worth playing?

— Does nobody notice Rintaro freaking out about Moeka? Or is it one of those anime things where his inner mental state is visibly only to the audience? At least Suzuha asks him about it later. Daru seems oblivious, though.

— Mass animal corpses in America? That can’t be random.

— It wouldn’t be the end of the world if Moeka was still after Mayuri’s life. I kid, I kid… but not really. Mayuri is the worst girl. I just really dislike overly cutesy, childish characters.

— Wait, Moeka sniffed out Daru’s secret work, so he just decides to ask her for help?

— Rintaro can’t trust the woman, but then he doesn’t protest when Daru decides to hire her. Ah, anime characters and their lack of communication. He doesn’t have to outright make a scene, but he could at least suggest to Daru that they should talk it over first.

— Oh hey, it’s Yuugo and Nae. I wonder if they’re bad guys in this timeline as well.

— God, it kinda ticks me off that these characters continually back off after questioning Rintaro just a tiny bit. He has all this useful information, but he can’t share it with anyone due to his trauma. But at the same time, where do we draw the line? At some point, your allies need to know what you know. I understand that they all care for him, so they won’t push him. But we need someone who will. We need someone to challenge Rintaro. We need someone who cares about him, but won’t also allow the guy to fall into a mental rut. This is a role that should’ve been fulfilled by Amadeus, but…

— …our hero is ignoring Amadeus for now. He hasn’t informed anyone about this, though. He tells neither Maho nor Alexis that he’s uneasy about the experiment, and obviously, he won’t voice his concerns to the AI. It’s so frustrating to watch a guy who just shuffles to and fro like a zombie. You can’t blame everything on your trauma or broken heart.

— And more on the Amadeus thing… my main interest in this show is seeing how the guy interacts with his Kurisu-flavored AI. I know we’ll see more of her later, but I’m kinda disappointed that she’s been temporarily shelved for the time being.

— Wouldn’t Amadeus know if his phone is broken or not? I thought she had access to its files.

— Every character has this dumb problem. Maho wants to pay Rintaro a visit, but she tries to hide this fact from the astute Alexis. Why? Okay, she’s embarrassed, but again, why? ‘Cause they’re a man and a woman? Haha, I mean… c’mon, they’re both grown-ups, and they’re both working on the same experiment (even though he’s just a volunteer guinea pig). What is there to be embarrassed about? These stupid animeisms drag down a potentially good story with their mere presence.

— Moeka already has her report on the Kagari issue. That was fast. There’s a second party also looking for her. A group of men, in fact. One of them is a foreigner. How many foreigners do we even know? Just Alexis, I think? Ooooh, Alexis, what have you been up to, you naughty professor!

— What’s with these shadowy figures in broad daylight? Who knew so much shady conspiracies could unfold in Akihabara of all places?

— Damn, mismatched shoes. Tsk tsk. Or is this supposed to be “moe?”

— Y’know, if you’re being followed, I think the last thing you should do is to enter an empty alleyway. I bet it’s nobody dangerous anyway.

— So the “stalker” is just her foreign professor friend. Christ.

— Her breasts are even bigger than what is already considered big for this anime, because she’s a foreigner. GG anime.

— Maho: “But it was still cruel of you to stalk me from the station.” Judy claims, however, that she just saw Maho enter the alleyway, so she decided to say hi to her friend. Hmmm. Hmmmmmmm. Neither Judy nor Alexis seem all that trustworthy. Is Steins;Gate 0 trying to make a point about foreigners making a mess of Japan?!

— Everyone just assumes that Maho and Rintaro are a thing, which makes the girl feel even more annoyed. This writing, man. Adults aren’t actually like this. I have yet to see anyone tease me for hanging out with my opposite sex friends.

— Daru: “Did we trigger the flag for Miss Hiyajo to be inducted into the lab as our token loli character?” You laugh, but she’s already this show’s token loli character. Plus, is he really gonna gush on and on about lolis in front of his damn daughter?

— Maho wants to give Rintaro a way out of the experiment, but he won’t let go. He can’t talk to Amadeus without being thrown for a loop, but he isn’t willing to get rid of the AI either. He can’t think logically. He can’t separate his emotions from his decision-making. On the one hand, I understand why he is the way that he is. On the other hand, it’s so frustrating to watch. It’s weird, isn’t it? The original Rintaro might have been too much of a hero. Maybe this Rintaro is more realistic. Nevertheless, I like him way, way less.

— Sometimes, we want our heroes to exemplify the qualities that we may never find within ourselves… but if you push it too far, they become a Mary Sue. Treading that fine line is what distinguishes a great writer from merely an adequate one. I think the person behind Steins;Gate can adequately tell a story, but I have yet to be engrossed by either this series or the original.

— Oh noooo, it’s worst girl Mayuri! And the first thing that comes out of her mouth are plans for yet another goddamn party. She probably feels that this is the best way that she can support him, but eh…

— Rukako drops by, and he’s like, “Oh, there’s someone I want you to meet.” How come nobody ever messages each other first beforehand?

— Not every girl with red hair is Kurisu, man.

— But shit, if that isn’t a dead ringer for the dead girl… it isn’t Kurisu, though. Our new redhead claims to be… nobody. She just has amnesia, so she has no clue who she is. For some reason, Rukako thinks that Rintaro might be able to help. ‘Cause, y’know, he’s always talking about “complicated things.” Haha, c’mon… Anyways, with the new girl’s red hair, the fact that her face resembles Kurisu’s, and her missing memories, is this not the Kagari that we’re looking for?

— For now, our amnesiac’s name is just Kana. When she sees Mayuri, she collapses from shock. Just to seal the deal, Suzuha walks in, sees the girl, and calls her Kagari. Welp.

— I still can’t shake the feeling that it’s not that simple, but maybe I’m just paranoid after all the stuff about Maho being stalked.

6 thoughts on “Steins;Gate 0 Ep. 5: Yet another Kurisu lookalike to taunt our hero”