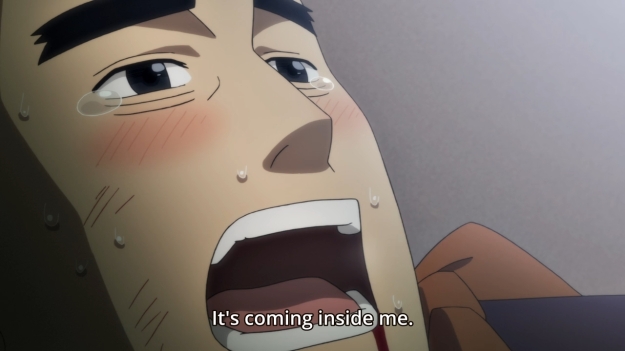 This time, Sugimoto needs to put down a raging boner with his own hands. It’s harder than you think.

— There are few things worse than going to the bathroom and finding a dead body in your toilet. Very few things. When Asirpa tries to warn Sugimoto, however, the notorious serial killer Henmi had already dragged the ex-soldier away. Oh boy, here we go.

— The problem here is that Sugimoto can’t really win. If he doesn’t kill the guy, then Henmi gets to run free and hurt more people. If he does kill the guy, well, that’s exactly what Henmi wants. The ideal situation is to have the serial killer arrested, but Sugimoto doesn’t really want to draw the authorities’ attention to himself.

— Speaking of the authorities, the 7th Division are here. Henmi thinks they’re after him, but I’m not so sure about that. After all, Tsurumi said he’d leave the gathering of the tattoos to Sugimoto’s team.

— Tsurumi’s just going around, soliciting business owners for money? Luckily for him, this fisherman is probably as crazy as he is. All he knows is herring, and yet he’s got this snazzy-looking machine gun. And unfortunately, Henmi takes Sugimoto right to the very same house where this is all going down.

— This is Asirpa’s best “I need to poo” face, apparently.

— What the fuck? The old man just opens fire in his own goddamn house. What if he hits a loved one! Ironically, however, all this mayhem somehow gives Sugimoto an opening to escape.

— Man, I’m just about done with Henmi and his voice. I’m hoping that Sugimoto takes care of the guy by the end of the episode. The portrayal wants to make the serial killer come off as exceedingly creepy, but it’s just kinda annoying now. Both his speech and mannerisms are a bit too over-the-top.

— And good thing Asirpa always has the hero’s back. Would the Immortal Sugimoto have died if she hadn’t shot that arrow? Maybe. 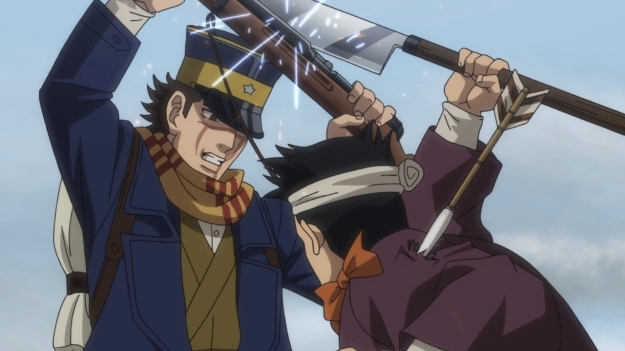 — Henmi can’t go down yet. Unfortunately, someone went and spoiled it for me that a CGI whale will eventually rear its ugly head in this week’s episode, so I’m waiting eagerly for that visual spectacle.

— Despite what I just said about him not being allowed to die yet, I’m nevertheless amazed that Henmi is still putting up such a good fight despite taking an arrow to the shoulder and two knife stabs to the chest.

— I thought Tsurumi would let our hero gather up all the tattoos, but I guess not. He’s dead set on chasing Sugimoto all the way out to sea.

— The whale is tossing Henmi around like a beach ball.

— I hope that’s just the sun and not his gleaming boner.

— Asirpa tried to cover her eyes when Sugimoto stripped naked, but I think she still ended up seeing too much.

— Ahhhhhh, this is just too comical. But the speed of the whale lets our heroes escape Tsurumi and the 7th, so this ends up being clever thinking on Asirpa’s part.

— Also, Sugimoto is finally on Hijikata’s radar. This is already the ninth episode of what is presumably a one-cour anime adaptation. I think the manga is still ongoing, so I don’t know if we’ll get a very satisfying ending when the anime is all said and done. It’ll probably conclude on an open-ended note, which I’ll really dislike. I like resolution to my stories, but I’m not exactly keen on reading the manga. After all, the source material doesn’t look like it’s ending anytime soon. 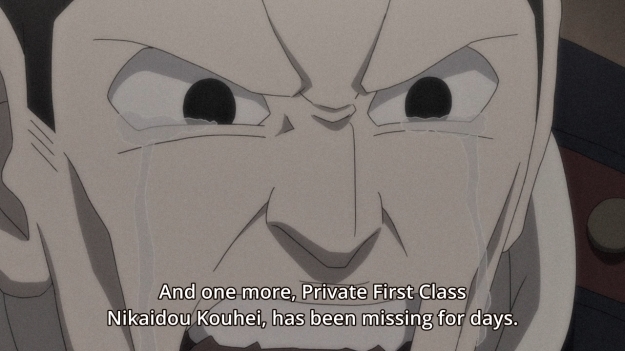 — Looks like Nikaido, one of the surviving twins, has gone rogue. Not just him either. Ogata, the guy who nearly froze to death, is also missing. I guess Tsurumi must not have a very tight grip on his men. Tanigaki speaks glowingly about the man, but it makes sense that not everyone would give a shit about his dream of establishing a new country with the Ainu gold. Plus, Nikaido clearly wanted to avenge his brother, and Tsurumi stopped him from doing so.

— Whoa, how did they manage to kill the whale with just a single spear?

— I dunno why Sugimoto is so hellbent on honoring Henmi’s last wishes.

— Tanigaki looks like he’s getting on well with the Ainu villagers. At the very least, he and Osoma see to have become friends. Maybe he’ll turn a new leaf and become of the good guys. I also always forget that Osoma is a girl.

— Unfortunately, Tanigaki finds Nikaido and Ogata hanging out with Asirpa’s grandmother. Man, I hope none of the Ainu villagers end up dying because of Sugimoto. This is why he wanted to leave Asirpa behind in the first place. Maybe the girl should’ve respected his wishes.

— After a tense scene, however, Ogata and Nikaido eventually get up and let Asirpa’s grandmother go. The former claims that he was just trying to gauge Tanigaki’s reaction. Huh…

— Oddly enough, Osoma doesn’t want Tanigaki to leave the village. Have they really bonded that much? I guess it must have happened offscreen.

— Suddenly, a shot rings out and had it not been for the kid, Tanigaki would’ve taken a fatal bullet to the head. We soon see Ogata sniping at the guy from a distance. He actually doesn’t want to kill the old woman at all. I guess we can look at the bright side and take solace in the fact that Ogata’s not a completely evil bastard?

— Tanigaki has no means of fighting back, though. Plus, even though Ogata and Nikaido won’t hurt Asirpa’s grandmother for now, he can’t be sure that they won’t change their minds in the future. Fun.

— For now, however, the attention jumps back to Sugimoto and gang. Asirpa finds herself nodding off even though they’re in the middle of a rather loud inn. She must be exhausted from all the whale killing.

— Yo, old man, you can’t just go around picking up random children.

— It is Hijikata. Man, Sugimoto doesn’t suspect a thing.

— Oh come on, Sugimoto must have seen and heard the old man whispering to Shiraishi. You can’t tell me he didn’t! They’re sitting right next to each other!

— Dammit, man, are you really that dense?!

— Right before the episode ends, Osoma hands Tanigaki a gun, so it’s gonna be an all-out battle next week. Dude is ready to throw down.