Does Aoi solve yet another problem with food? Yes, yes she does.

— Hatori is the guy with the silly, tiny hat. It sounds like he used to work for Tenjin-ya, but it’s alright, because it sounds like Ginji also used to Orio-ya. I guess these famous inns like to swap employees like we swap partners.

— As for the guy with the silly blue flame leaking from his forehead? His name is Tokihiko. He runs the bathhouse at Orio-ya, and he has a keen interest in Shizuna, Tenjin-ya’s bathhouse attendant.

— By the way, this device has a “You got mail” alert like a bad AOL-inspired device. Also, when you write messages back to your friend, the words won’t show up immediately. Nevertheless, your calligraphy will be absolutely perfect!

— Anyways, let’s get back to Tokihiko and his creepy obsession with Shizuna. Look at him kabedonning the hell out of the girl. Shizuna isn’t completely defenseless, though. She seems to have the ability to judo throw Tokihiko any time she wants. It sounds like they have a romantic thing between them, right? Ah, but y’see, he used to be her teacher. The girl tries to deny it later, but it’s obvious.

— Side note: I hate okra. I can’t stand the slime in them.

— Another side note: don’t you think Shizuna’s bangs are too long? She works in a bathhouse day, so wouldn’t they get damp and cling to her face? Think about it. Just think about it.

— What makes this relationship unsettling for me is that Tokihiko took Shizuna in when she was a child. This show has an obsession with grown men caring for young girls, then falling in love with said girls when they grow up. It’s just gross, because how do you not see her as a daughter? How do you end up falling in love with someone you used to head-pat like your own child? You have Aoi and her mysterious helper. You have Shizuna and Tokihiko. And in a way, you also had Suzuran and Shiro. Aoi’s grandfather didn’t fall in love with Suzuran, but she sure as hell fell for him.

— Anyways, Shizuna and Tokihiko used to work together at Orio-ya. In order to compete with Tenjin-ya, they went all across the land in search of amazing hot springs. Yeah, you heard me. One day, however, an evil spirit attacked them in a cave. Tokihiko naturally jumped to Shizuna’s defense, but he ended injuring his forehead. That’s why blue flame has been leaking from his head ever since. Okay, that sucked. What was silly, however, was that Shizuna got fired from Orio-ya for this.

— So after being fired, the poor girl ended up spending the night in the rain. Really? Despite having a steady job up until that point, she didn’t have enough savings to even rent a room for the night? Like shit, how much do they pay these characters? Do they work for substandard wages or something? Needless to say, Odanna took her in and the rest is history.

— Shizuna: “It’s been a long time since I’ve eaten a hot and fresh meal.” How?! You have a full-time job at Tenjin-ya, but you can’t afford a hot meal unless Aoi hands it away for free?

— As always, Aoi is determined to solve people’s problems with food. Most people would mind their own business, but not Aoi. She barely knows either of these characters, but that won’t stop her from gazing at the moon with the determination to meddle in their affairs. Don’t even tell her not to; she won’t listen.

— This time, it seems like tomato might just do the trick. When Shizuna has a taste of Aoi’s tomato sorbet, she confesses that both she and her former teacher just love the fruit that is often mistaken for a vegetable.

— Aoi: “I wonder how much the master approves of me right now.” I dunno, he keeps trying to marry you, but yeah, it’s a total mystery what he thinks of you!

— The next day, Tokihiko is getting a little too handsy with Shizuna.

— But don’t worry, because tomato will solve everything! And by tomato, I mean ketchup and crackers…? Who eats ketchup with crackers? This is some ratchet shit. 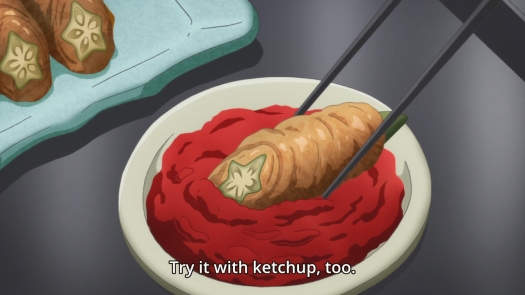 — Actually, my mom used to make something like this for me when I was growing up. I kinda miss eating it. I could make it myself, but eh… I’m lazy.

— But again with the crackers. Why?

— The problem with this show is that it’s so childish. What do I mean? The characters have such childish thoughts.

— All Shizuna has to do is to tell her teacher that she wants to be with him one day, but she’s just not ready. Sounds simple, right? Because it’s really not that hard. Just take a deep breath and communicate clearly. Take half an hour to state your feelings. Write down your thoughts if you need to. Unfortunately, both Shizuna and Tokihiko have the mentality of a child, so they can never do anything but freak out at each other. The guy scares the girl by backing her against the wall, then when it gets to be too much, she throws him to the ground. It’s pathetic. It’s doubly pathetic because ayakashi live longer than we do, but they’re so comparatively immature. Aoi solves Shizuna and Tokihiko’s communication gap by simply having them make meatballs together. Yeah, that’s right, I said meatballs. I’m not even joking. That’s her “clever” solution. Make meatballs and calm the fuck down. Have you guys calmed down yet? Okay, now talk.

— Nobody cooks with hairnets here. They don’t even put on a hat. Shizuna ties her hair back, but she still has her long bangs covering half of her face. How do they make sure none of their hair gets into the food?

— Anyway, that about does it for this week’s episode of Kakuriyo no Yadomeshi. I guess the Orio-ya guys aren’t as bad as we thought.

9 Replies to “Kakuriyo no Yadomeshi Ep. 11: Ketchup saves the day”