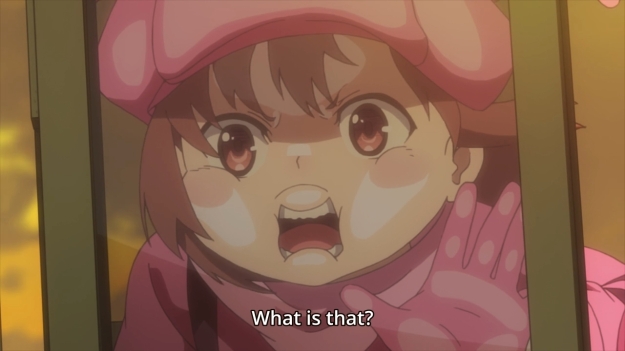 — Again, this show tries too hard to portray Pito as some evil, psycho woman. But repeat after me: it’s… just… a… game!

— Pito’s sword is actually double-bladed. Unfortunately, she doesn’t go Darth Maul (or Exar Kun for you super Star Wars nerds out there) on everyone. She only uses the other blade once to drill a hole through two of her enemies. Also, that guy’s line is laughable. Of course it’s fun for her to kill them! It’s a game! What are you supposed to do? Not enjoy your time in GGO?

— After watching Pito take out six people by herself, Karen suddenly loses her nerve. If you think about it logically, MMTM foolishly charged into a choke point without any understanding of Pito’s capabilities. Of course they would die. But sure, sure, Pito’s suuuuuuch a monster. She’s sooooooo scary.

— See? The show is trying so hard. Karen ends up having a nightmare about Pito in the middle of a game. We’re talking about a game!

— Anyways, with MMTM out of the picture, three of the four remaining teams are still stuck in one place. T-S is content to just ride this out, which is the smart but incredibly boring thing to do. Oh well. I don’t see how they don’t win at this point. Karen and Pito are going to go all out on each other, and the winner of that duel won’t have much left.

— For some reason, both Miyu and the remaining members of SHINC have decided to charge at Pito and M headfirst. Miyu has even tied Karen’s shoelaces to one of her grenade launchers to prevent our heroine from interfering. I think they want to reawaken Karen’s fighting spirit, and somehow, being foolishly reckless is going to accomplish that. Shrug.

— My problem here is that no one here acts like they’ve ever played a shooter before. Nevertheless, I’m supposed to believe that SHINC is one of the top teams on the entire server. But c’mon, they’re shooting at a log cabin. They’re wasting time, energy, and bullets shooting at a fucking log cabin. Like what? Apparently, if two sniping assholes want to camp in one place and pick your team off one-by-one, all you can do is charge at them! No flashbangs, no nothing! Just do it! Just run in and die!

— And there was one–… whoops, nevermind. She didn’t last long. That was fruitful.

— When we cut back to Karen, she’s still trying to untie her shoelaces. For fuck’s sake, just get out your knife and cut them. Jesus Christ, you are all dumb as hell.

— Miyu’s the only one left, and Pito is having grand ol’ time picking off the loli’s limbs. Gee, what a psycho.

— You did all you could? But you didn’t do anything!

— After watching almost all of her friends die, Karen finally loses it and decides to just play the damn game. Enough cowering, enough trembling… just play. If Pito wants to kill herself in real life for some stupid arbitrary reason, this is way above Karen’s pay grade anyways! Seriously! Again, why are we so confident that M is even telling the truth? And even if he is telling the truth, you’re not going to fix a crazy girl’s problems through a game.

— Then again, who’s really the crazy one here? I mean, Karen’s the only one who thinks she can talk to her gun.

— Anyways, our heroine ends up running away from the battlefield. Obviously, she wants Pito to come after her. M balks at the idea, but his partner swiftly kicks him in the balls. He supposedly loves her in real life. Yep.

— Pito gets what she wants, so she’s charging after Karen on top of a car. When M doesn’t drive fast enough for her liking, she kicks him in the head. He just takes her punishment without a word of protest. What a masochist.

— Eventually, Karen turns around and charges at the car. At the last second, however, she uses her loli-ness to duck beneath the vehicle. Pito and M end up careening off a cliff. Finally, someone uses some strategy. Unfortunately, Karen didn’t pick a very high cliff, so her enemies are perfectly A-OK. Whoops.

— Time for Plan B! What’s Plan B? Let’s jump up into the air and shoot directly into the car!

— But don’t let all those sparks fool you. Karen misses everything. Like holy shit, how are you that bad?

— Pito then gets to fire back, and she gets Karen good. Sigh.

— Karen’s health is slowly dwindling, but you can clearly see that Miyu is almost topped off. So right on cue, a grenade comes out of nowhere and creates a huge distraction. Miyu arrives in the other car just in time to save her best friend.

— Apparently, you need an in-game license to drive one of these cars. I forgot about that. That’s also stupid, but again, whatever. That’s just SAO for ya.

— After a high-octane car chase — and I’ll have to admit that I found it pretty entertaining — both cars eventually run out of gas. Miyu and M ram each other, and in the aftermath, we have Karen charging headfirst at Pito with P-chan as her shield. Of course, you could just take out Karen’s legs, but shhhhh, let’s just pretend that Pito can’t aim all of a sudden.

— Finally, Karen gets to step on Pito’s face, which only seems to delight the latter. They’re all nutjobs.

— And we’ll end this episode with a loli trying her best to strike a cool pose. Oh my god, I can’t even. I’m done. End post.