Or not. It doesn’t really matter.

— So back in Mobius, Mu is still busy absorbing everyone’s sadness and thus becoming nuttier by the second. She can’t handle so much negativity, you guys! So please, don’t call this anime bad! You’ll just hurt Mu!

— We then get to see Ritsu and Aria race back to Mobius in order to save the day. I don’t know why they have to race back, though. I mean, race back to what? It’s a computer program, right? So why would they need to traverse any sort of distance to return to Mobius? Is this supposed to be a visual representation of our hero re-uploading his consciousness into the virtual world?

— Also, the anime still hasn’t really explained much about Aria. All we really know is that she’s Mu’s counterpart.

— Anyways, because Mu is losing control of herself, Mobius is slowly falling apart. All of the NPCs are phasing out existing, and the world around the kids are disintegrating. Luckily, they’re perfectly safe where they’re standing! It would suck if the world started falling apart from the inside first!

— For some reason, Kotono decides that now is a good time to reveal her real world identity to her friends. Tak-kun is no lover. Nay, Tak-kun is actually her son. She’s a single mother who resents her own kid. She probably wanted to recapture her youthful days when men would line up just to talk to her. As a result, she treated her son terribly. This would’ve been a nice side story to explore. As a throwaway moment in the very last episode of the series? Not so much.

— In general, Caligula lacks emotional weight. It wants to be deep and meaningful, but there’s no depth to any of these side stories. Yeah, sure, maybe the depth can be found in the game, but hey, I can only judge the anime adaptation for what I can see.

— The Musicians still think that everything will be just fine if they take out the Go-Home Club. There’s only three of them, though. As a result, this shouldn’t be a difficult fight for the good guys. Shounen Doll isn’t interested in fighting anymore because he and Suzuna are friends. As for Wicked, uh… I assume she’s still injured or whatever. Eh.

— Eventually, Mu absorbs enough sadness, negative juju or whatever to assume her JRPG final boss form. So yeah, there’s that.

— Back in the school, Shogo still has his hands tied with Thorn. He finally realizes that the latter isn’t his beloved Ichika at all. Instead, it’s someone by the name of Natsume Asuka. Is Asuka a unisex name? ‘Cause I think Thorn is supposed to be a guy pretending to be Ichika. Whatever, it doesn’t matter. Basically, he’s just mad and jealous that the girl chose to die with Shogo instead of him. Everyone else kinda has stories that I can empathize with in a more ideal storytelling situation, but these two… eh. I think I would still find them pathetic if I had played the game.

— All the anime screaming is awkward.

— At some point, both the Go-Home Club and the other Musicians show up to the school. So uh, what happened between them? Who won? Did they just call a truce or what? Sorry, we don’t have time to answer any of these questions. We gotta have Thorn whip out her (his?) second form and start attacking both friends and foes. 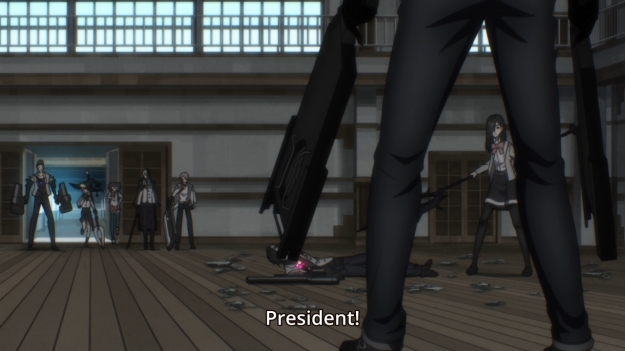 — Oh yeah, I should mention that Ritsu finally gets back just in time to protect Shogo from being killed. Unfortunately, he and his friends don’t really have much time to play catch-up. They just get to know that he didn’t betray them. Yay?

— Shounen Doll appears out of nowhere to protect Suzuna, but it’s unclear whether or not he died as a result. Again, whatever.

— Finally, Shogo tackles Thorn to the ground, and they both proceed to fall into the great white void beneath them. It’s a good thing gravity still works. And see? Now they get to commit suicide together and meet Ichika in the afterlife!

— As for the rest of the kids (even though not all of them are really kids), Aria whisks them all to safety. Where’s safety? Shrug. Don’t worry about it!

— She then leaves everything to Ritsu. He has to reach Mu’s heart!

— What happens next is one really long speech from Ritsu about… I dunno, happiness and shit? Look, I got bored at this point and just droned him out. A cute cat shows up at one point, and that was the entire highlight of the scene. As for everything, I’ve stopped caring. I’ve said it before, and I’ll say it again: if Caligula Overdose ever gets localized, I’ll revisit this story and I’ll revisit it properly. But as far as this anime adaptation is concerned, I’m done. I’m done with the half-assed storytelling and paper-thin characters. I really don’t care what Ritsu has to say to Mu or how much she means to her.

— To make a long story short, he’s in love with a program that he helped write. And with that, Ritsu saves Mu and everyone trapped in Mobius. He still has to shoot her with his fake, virtual gun, though. Ho hum. 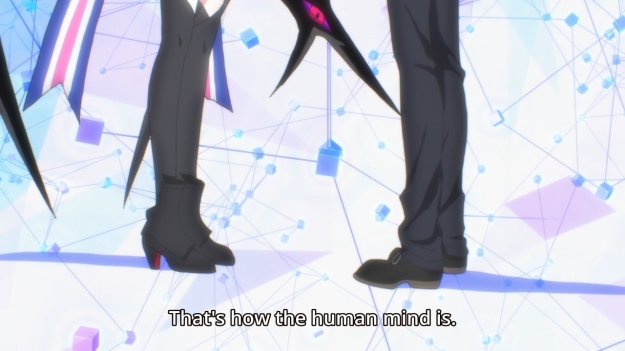 — Look how poorly her shoes are drawn!

— Anyways, let’s get through the epilogue real quick and dirty.

— Kotono gets a second chance to be a good mother again. Let’s just hope she hasn’t done irreversible damage to her son already. For some reason, we don’t get to have a good look at what these people really look like in the real world. Oh well. 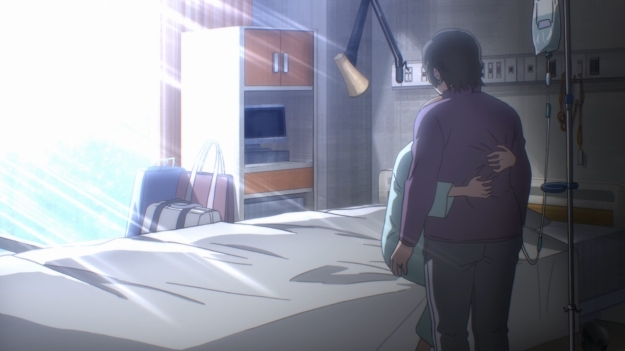 — Mifue embraces her not-so-fat mother. Of course, it’s all relative. In Japan, I guess she’s fat. Here, she could be twice her size and some people would still insist that she’s at a healthy weight. But that’s neither here nor there…

— Izuru also makes up with his mom, but he essentially tells her to shut up.

— Naruko decides to stop trolling. I’m not sure if she ever becomes the reporter that she hopes to be. 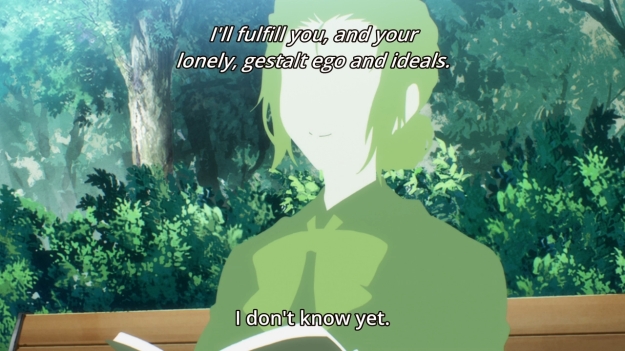 — Suzuna hopes to see Shounen Doll again. Maybe she does, maybe she doesn’t? I know next to nothing about her other than that she’s a loner.

— Kotaro is back to being a kid who supposedly has a shitty home life. So how does this solve anything?

— I think Sweet-P just goes back to eating ramen. 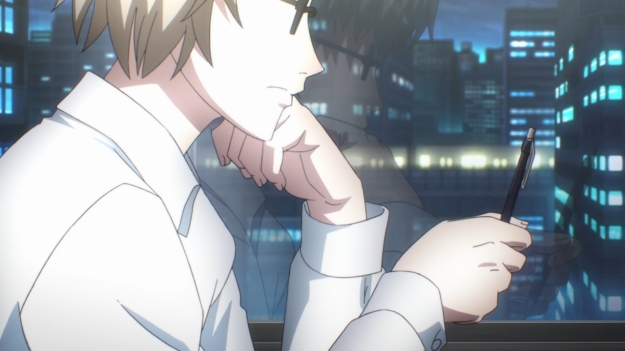 — Kensuke returns to being a bored, unhappy college student.

— Ike-P gets to enjoy his minimum wage job. He can’t even hold a stack of clothes properly.

— Mirei visits… someone. It’s not like she ever got any character development. 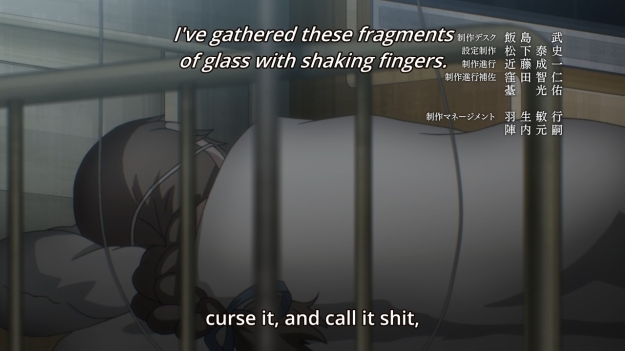 — And I think this is Wicked? Welp, right back to being sickly and bedridden for you!

— And Shogo stops being a hikikomori. God only knows how a grown man can afford to survive without going to work everyday.

— So uh, what about Thorn? Did she (he?) just give up on life without Ichika? 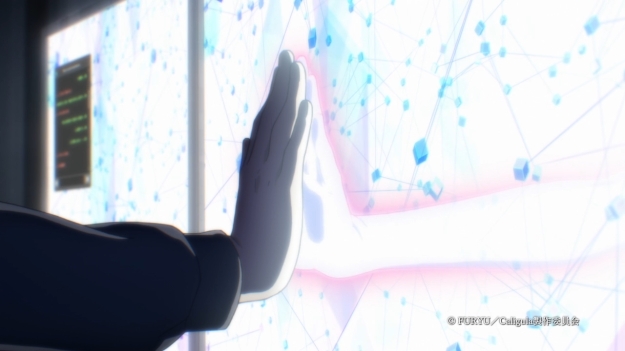 — Last but not least, Ritsu continues to love his computer. But Her, this is not.

— Anyways, what a bad adaptation. But I’ve spent enough words bitching about the show, so we’ll just call it here.

6 thoughts on “Caligula Ep. 12 (Final): Play the game to understand the story!”