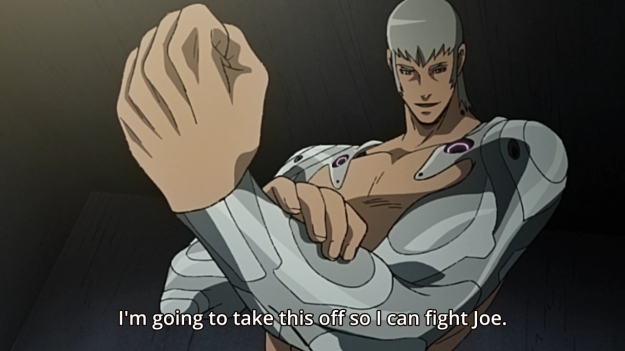 After all this hoopla, both finalists are going to fight gearless. Geez, guys. But seriously, Yukiko said something that really resonated with me: “The battle to determine the greatest Megalo Boxer… between two boxers with no Gear? It’s utter nonsense.” It’s not even Megalo boxing anymore. It’s just… well, it’s just boxing now, isn’t it? We may as well start calling this Ashita no Joe. I really don’t know how I feel about this latest development. I mean, I understand why Yuri personally wants to do this. In his heart, he desires a genuine fight against the first genuine boxer of his generation. Maybe the only genuine boxer of his generation. Unfortunately, there’s no way he and Joe could possibly have a fair fight if he’s got Shirato’s finest piece of technology strapped to his body. It’s not that Joe is guaranteed to lose, but even if Yuri wins, he can’t feel very proud of himself. So what choice has he got? He has to fight gearless. Nevertheless, I still feel somewhat flummoxed. Like we’ve gone all this way just for two guys to fight gearless. Hmph. Oh well. I’ll get over it. One episode left. One fight left. Who will win… and who will die?

— No matter what happens, Yukiko has her contract secured. I assume the government can’t just back out simply because Yuri decided to fight gearless, but you never know…

— Yukiko: “Shirato’s technology will become a beacon of hope for the future.” I have no idea what she’s talking about. All they’ve developed is a piece of equipment that will enhance man’s fighting capabilities to even greater heights. That doesn’t seem very peaceful to me. Now, if she’s referring to the technology’s ability to enhance humanity’s overall physical attributes a la transhumanism, then her optimism would make a little more sense. But this isn’t really a topic that the anime has touched on whatsoever. Plus, she’s selling it to the military, so… 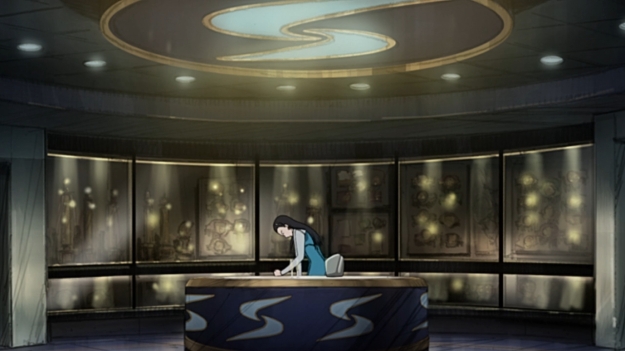 — When Yuri delivers the bad news, she threatens to cancel the finals altogether, but that seems short-sighted. Could you imagine the bad PR this would garner? The widespread outrage?

— Yuri: “From now on, it’s your dream.” In other words, their goals are no longer aligned. But what were their goals to begin with? The story has focused primarily on Joe and his team and for good reason. But one of the downsides of this is that we barely know anything about Yuri or Yukiko.

— Speaking of Joe, everything is rosy in his camp. Yeah, sure, Nanbu lost his remaining eye, but hey, everyone’s spirits are high. Aragaki is even here to help Joe train! What a nice guy!

— Meanwhile, Yuri needs to get the gear off his body, but he can’t get any help from Shirato. As a result, he has to turn to Mikio. Y’know, I didn’t realize up until now that Yuri’s gear is actually grafted onto his body. I guess that’s the only way to achieve such a high level of synergy with technology, but is this something that the military wants to use? Will soldiers really agree to undergo a surgical procedure just to fight in the army? Well, maybe they won’t even have a choice.

— Oh yeah, the Shirato brother has all but completely shunned technology. He actually lives in a log cabin out in the woods. That seems like an extreme correction from his previous life.

— God, that looks painful. I’m sure he’s under anesthetic, but still…

— At the end of the day, Yukiko probably loves Yuri to a certain degree. Unfortunately, she can’t really communicate that to the fighter. Maybe it’s taboo or something. After all, she’s not just a member of the upper society. She’s the head of one of the biggest corporate groups out there. Meanwhile, Yuri’s just a fighter. Then again, maybe she’s just not comfortable talking about her feelings. Either way, she feels as though Yuri has rejected her. By pulling this stunt, he is rejecting a shared future with her.

— Yukiko has her secretary look into Joe’s past, and she digs up all sorts of scandalous details. The secretary assures her that the finals can easily be canceled by simply exposing Joe. Nevertheless, Yukiko can’t pull the trigger.

— Back in Joe’s camp, Nanbu continues to coach his fighter despite his lack of vision. Y’know, if he’s got such a terrific feel for the sport, you can’t help but wonder why he has to throw underground matches in order to get by.

— He thinks back to the first time he met Joe, but there’s really not much here to unpack. It’s a nice memory, I guess.

— In sharp contrast to his counterpart, Yuri’s not doing so well. The pain from removing his gear is excruciating. Hell, his bandages are stained with blood. Is Mikio really sure that this isn’t life-threatening?

— Yuri even has a freaky nightmare in where he is consumed by technology. Hey, more reason to get rid of the crutches now rather than later.

— It turns out Yuri didn’t want any pain-killers. He wanted to face the pain head on. Eh. Fighters, man… I’m not even going to pretend to understand their mentality.

— Yukiko tries one last time to bring Yuri back into the fold. He tells her, however, that fighting Joe in a fair match is the only thing he’s living for now. He’s been searching for an opponent like Joe all his life, and he doesn’t want her to snatch that away.

— Now it’s Yukiko’s turn to think back to the first time she met Yuri. Unfortunately for her, she isn’t just reminiscing. Rather, she’s preparing herself to let go of the past. She has huge obligations and responsibilities to worry about. She can’t spend all of her time worry about Yuri and what he’ll do next. At the same time, however, I still believe she loves the man. That’s why she’s willing to set him free. If Yukiko wanted to be petty, she could’ve just canceled the finals and exposed Joe as a fraud. Instead, she cuts ties with Yuri completely: “I have no business with a gearless boxer.” Sure, her words sound cold, but like I said, she’s still a businesswoman.

— At the very end of the episode, Yukiko pays Joe a visit and hands back his fake ID. This simply cements the fact that she won’t interfere with the finals. Last but not least, she lets Joe know that Yuri will be fighting him gearless. This only serves to amp our hero up even more. Look at that crazy glint in his eyes. He’s like a wild animal rearing to go on a hunt.

— Despite my apprehensions, I’m still looking forward to the final bout. This should be good. MEGALOBOX has been consistent from start to finish, so there’s little reason for me to think that the show will suddenly drop the ball in the final episode.