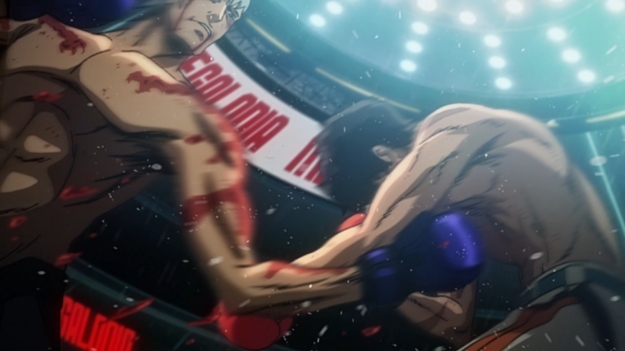 Well, it really depends on how you look at it. I mean, I’m glad both boxers survived, but I dunno, I just can’t love the ending. The whole match never truly crescendo’d. In fact, I felt like I was watching one long, extended denouement. The fight starts out predictably: Yuri has Joe on the ropes thanks to his years of training and experience. Fighting Joe, however, is like fighting a wall. He just won’t go down, and eventually, you’ll tire yourself out. That’s when Joe starts swinging. Near the end of the match, however, Joe and Yuri both realize that winning the tournament never really mattered to either of them. Remember what Yukiko had said in last week’s episode that I agreed with so much? She said, “The battle to determine the greatest Megalo Boxer… between two boxers with no Gear? It’s utter nonsense.” Nonsense to us, but not to these two men! Neither are in this for the championship belt. They just wanted to find each other and they did. They found their dance partner. The anime isn’t particularly exploring new territory, but I suppose it’s better than a nihilist and bloody slugfest in which the hero dies and leaves behind his loved ones.

Unfortunately, we don’t get the satisfaction of seeing the rest of the fight play out. Presumably, Joe and Yuri each go for one last punch, but all of a sudden, we cut to the end of Yukiko’s sales pitch. As she rides home in her car, the woman mouths something that we can’t hear, but I’m sure it has something to do with Yuri. Finally, a single tear rolls down her cheek. The next thing we know, Yuri is delivering a monologue on death as he’s being rolled through the hospital on a gurney. He may not have died, but his career did. And so did his relationship with Yukiko. After this, the epilogue begins. A year has passed, and we see Nanbu practicing his one-year anniversary speech for the opening of his gym. Yuri is now confined to a wheelchair, but he couldn’t be happier. Last but not least, Joe has stopped boxing, but you never know. We watch from the distance as the young man practices his dancing moves. In the foreground, a scorpion watches before walking offscreen. As Fujimaki often likes to say, it is in the scorpion’s nature to sting. With a possible second Megalonia on the horizon, who’s to say that Joe won’t lace it up once more?

Well, that’s all fine and dandy, but where was the exhilaration? Where was our triumphant moment? Fine, fine, I get it: neither Joe nor Yuri really care who wins, but… I do! I still wanted to see Joe’s team swarm him in the ring as the crowd goes wild. I wanted to see his crooked grin as one eye is so swollen that he can’t even keep it open. I wanted to see either confetti rain down from the sky or hear fireworks going off in the distance. But we got nothing, man. Like Nanbu and Sachio, we have been by Joe’s side every step of the way. We saw him pull himself up from the rigged underground matches to the upper echelon of the Megalo Boxing world. And yet, we don’t get to celebrate his victory with him. Man… the ending was just too zen-like for me, I guess. I wanted rising tension, but I got peace and satisfaction. I wanted to feel anxiety and finally release, but I got acceptance. In the end, neither men really had anything to fight for but their pure love for the sport.

Honestly, this is probably a show that I have to revisit in the near future. Maybe I’ll see it differently if I rewatch the whole thing in one sitting. If you see Joe and Yuri as two beasts just trying to free themselves from their respective prisons, then this ending should deliver. Well, logically, I think it should. They fought themselves to freedom, and that was the true conflict all along. Maybe I don’t feel satisfied because I came into the finale expecting a more traditional outcome. I expected a must-win fight. I expected a winner and a loser. Anyways, I loved the art direction, but I still don’t agree with them deliberately making the show look “lo-fi.” Still, the fight choreography is solid, and the sound design is fantastic. The soundtrack is pretty good, too (Sachio’s rap notwithstanding). Overall, the story did its job. I wish we could’ve gotten to know both Yuri and Yukiko a little better, but that’s not a major problem. I don’t love MEGALOBOX, but it’s a solid outing in a season full of uninspired mediocrity.

I’ll keep this short . After all, I think I said everything I really needed to say up above.

— I guess Nanbu always gives his fighters a dog-racing ticket.

— Right before joining his team, Sachio plucks one of the buttons on this backpack. I don’t recall if the episode ever revisits this again in the epilogue, though.

— Removing his integrated gear apparently sapped a lot of Yuri’s stamina. I wonder how this fight would’ve played out if he had had more time to recover. At the same time, however, look how far Joe has come in such a short amount of time. I think it’s pretty obvious that Yuri’s the better fighter, but if they had had the same upbringing, advantages, and training, who really knows?

— I think Yukiko’s being somewhat naive if she thinks she can convince the military not to attach weapons to her vaunted technology. I mean, c’mon, you’re selling it to an organization whose job is to fight and win wars.

— I suppose Yuri has enough winnings that he can simply retire. Joe shouldn’t have that luxury though, right? He still has to make a living somehow. Plus, won’t both men eventually desire companionship? Love? I’m not saying that the anime should answer these questions. These are not important questions at all. I’m just curious as to how their lives would play out. Could you imagine Joe settling down with a steady job and a family? Then again, maybe all he needs is Yuri.

— Maybe Yukiko can be a bro and develop a gear that will help Yuri walk again.