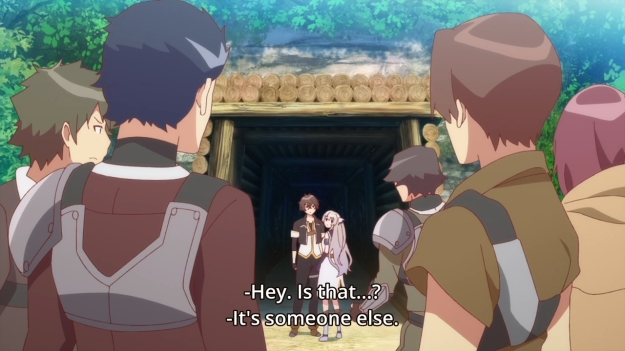 It’s one thing for your childhood friend to magically come back to life only as an MMO avatar. It’s another thing for the entire server to fight over her as if she’s the one ring to rule them all. Seriously, Haruto is probably the only sane person left in Re’Union. And maybe Satsuki. Anyways…

— The girl also discovers that she can’t log out. What boggles my mind, however, is how this doesn’t bother her at all. Oh, my mind is stuck in this video game? Oh well, that’s cool with me! Doesn’t she care about the real world? Was her life outside the game so bad that she doesn’t mind spending her entire existence in a game? At first, it looks like Haruto tries to call a GM, but when the game tells him that Asahi isn’t a registered player, he just gives up on this idea. What? No! I would still contact an official from the game to see what they think about this. Why would you stop!

— I love how Haruto’s friends don’t give a shit about Asahi. Welp, we finished the quest, so we’re going to fuck off for now!

— But even though six years have passed, the server hasn’t forgotten about Asahi at all. In fact, they all want a piece of her.

— First up is this sorry-looking dude. It’s been six years since he last dealt with Haruto, but he’s still holding a grudge. A six-year-old grudge over a stupid fucking game! MMOs are serious business, y’all. 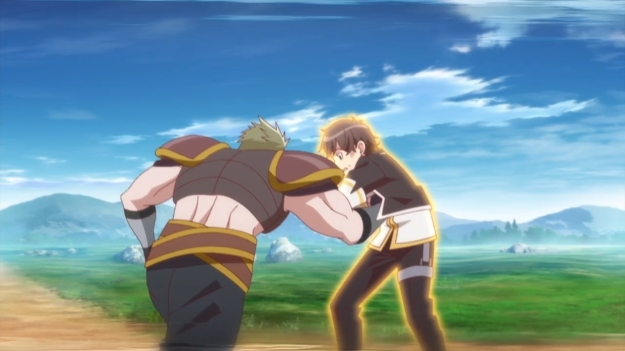 — Although the enemy looks weak, we have to keep in mind that our hero hasn’t touched an online game in six years. As a result, he gets owned pretty easily by his opponent. I guess PvP is unavoidable in this MMO. If people want to fight you, they will fight you. And they will kill you. Anime loves making stories out of these hardcore games, but in the real world, they’re so fucking niche. Nobody likes to lose all their progress thanks to a bunch of power-tripping assholes.

— Unfortunately, the animation sucks, so all we get are some action lines slapped onto a still image. Hell, since these two combatants aren’t even moving, can’t you at least give us a better angle of the action?

— Asahi still has her ability to predict the future, which I expected. The weird part is that it works on other players. Like… what does that even mean? And this power only exists within the game?

— Takanori suddenly shows up out of nowhere to protect Asahi from the bad guy. Like all jackasses who wear glasses in anime, he loves pushing them up with two fingers. I wear glasses and I don’t even do that. But whatever.

— And by protect Asahi from the bad guy, what I really mean is he strips the bad guy of all his clothes. Yeah… uh…

— Takanori: “A coward like you doesn’t need clothes.” What?

— Anyways, this is the same dude who blamed Haruto for Asahi’s death. Alright, they were elementary schoolchildren back then, so you can’t blame kids for being idiots. But after six years, he still hates Haruto’s guts. Man, somebody needs therapy real bad.

— Takanori isn’t bothered at all by the fact that a dead girl has come back to life. He’s just all, “Well, she’s standing in front of me.” Dude. Dude. You were at her funeral! 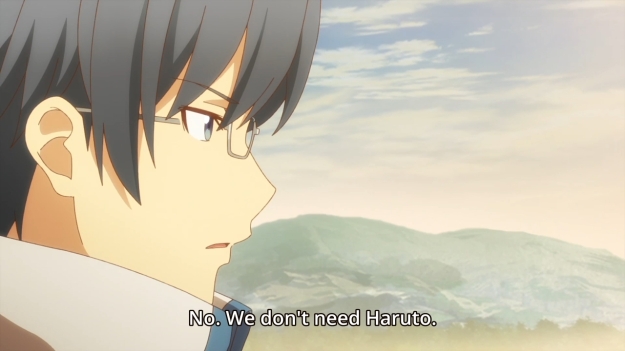 — But I guess what really bugs me is how prevalent this sort of story has become. Takanori isn’t just mad about the fact that Haruto “killed” Asahi. He’s bitter because he’s been “cucked.” That seems to be the fucking verb of the last couple of years, because everyone’s super obsessed about it. Back in my day, if another guy wins the girl’s heart, you just walk away and accept your defeat. Nowadays, it’s cucked, cucked, cucked! Oh no, I got cucked! Goddamn, I fucking hate the internet.

— Anyways, Takanori wants Asahi to join his badass Illuminati guild, but she won’t come without Haruto. What’s sort of different about this MMO narrative — for now, anyways — is that Haruto kinda sucks. He hasn’t been playing the game for six years, so his “Sense” has waned or whatever. He’s weak. All he can do is help his friends out with starter quests. But compared to Mr. Badass Illuminati over here, he’s minced meat. I’m sure he’ll reawaken his true powers over the course of the series — because that’s just his destiny — but for now, he’s really ineffective. And I guess that makes this small aspect of the story a teensy bit fresh.

— After Takanori leaves, Asahi insists that she and Haruto can still reunite their old group of friends and reforge Subaru. Well, it would only make sense if her mentality hasn’t aged at all. She doesn’t realize, of course, that the rest of the group has pretty much lost all respect in Haruto. More importantly, she doesn’t seem bothered at all by Takanori’s attitude towards their former leader. Takanori was straight-up dismissive and disrespectful. Either Asahi’s still that immature or this is just bad writing. I can’t really tell, to be honest. As for Haruto, his facial expression is just like, “I can’t even…”

— Back in the real world, we see Satsuki visiting Asahi’s grave. As you can see, they’ve gone and made her rather busty for some reason. 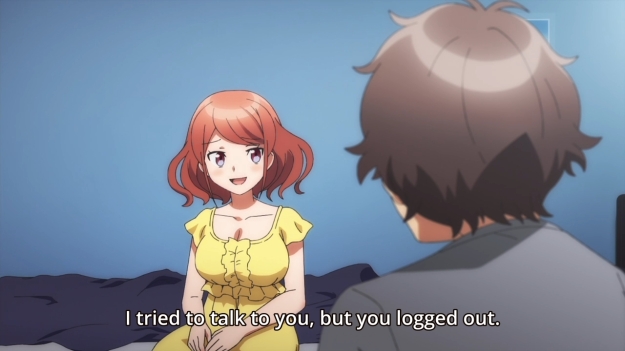 — She then decides to drop by Haruto’s apartment, because she had seen him in-game. We’re told that she was the only person to defend our hero six years ago. And yet, she still lost touch with him. So much for a childhood friend.

— Technically, Asahi is a childhood friend too, so I guess they all lose. She just lost her life.

— Anyways, Haruto tells Satsuki all about the resurrection of their Lord and Savior Asahi. She can hardly believe it either. He also reveals that he wants to commit MMO suicide. Oh no!

— Look at this goofy imouto. She so badly wants to pair her bro up with Satsuki. Can you blame her, though? She’s probably had front row seats to Haruto’s depression over the past six years. Little does she know, however, that Haruto is probably the classic dense hero, so even if he ever does come to grips with his feelings for a girl, he’d probably go for the dead chick.

— Anyways, Satsuki rushes back online to meet Asahi face-to-face. It’s like nothing has changed! The girl is reluctant to embrace her former guildmate with open arms. After all, if Asahi can reappear out of nowhere, she can also disappear out of nowhere. Satsuki doesn’t want to have to go through this loss again, and I can understand that. Unfortunately, I’m completely taken out of the moment when she speculates that Asahi might be a bug. I dunno, my job is pretty much to hunt for bugs all day long in software. The idea of a bug acting like a dead girl from six years ago is hilarious to me. That wouldn’t even be a bug if that ever cropped up in my software. That’s a fucking feature, baby! 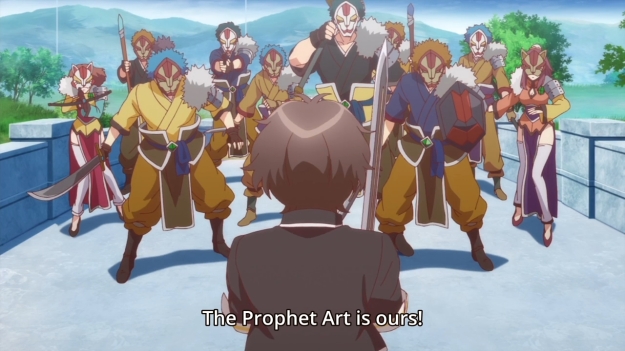 — Like before, Asahi attracts all sort of attention. Everyone wants a piece of her and her super overpowered Sense. I mean, I guess this makes sense, because we learned last week that you get some super lucrative reward for being a top player in Re’Union. But I almost feel as if that reward was conjured up ex post facto. I bet you anything the writer came up with this idea of the guilds desperately fighting for Asahi first. Then in order to justify this weird obsession with one player, we come up with this dumb idea that you can become an executive candidate in real life for winning a stupid MMO.

— But like Takanori, Satsuki has continued playing this game for the past six years. She’s strong as hell, so she easily lays waste to these attackers. Hoo boy.

— Speaking of Takanori, he interrupts a meeting full of players who also want to get their hands on Asahi. He finds it weird that the entire server seems to know about the girl’s sudden return already. You know what else you should find weird? A dead girl has come back to life! But yeah, sure, let’s talk about how there’s possibly a conspiracy out there instead.

— Satsuki takes Asahi and Haruto back to their old base of operations. The dead girl whines that her items are all gone. I mean, her real body is also gone. She should maybe worry about that.

— That ring that Satsuki had gifted to Haruto at the start of the first episode? He just left it sitting on some shelf. When she tells him that she had wanted him to wear it, he replies that it wouldn’t have been useful for that quest. Yeesh, talk about adding insult to injury.

— While Satsuki and Asahi reminisce, Haruto wanders off to reflect. Like, literally reflect. Look, he’s staring at his reflection in the water. Isn’t that great? 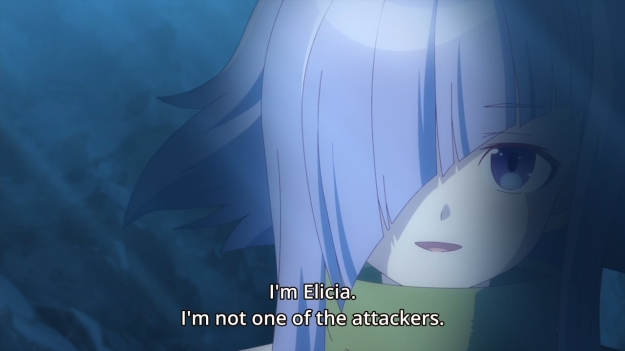 — This mysterious girl then shows up out of nowhere as if she’s been waiting for him to come to this very spot all along. Wow. Amazing. Fantastic.

— Not only that, she’s an empath. That’s right, her Sense is the ability to read other people’s minds. What? So in this fucking MMO from the future, certain individuals simply have the ability to hear what you’re thinking? What is this nonsense?

— The mysterious girl then warns Haruto that he and his friends will soon be attacked from all sides. Serious business, y’all. I told you! I told you! Nobody listened, but I told you!

— As the girl disappears whence she came, she ominously tells Haruto to face his past. Oh lord. It’s a fucking game, man.

— At the moment, everything about this show is ridiculous.