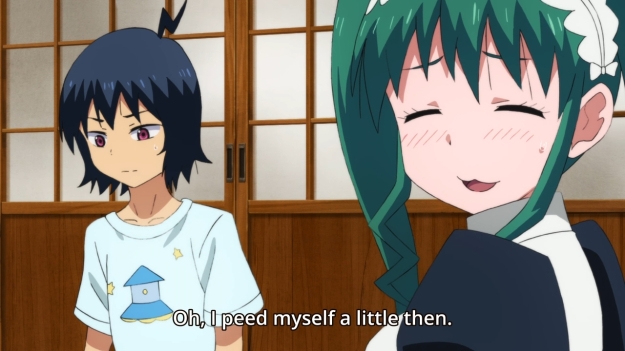 It’s gonna be a while before the story fully explains itself. In the meantime…

— We already know that an ugly dragon destroyed Soya’s planet. So those powder stuff that the Grand Paladins carry on them? That’s apparently a portion of the dragon’s power. This explains why he’s so pissed at them.

— Soya ignores Ginko’s advice and tries to pick a fight with all of the Grand Paladins at the same time. He quickly realizes, however, that this isn’t a battle he can win. As a result, he tries to take out the director real quick. Unfortunately, Takashi also has a mecha of his own. Welp.

— He also looks super evil here. I mean, he already looks evil, but super evil now. The director is super strong, too. Unlike the others, he has this mega fuck-you beam that can carve giant swaths through the planet. Let’s hope it didn’t anyone who just happened to be in the area.

— The 3D action sequences look good, I guess. I still prefer 2-D, though. I just feel like there’s something inherently missing in 3-D animation. It’s like the difference between listening to a vinyl record or the perfect digital copy of a song. Sure, the former is full of imperfections, but that’s what I love in the first place. When you take them all away, what we have left feels a little sterile. And yes, I feel the same way about Pixar movies too.

— Anyways, Soya is clearly outgunned and outmatched. Out of nowhere, a giant version of Sensei appears from the sky and proceeds to toss Soya into its mouth. Ginko quickly follows suit. The cat thing then sits down and proceeds to scratch itself. Okay then.

— In response, the director tells his team to fall back for now. That’s… that, I guess. Battle’s over. We’re not even going to try and poke the giant cat thing. 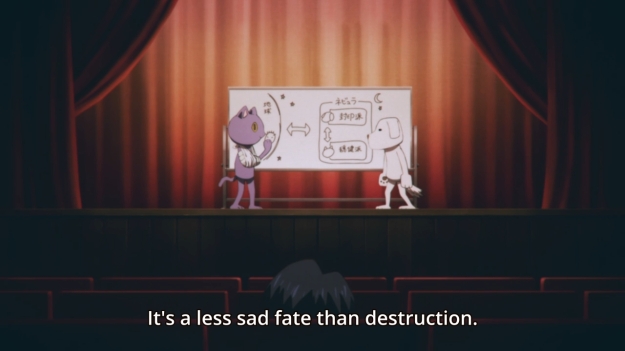 — In the aftermath, Soya gets to watch a debate between Sensei and His Excellency (voiced by Norio Wakamoto, apparently). In his lap is a bucket of fried chicken, so you know that this has to be a dream sequence of some sort. These two anthropomorphic animals are Kigurumians, an alien race that supposedly wants to protect other galactic races from themselves. They either seal a species’ evolution completely (the extreme option), or try to curtail the power hungry aspect of their evolution (the option that Sensei appears to favor). Obviously, the less extreme option is not always so successful. Soya is originally from Sirius, which got destroyed due to the dragon and the Siriusians’ powers going out of control. Sensei has pretty much taken him in, because the boy has special powers. Also, probably guilt. Cat dude blames himself for not being able to save Sirius. So yeah, that’s the story in a nutshell.

— Naturally, we still have a couple unanswered questions. What is this dragon? How did its powers end up in the hands of a few Earthlings?

— Anime storytelling loves weaving these particular narratives. Oh no, humanity is a danger unto itself, so we have to choose between drastic option A and shitty option B! Obviously, option A is too harsh. But in practical terms, option B often boils down to simply having faith. Yeah, it sounds useless, but next to option A, anything looks good! In Persona 5, the kids end up putting their trust in the adults. The problem here is that these are the same adults who have been letting them down since the beginning of the story. We just somehow have to believe. Now that Sae has opened her eyes, she and other adults like her will somehow make society a better place! Yeah, sure. We only take this option, because… well, there’s really no viable alternative. You either choose between having faith in shitty adults, or complete enslavement at the hands of Yaldabaoth. Whoopee. And it feels like we’re at the same crossroads in Planet With. Sealing human evolution completely? Uh, what’s the other option again? Peas…? 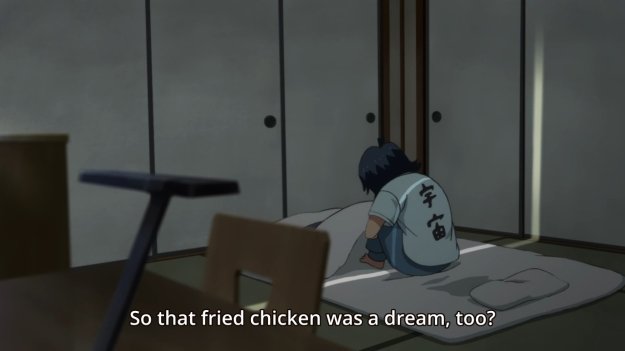 — Soya wakes up from his dream without even getting to taste the fried chicken. That’s what he gets for even paying attention to the debate onstage.

— In the morning, Sensei explains that the giant cat thing is his spaceship. That’s how he gets around the galaxy. And for now, he’ll just leave the thing sitting there in the wilderness. I guess nothing bad’s going to happen to it.

— On the news, Soya sees Nozomi being interviewed. She actually spends a good chunk of it talking about the kid, because she’s worried about him. This convinces Soya that maybe he should go back to school. Hell, I’m surprised that the administrators haven’t tried to get in touch with the kid’s parents. I know that he doesn’t have parents, but do they? Wait a minute, what do they know? How did he even enroll in the first place? Eh…

— Elsewhere, Harumi is taking out her rage on Hideo. She’s determined to avenge Miu.

— If I were in their position, I’d find myself in a bit of a quandary. Why did the kid call us invaders? Why does he think he’s an avenger? What is the power of the dragon? I’d want to get to the bottom of these mysteries before proceeding. After all, I wouldn’t want to be a baddie, now would I? We just made contact with the enemy. Wouldn’t we want to try and talk this out? Wouldn’t we want to try and understand each other a little better? Unfortunately, none of these characters seem to give a shit about any of this. Again, Harumi is simply determined to avenge Miu. And as far as her teammates are concerned, I have no clue what they’re even thinking. Basically, all I’m trying to say is that I find it difficult to really care for any of these characters. They don’t feel fully fleshed out. They’re just playing their specific roles in the story, and that’s really disappointing. 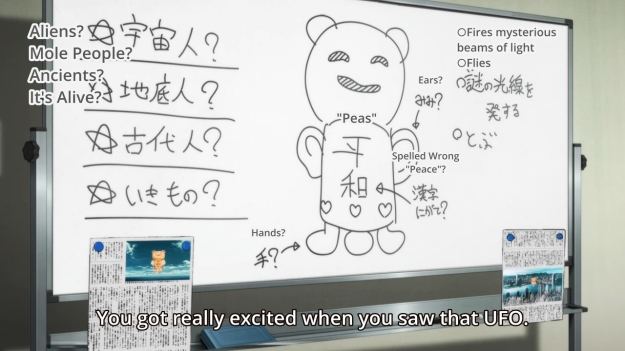 — At school, Nozomi quickly drags Soya to a clubroom full of occult-related stuff. I guess she wants him to feel at home. This girl soon enters, and she’s none other than the club president.

— Nozomi then whips out paperwork that she had already filled out for Soya, so he’s now an official club member. She must have forged his signature or something. The club president then hides the paperwork around her chest to make it too awkward for the kid to get them back. I just… I don’t get it. He’s been missing school for days, so the first thing Nozomi does when he shows up is force him to join a club? In fact, she had this all planned out. Like, who does that?

— Enter Justice (that’s apparently his name), one of the Grand Paladins. He just happens to be a member of this Occult Club as well. But like Hideo, he has no clue that the so-called Nebula Soldier is sitting right in front of him.

— This part of the episode is kinda boring. The club doesn’t really have any official activities. You kinda just show up and do whatever you want. And like Hideo, Justice gets the feeling that he’s met Soya before, but he can’t quite put his finger on it.

— Speaking of which, I can’t seem to find the club president’s name at all; she’s not listed on the Characters page on the anime’s official site. I guess she’s a nobody.

— Afterwards, Soya gets to walk home with Nozomi. The girl seems to have taken an instant liking to him even though he can’t remember how to say her family name. Those alien charms are irresistible. But seriously, the story doesn’t really explain why she cares so much about him. Maybe he’s hot or something. 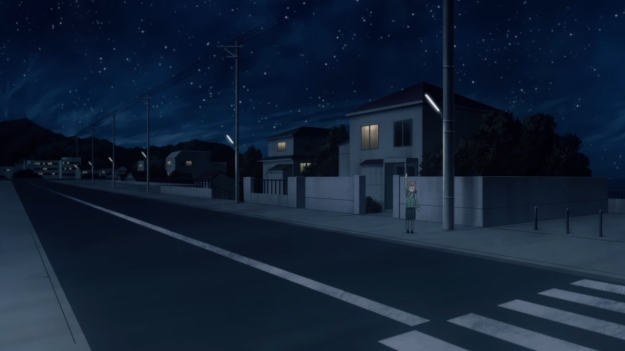 — They even keep waving at each other as they separate. It’s cute, I guess.

— Unfortunately, the peaceful evening is interrupted by yet the appearance of more Nebula Weapons. This time, we’re dealing with giant, upside-down babies. Yep.

— Benika mentions how Kogane seems to know a lot about these Nebula Weapons. Unfortunately, they’re in the middle of a mission, so the woman doesn’t press the issue any further. I just don’t understand how this hasn’t come up before. “You want me to use what to fight what? How do you know all of this?” I’m just sayin’, this should’ve been discussed right from the get-go.

— This time, two people try to destroy the core at the same time. Will this make a difference? We’ll see, I guess.

— Apparently, Harumi has always taken it upon herself to protect Miu. Maybe she even has a crush on her friend. Hm.

— None of these illusions ever appear to be very effective, though. Like what was the strategy here? Don’t fight — just become a princess instead? I don’t get it. I don’t really get this either. Who’s not afraid of whom? In any case, maybe Harumi’s lust for revenge is too strong for the illusion to matter. She quickly regains her senses and destroys the core, and just like that, the giant, upside-down babies are defeated. That was fast.

— Unfortunately, Justice didn’t fare too well. The hell happened to him in there? In any case, this is the cliffhanger that the story wants to end on for now. This week’s episode was alright, I guess. Nothing special. 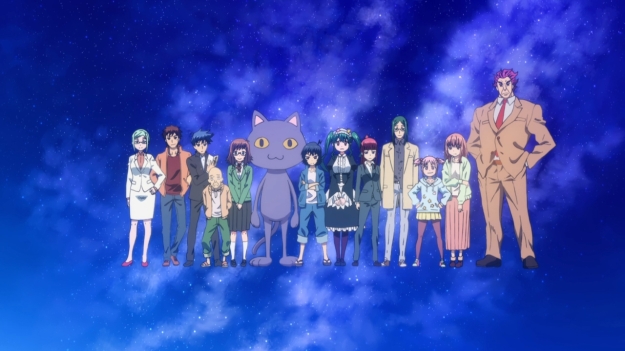 — In fact, Planet With‘s biggest weakness is its cast of characters. After three episodes, they still don’t have compelling personalities or motivations to get me to root for them.

1 thought on “Planet With Ep. 3: Some answers, more questions”