Everyone’s just so angry and hateful in this anime. It’s an unending cycle of violence.

— When we last left off, Eiji couldn’t locate Shorter, so he’s going to try and retrieve the vial himself. Unfortunately, he doesn’t realize that Arthur has been keeping a close eye on him for quite some time now.

— Does that black guy on the right really look like a gang member? A cast member for A Streetcar Named Desire? Sure. But a gang member? C’mon. This is one of the few flaws with the show’s art direction. MAPPA taken some liberties with the adaptation to make it fit the 21st century, but they haven’t done quite enough.

— Abraham finally gets his hands on the drug, and he’s as happy as a demented clam.

— Meanwhile, Arthur has no intention of setting Eiji free. Instead, he’ll hand the Japanese kid over to Dino for… salacious reasons. Why? Because he wants to ruin Ash. Skip is dead, the drug is back in Dino’s hands, and now, Eiji’s innocence is in trouble. Yes, Arthur’s hate apparently runs that deep. He hates Ash that much. Everyone’s just so angry and full of hate in this anime. Everyone but Eiji, that is.

— In the middle of all his gloating, however, Arthur failed to notice Shorter sneaking up on him. At first, it looks like our heroes might just prevail. Unfortunately, no one could have predicted Griffin’s sudden recovery.

— Not only has Griffin suddenly started standing up and talking, he recognizes Abraham. Looks like Dino’s also responsible for Griffin’s current state — as if Ash needed any further motivation.

— Freaked out by Griffin coming for him, Abraham takes out a gun and shoots the ex-soldier in the chest. In the ensuing fracas, Arthur takes the opportunity to slip away from Shorter. Even though Eiji is safe for now, Griffin is in critical condition. Not only that, the bad guys got the drugs back. Welp.

— It turns out Shorter did meet up with Eiji in last week’s episode after all.

— Back in prison, Max no longer wants to be cellmates with Ash. I guess he feels that guilty. Even so, he’s either foolishly negligent or downright immoral. I’ll explain in a bit.

— It doesn’t take long before another individual wants to take sexual advantage of Ash. Our hero, however, all but confirms that he only allowed himself to get raped in last week’s episode in order to end up in the infirmary.

— Nevertheless, when Max hears about Bull going after Ash, he freaks out. This dweeby guy has a point, though. What exactly did Max think was going to happen? Oh, I’ll just change my cellmates, and we’ll go our merry separate ways! That’s just stupid. Right from the get-go, it was obvious that the entire prison was gunning for the teenager. Either Max is stupid enough to forget this, or he just doesn’t care what happens to Ash. But according to his outrage in this very scene, he must care. He’s just dumb as bricks, then.

— I also find it odd how a large gathering has formed outside Ash’s prison cell. Look at all these inmates just eager to watch a teenager get raped. But that’s not the surprising part. I just can’t imagine how this could go down without drawing the prison guards’ attention. I know prison rape happens anyway, but I doubt the crime usually goes down with this much “fanfare.” But I guess this world is just that devoid of law and order. State of nature, man… state of freaking nature. 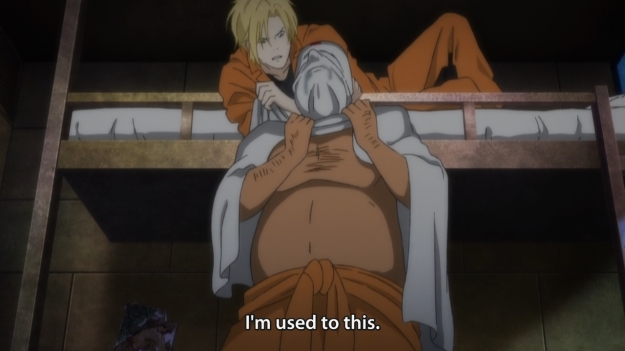 — Anyways, Ash has no problems defending himself against one guy. Even so, sexual violence is met with more violence. These prisoners cannot communicate. These prisoners are incapable of hashing out their differences like civilized men. You either fight back successfully or submit. This is the state of nature. Organized society has broken down. The rule of law has broken down. All that matters is one man’s strength.

— At the last second, Max convinces Ash not to kill Bull. After all, the kid wouldn’t want to be stuck in jail forever.

— The same could be said of Eiji, but we’ll get to that in a bit.

— It turns out the doctor had managed to keep an even tinier bit of the dangerous drug hidden. Even though the bad guys got their hands on one vial, he has the other one.

— And yeah, the drug makes you violent and susceptible to self-harm. But if you think about it, these characters are already doing this to themselves. They haven’t taken the drugs, but it’s been nothing but non-stop violence and self-sabotage from start to finish. Granted, we’ve only seen four episodes, but it doesn’t look like Ash needs to take any drug in order to spiral out of control. This is where we get cheeky and blame everything modern society! It’s America, man! America is what makes us the way that we are! This relentless and selfish pursuit of power and money only begets violence! The lack of communal shame is the only reason why things have gotten so out of control! Am I being serious? Hm, maybe.

— We cut to Ash rejecting Max’s help even though the latter could help him post bail. Doesn’t he want to get out of here? 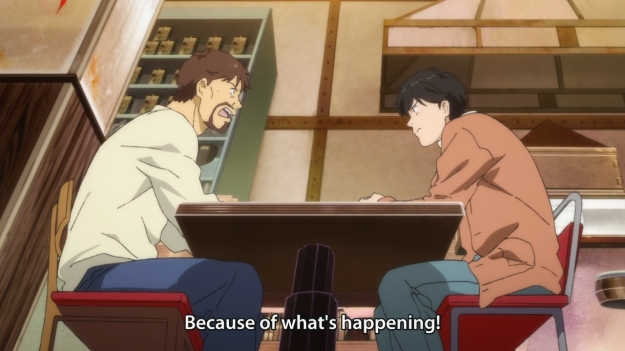 — Outside the prison, the same could be said to Eiji. Shunichi wants to get the kid out of America and back home to Japan, but Eiji refuses. Honestly, there’s no good reason for Eiji to stick around. Sure, he feels bad about Ash. Sure, he feels as though he owes Ash is life. But a pragmatic person would recognize his or her limits and walk away. He’s just an aspiring photographer from Japan. What the fuck is he thinking by getting himself embroiled in a conspiracy involving the Corsican mafia? Look at his goofy face. He’s the type that gets chewed up and spat out by the world. Nevertheless, why do people often flirt with danger even when they should know better? Because they’re undergoing a process of self-discovery. And in doing so, they feel an indescribable surge of energy that’s almost akin to a drug high. Eiji’s carving out a new identity for himself even if he doesn’t realize what he’s doing.

— Bad news: Griffin eventually succumbs to his wounds and dies. Boy, as if it couldn’t get any worse for Ash…

— Speaking of which, here’s Ash walking into an obvious trap!

— Here’s Ash fighting back, because… well, y’know, these people only understand violence.

— Again, Max has convince Ash to back down. Don’t take a man’s life or else you’d be stuck here forever. I mean, that’s just common sense, but when you’re a hot-headed teenager like Ash (not to mention all the shit that he has to deal with), I guess you just gotta cut him some slack.

— But eventually, Ash and Max come to blows. And again, it’s because words do not work. When both men are traumatized by the news of Griffin’s death, words have no chance of working. Ash simply cannot understand Max or his guilt, and no amount of talking is going to fix that right now. Ash has unbridled rage within him, especially now that he’s learned about his brother’s death, and he just needs someone to hate. For now, Max happens to be the most convenient target right for his hate. At the same time, Max is just Griffin’s former best friend. He can’t really help the kid sort out his issues. I’m not sure if there’s anyone who can. It would probably take years of therapy to undo the damage that’s been done to Ash. And even then, you can only glue the broken pieces back together. You can’t pretend that he’ll ever be good as new again.

— So when civilized men can no longer be civilized, what can do they do but fight? It’s the state of nature, man…

— Once both of them have let off some steam (and all their pent-up energy), they can finally calm down and talk things out. Imagine that.

— This time, Max can open up about Griffin without Ash instantly lashing out in anger. As a result, the reporter sounds genuine. He sounds authentic. Ash realizes that maybe Max isn’t such a bad guy after all. As a result, he also opens up to his late brother’s best friend. He also tells Max all about the vial of drug he had received, and how he was directed to a certain address in California. He says this all with tears in his eyes, too.

— I suppose these two have no reconciled. Maybe if they can get out of jail together, they can both look into this Banana Fish thing even further.

— Nevertheless, Max said something that made me raise an eyebrow: “Griffin couldn’t bear it and relied on drugs to get through.” As he says this, he downs a bottle of bourbon and even offers Ash a drink or two. He also needs feelgood chemicals to get him through the end of the day. Some chemicals just happen to be more potent than others. And look, I’m not trying to say that alcohol is as bad as, say, crack cocaine or the drug that ended up disabling Griffin. Rather, I’m trying to highlight the inescapable prison that these men have found themselves in. Not the literal prison itself, but the metaphorical prison of their shitty lives. Violence begets violence, hate begets hate. And at the end of the day, all they can do is numb their pain with drugs. Some men kill themselves with booze, others kill themselves quickly like Griffin. No one can seemingly just walk away even though it makes so much sense to us as viewers. Ash is still young; he’s got his whole life ahead of him. On the other hand, Max has a son. Even if he is embroiled in a bitter custody battle with his ex-wife, he’s got someone to live for. And yet, they’ve trapped themselves in this situation, and they can’t seem to find a way out. I know it’s early, but I can’t envision anything but a sad ending for one or both of these men.