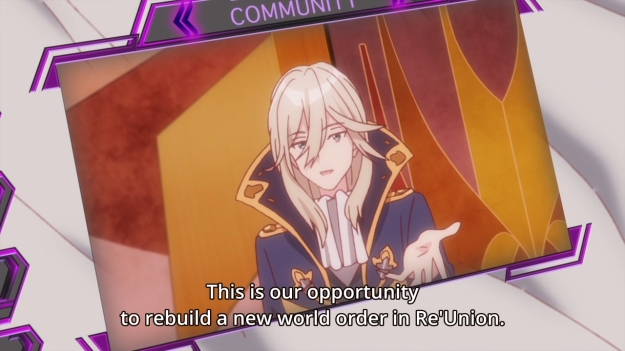 — As Haruto and Takanori fight over Asahi, the blue-haired, overly-obsessed freak proclaims his intention to stay by the girl’s side forever, i.e. he will give up on real life. Um, you guys know that this is a game right? You know you have to eat, bathe, and sleep in real life, right? You have to pay to put a roof over your head, pay for the subscription fee to the game, pay the electric bill to keep your computer running… the point is, you can’t just magically give up on real life. That’s not how it works, dumbass.

— The two boys still intend to clash when the barrier around them suddenly shatters. Satsuki managed to breach it, I guess. Asahi quickly points her gun at Takanori, which pretty much tells us whom she would choose to stay with if it really came down to it.

— Disappointed, Takanori turns and tells Satsuki that they should be partners in crime. Basically, leave Asahi to him, so that Satsuki can monopolize Haruto in the real world. Again, a stupid suggestion. As if Haruto would just walk away even if Takanori somehow manages to pry Asahi away from the guy.

— For now, the Illuminati leader leaves without causing another scene, but Satsuki also decides that she’s had enough for the day. After all, both Haruto and Asahi are too oblivious to understand what’s bothering her. I can at least give the girl a pass. After all, she hasn’t matured at all since the day she died. Maybe if she was mentally six years older than she is now, she’d understand Satsuki’s feelings. Meanwhile, Mr. Hero over there is just like, “Herp derp, she’s been acting strange! Oh wellz!” I know Asahi is real important to him, but shit, he’s so dense. I guess when Asahi died, he also went into arrested development.

— Meanwhile, Takanori and a girl who appears to be his secretary — “What do you play in that MMO?” “A secretary!” — talk about how they should totally team up with the other two guilds to form one megaguild. And by working together, they can kidnap the soul of a poor girl who hasn’t mentally aged since the day she died (six years ago!) so that they can do something something and overthrow the operating company, too. No, really. Takanori literally talks about how it’s totally possible for a megaguild to overthrow the operating company. I have no fucking clue what that’s about. Like really? That would be like the strongest WoW guilds banding together to… overthrow Blizzard? Like dude, remember when MMORPGs were just games? Remember when you undertook quests just to have fun? Just to level up? Just to gear your e-Barbie doll out with giant shoulder armor because Blizzard’s art design is a joke? Remember when horndogs would log in and head straight to Goldshire just to have e-sex with yet another desperate loser on the internet? Remember?!

— Later that night, Satsuki remembers how she had bumped into Takanori that day. You know that day. That day when Haruto and Asahi had exchanged e-rings. Satsuki wakes up in tears and buries her face in her hands. I… I can’t even… Look, they were fucking grade schoolers back then, man. And all Haruto and Asahi did was promise to protect each other. But Satsuki and Takanori have to be all dramatic and turn this whole situation into 90210 or some shit. Do you honestly think people fall in love in grade school and stay together for life? Aye yai yai, dios mio.

— Speaking of Haruto and Asahi…

“Herr, she sure was acting weird!”

“Yeah, like totally! Let’s go keep looking for our other friends, though! I mean, I have the ability to log out and check up on her in real life, but fuck that!”

I dunno, it’s just funny to me how they’re kinda shrugging off Satsuki’s clearly distraught feelings. They want to unite Subaru back so badly by locating Clive and Nozomi, but they’re losing sight of the fact that they might lose someone they already have.

— Anyways, the two of them head to some far-off village to search for any clues whatsoever regarding Clive and Nozomi.

—  Again, Asahi is worried about Satsuki, who still hasn’t logged in. On the other hand, Haruto is staring at his broke-ass sword. “Herp derp, I wish I had a stronger sword!!!!”

— Finally, Satsuki shows up, but y’know, nothing ever gets resolved because nobody communicates their feelings. So much for being such close-knit friends. Again, I excuse Asahi, but Satsuki isn’t helping her cause either. She merely tells her friends that she’s been overthinking things. Well, y’know what? If you never ask for what you want in life, you’re never going to actually get what you want in life. Gee, I’m gonna sit here and hope that my boss gives me a raise one day. I really, really hope he does! And maybe if I stare at the cute girl in the other department, she’ll realize that I could totally be her Prince Charming! Stare, stare, stare!

— All of a sudden, a strange fog swallows the trio up. Before they know it, they’ve been separated from each other by magic. Satsuki finds herself surrounded by… ah, fuck it. Who gives a shit what the name of their guild is called? It’s those French-looking assholes.

— So that means Takanori has Asahi all to himself. Not creepy at all. I, too, am obsessed over a dead girl from my childhood. Humbert Humbert was the same way, and look how well he turned out!

— Satsuki gets a message from Takanori, and he suggests that they each try to abscond with the targets of their affections. The guy will keep Asahi to himself in the MMO world. Meanwhile, Satsuki can keep Haruto to herself in the real, lame-o normie world. But wait, how would she convince him never to touch Re’Union again? Well, Takanori intends to kill Haruto’s in-game character, which apparently means he can’t just create a new character and log back into the game or something. What a shitty business model.

— In the end, however, Satsuki rejects the nefarious plan. As conflicted as she is, she won’t betray Haruto and Asahi. And while she’s making some triumphant speech to herself, daggers fly out of nowhere and start incapacitating her enemies left and right. Hm.

— As for Haruto, he’s able to drive the enemy leader back. Even though he looks like he’s wearing starting gear and the other guy is decked from head to toe in the finest armor that his guild can farm for him, Haruto is still somehow superior! Even the enemy leader is like, “Yo, you are so hot, dude! Your moves are so fresh!”

— Finally, we cut to Takanori and Asahi. The girl is a child, so she just keeps saying the same thing over and over. Let’s reunite Subaru! Let’s be friends again! I don’t want to understand that things have changed while I was dead! Time didn’t pass for me, so wah wah wah! But hey, she’s a child so whatever.

— As for Takanori, he’s willing to drug the girl just to get her to shut up. Like e-chloroform.

— Unfortunately, he’s been betrayed! The other two guilds had plotted behind his back to steal Asahi away from him. Takanori quickly realizes that the fog has brainwashed his army, and they’re now stealing Asahi away! Oh no! Before he can stop them, they’ve flown off on a giant bird with the girl.

— Victorious, the other two guilds quickly announce to the entire server that not only are they uniting to become that one megaguild — except, y’know, without the Illuminati — they also control the legendary Prophet Arts! And with Asahi’s special Sense, they can… they can what?

— We immediately cut to Satsuki and Haruto standing around in an inn room. See? I told you Elicia would just disappear from the episode. More importantly, Haruto wants to attempt a one-man rescue mission against a megaguild that numbers 3,000 strong! He tells Satsuki not to come along, though. Why? “Herp derp, something is obviously bothering you, so you can’t use your Sense properly. But am I going to try to figure out what’s bothering one of my closest childhood friends? Naaaaaaah.” 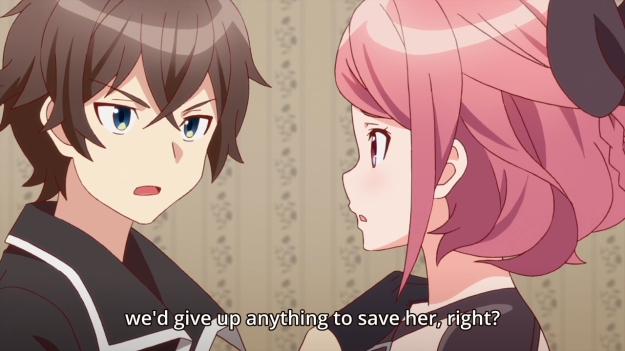 — He then argues that they would have done anything they could to save her six years ago. And that’s what he’s going to do right now. But hey, if he fails, she can team up with Takanori! Ah, hilarious.

— I do agree that Asahi needs to be saved. She can’t log out, and apparently, these weirdos can force her to use her powers over and over. Asahi is some sort of MMO slave or whatever. I don’t understand it, but that’s how it is! But man, could Haruto shit harder on Satsuki’s feelings if he tried?

— So yeah, there he is. There’s our hero. He’s going to try and storm that stronghold to rescue Asahi all by himself.

— Meanwhile, there’s literally all these people standing there, waiting eagerly to stop him. Guys, guys, make sure you log into the game tonight just to fight against one man! No, I don’t care if your static has something planned tonight! I don’t care if you have homework! We gotta… we gotta install a new world order, bros. C’mon~

1 thought on “Shichisei no Subaru Ep. 5: Remember when MMORPGs were games?”