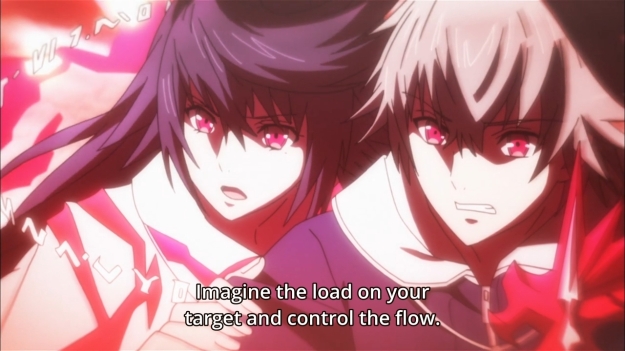 — When the episode begins, we see Chihiro spraying red lightning from his right arm. Um, okay. Apparently, our hero has already decided to go along with the Church’s plan, i.e. destroy Tokyo. He’s already destroyed two, but because he’s new at this, he’s straining his fragile body. Nevertheless, Chihiro insists that he can keep fighting. Why? Because he doesn’t want anyone else to be turned into freakish monsters. Fair enough… but can we honestly trust the Church? When have we ever been able to trust the Church in a Japanese story? Seriously.

— Meanwhile, the old man in charge of the bad guys get on Yuri and Jun’s case. They’re not doing a good enough job at stopping the Church, I suppose. We also find out that the old man is none other than Yuri’s father, and she must save him. From what? Shrug. Don’t expect the story to explain anything.

— Back at the Church, Inuki convinces Chihiro to take it easy for now. Shoko is not impressed. Just more reasons why we shouldn’t trust the Church.

— As soon as Chihiro tries to leave, Isshin pops out from behind a corner just to start shit-talking. Blah blah blah, you like violence, you like murder. Nobody explains anything. Obviously, he’s referring to an incident in the past — an incident that Chihiro was involved in. Hell, it was probably an incident that he was responsible for. But even though the story has been hinting at it for the past four episodes, it still refuses to shed any real light on whatever the hell it’s talking about. 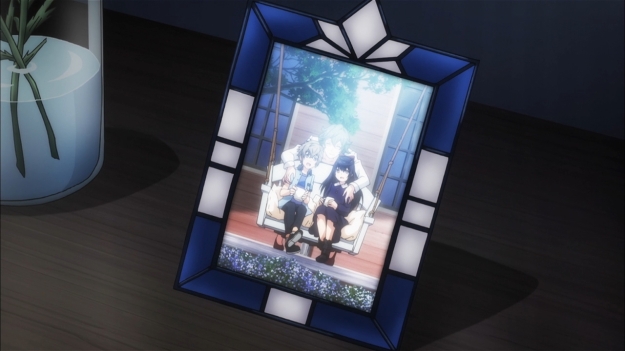 — Likewise, we cut to Yuri staring at an old picture of her and Chihiro together with an adult I can’t see very well. We already suspected that she and Chihiro had a shared history. But what is that shared history? What does he mean to her and vice versa? Who knows! After four episodes, we still don’t know a goddamn thing about our hero and his past.

— All we get are these “disturbing” dreams.

— Meanwhile, the story is content to throw new characters at us. I mean, some of them are technically not new. We’ve seen these two before. But my point is that we have enough characters as it is.

— Now here’s a new character for sure. Which side does she belong to? Shrug! I hope it’s not a whole third faction, though!

— Anyways, Chihiro aims to destroy another barrier later that night. If you destroy all the barriers, Tokyo will collapse and the bad guys won’t be able to draw more monsters into this world or something. Kotetsu tags along as backup, I suppose. It seems like no one else can do anything about the barriers. I guess we’ve already decided on Chihiro becoming the Dude of Red: The Red Dude. I mean, I know that’s what he’s meant to become, but nobody else is gonna try to usurp the throne?

— This time, the bad guys do show up to try and stop Chihiro. This means Jun gets red shades. Yay… Also, I only know his name is Jun by checking the show’s official site. 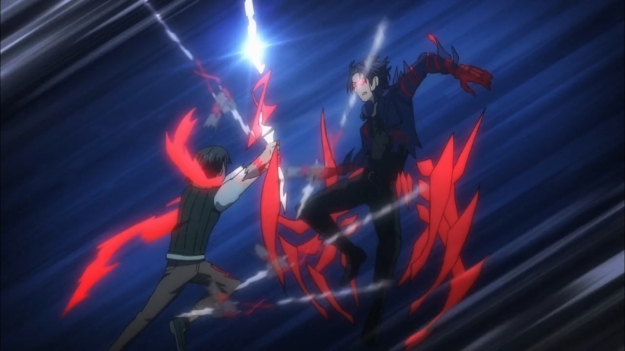 — Amazing. As you can see, this show has some absolutely jaw-dropping animation.

— I like how Chihiro asks stupid ass questions like, “What are they doing here?” They oppose you. What the hell do you think they’re doing?

— His arm reminds me of those flame hazards in Super Mario Bros 3. Basically, it looks bad.

— Somehow, Kotetsu finds himself fighting the new girl. Her name is Tsubaki, by the way. And yes, she belongs to a third faction. Sigh. Oh well, at least the third faction has cute summons or whatever the hell this thing is.

— If you check the official site, you’ll find seventeen profiles on the character page. Seventeen. C’mon, you only have one cour to tell this story, and you want it to involve seventeen notable people? Gimme a break.

— Despite Yuri’s best efforts (read: not), Chihiro manages to get an attack off on the barrier anyways. All of a sudden, a great pillar of purple light engulfs both him and the girl. They soon find themselves in some empty shell of Tokyo. 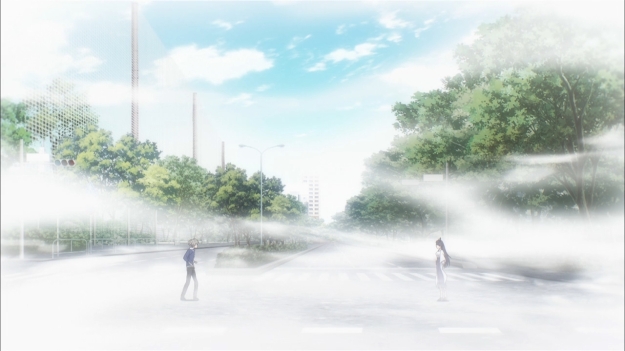 — Welp, now that they’re stuck in this hellhole together, they may as well talk, right? This is what writers often do when when two enemies aren’t supposed to be enemies. They contrive a situation in which two characters are trapped together. As a result, the characters can’t help but discuss their opposing viewpoints. Unfortunately, you’re not going to get much of a scintillating debate from our two lovebirds.

— Yuri tells Chihiro that if he destroys Tokyo, the people currently living in Tokyo will also perish. Doesn’t he care about them? Sorry, but her argument holds no weight when her faction literally goes around and turns innocent people into monsters. Like, is she even listening to what she’s saying?

— Oh dear, look at Cerdid’s legs. This animation is amazing.

— Yuri then tells Chihiro that it wouldn’t be so bad for the two of them to die here. Why? Well, she doesn’t mind as long as she’s with him, she says. With him. Does she explain why he’s important to her? No. Does he ask her what she means? No. Like a petulant teenager, he just goes, “Shut up, you don’t understand!” I’m facepalming so hard right now. What is wrong with you people? If someone said that to me, I’d want to know what the hell they were talking about.

— The guy then goes on and on about how there’s no salvation anywhere (Uh, okay…) but he might be forgiven if he keeps fighting (Huh?). Then he goes on say that he doesn’t care if a world full of despair is destroyed. I thought he was doing this because he didn’t want more people to be turned into monsters. So instead, he’s going to destroy all of them. 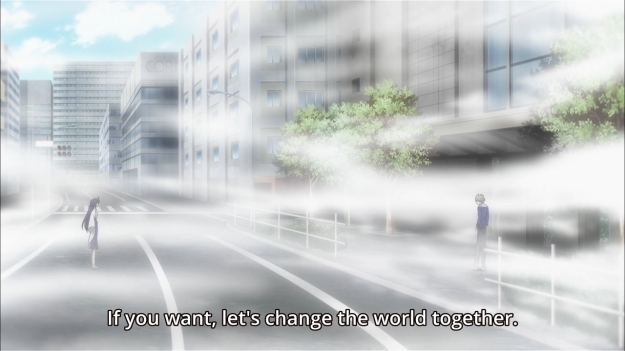 — Hearing this, Yuri tries to recruit Chihiro to her side. Let’s change the world together, baby! But people usually lay out the facts when they attempt this. You want to do X, Y, and Z, and if you succeed, you’ll achieve A, B and C! But she doesn’t explain anything. Unlike, say, a cliched bad guy, she doesn’t even try to explain why her faction is right. I’ll vouch for you, she says. Vouch for what? If you think the Church are the real baddies, why don’t you explain why? These characters aren’t really talking to each other. They’re just talking past each other.

— Back in the real world, Nurse Koume is now fighting Jun, but then Haru swoops in out of nowhere to lend a hand. I guess the new guy is the reinforcement that Yuri’s old man was referring to.

— Meanwhile, Tsubaki and Kotetsu are still going at it… until she learns that he’s not actually an agent of Chaos. And just like that, she stops fighting him and bails. So her faction is cool with what the Church is doing? Beats me, ’cause this show explains nothing!

— Yuri finally decides to help Chihiro escape even though this means he’ll just continue on his foolhardy mission to obey the Church. This means we get more shitty red blood fire thingie, but this time, Yuri will help him aim his “gun.”

— As she guides his aim, she says, “Imagine the load on your target and control the flow.” What is this? Money shot tips and tricks? 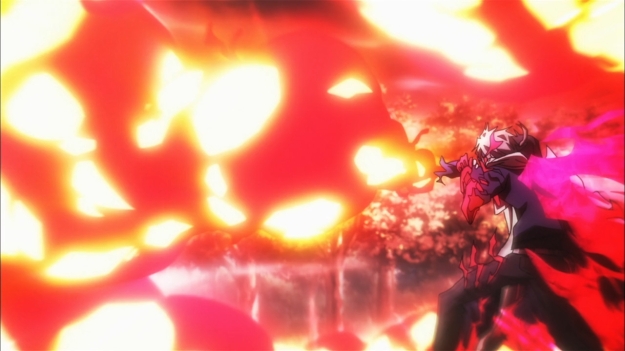 — At first, the flame is like this! But after imagining the load on his target, Chihiro manages to control the flow like so! 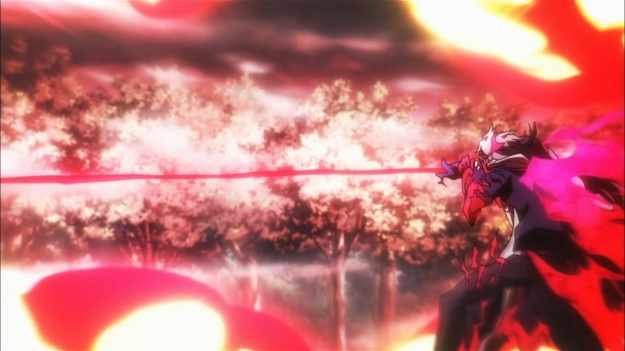 — When Yuri wakes up back in the real world, Yuri tells him, “It’s all because of your mother,” then walks away. What’s because of his mother? What? Don’t you dare walk away, woman! Explain your–… ah fuck, the episode is over. Great.

— I can’t believe a show like this is actually getting a dub.