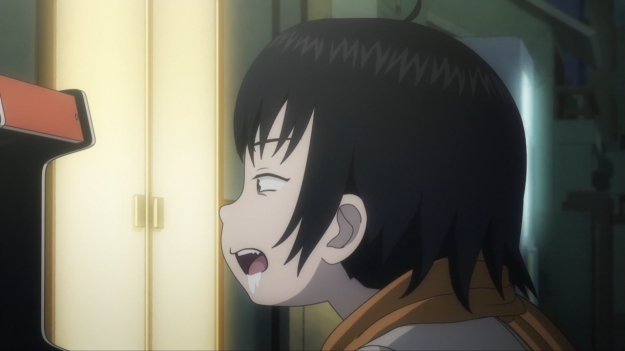 Who would ever guess that this drooling, game-obsessed kid would have such an easy time with the ladies?

— We fast-forward to 1993, so we have hit arcade games like Super Street Fighter II and Virtua Fighter. But like I’ve said in previous posts, arcades weren’t big in the ‘States. As a result, I remember 1993 for games like Star Fox, Super Mario All Stars, and Mega Man X.

— We see Haruo (now in eighth grade) bemoaning the high cost of the Virtua Fighter cabinet. That’s another reason why I could never find myself falling in love with arcade games. They just got way too expensive. These days, people complain about pay-to-win, but those arcade games were designed in such a way to milk money from you. You had to “git gud” if you wanted to honestly have fun, but I just couldn’t afford it.

— What’s also interesting is that arcades are known for attracting delinquents. Maybe my memories are betraying me, but they certainly don’t have that stigma in the west.

— A blonde girl watches as Haruo tries to discretely sneak away from the arcades. Apparently, Japanese school administrators like to patrol these youth hot spots to punish their students. Even if school is out, they’ll get on your case about it. That’s one major difference Japan and the US.

— Anyways, the blonde girl’s name is Koharu, and she appears to be Akira’s foil in a lot of ways. They are, however, creepily similar in all the important ways as well. But we’ll get to that in a bit. For now, she finds Haruo… fascinating. 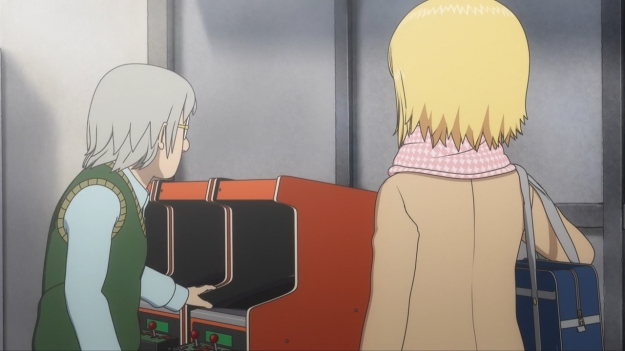 — Koharu returns home to find her grandfather installing some arcade cabinets right outside the family store. They apparently sell liquor there. Nevertheless, the old man would like to attract a few youths to the place. Odd. On the other hand, Koharu is concerned that the cabinets might attract delinquents. Again, it’s a cultural difference I can’t truly comprehend.

— As the day wears on, Koharu continues to think about Haruo and his goofy face. He seems to inexplicably draw certain girls to him, doesn’t he? He’s like the manic pixie dream guy for them. They need fun, and he can give them fun.

— Not much has really changed with the kid. Koharu thinks about how Haruo doesn’t put much effort into either his schoolwork or his future (what’s new?). But what’s important is that he always seems to be enjoying life, and like Akira, Koharu wouldn’t mind relaxing a bit every now and then. She ponders this as she tries to factor polynomials. Ah, the good ol’ days of algebra.

— The next day, a kid rats Haruo out to the class, so he ends up having to write an apology letter for hanging out at the arcades. Shrug. That’s just weird to me, but whatever.

— With this art style, even the teachers look like kids.

— Onizuka is still around, and she’s still as odd looking as ever.

— As soon as he thinks the room is empty, Haruo instantly whips out a portable PC Engine. Man, this kid is all about the PC Engine. I highly doubt the resolution was this good, though. 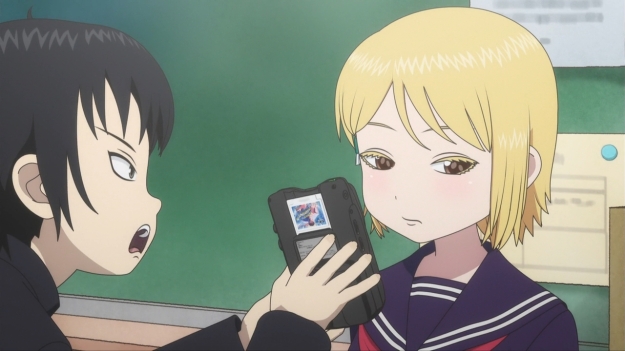 — He soon realizes, however, that he’s not alone. Koharu has cleaning duty, so she’s waiting for him to finish his apology letter and go home. Unfortunately, she makes the mistake of calling his portable console a Gameboy, so he goes on and on about stuff she doesn’t really know anything about. You never really want to get a single fact wrong around nerds. They’ll never let you hear the end of it.

— Anyways, Haruo ends up heading home without finishing his apology letter. When pressed on the matter, he confesses that he’ll just write a letter for not finishing the first one. That’s one of the key to relaxing and having fun: just don’t sweat the small stuff. Clearly, the apology letter won’t impact his life all that much, so he won’t fret over it.

— When Koharu can finally go home, she runs into that classic anime situation: she forgot to bring an umbrella. Instead of sharing one with Haruo like you might expect, however, he ends up inviting her into one of his safe havens: that dagashi shop that we had seen in the first three episodes.

— Like Eve being tempted by the snake, Koharu decides to try her hand at Street Fighter II at Haruo’s behest. Oddly enough, she even picks Zangief as her character. When the guy asks her why, she tells him that Zangief looked strong.

— Since Koharu isn’t a gamer, she struggles at first. But eventually, she somehow manages to win a match. Hell, she even pulls off one of Zangief’s special moves. Koharu just has a knack for fighting games, apparently. But unlike Akira, she doesn’t want to keep playing. After just one victory, she immediately begs Haruo to take over. She’s more content to watch him play than anything. It could be worse. At least she doesn’t hate games. 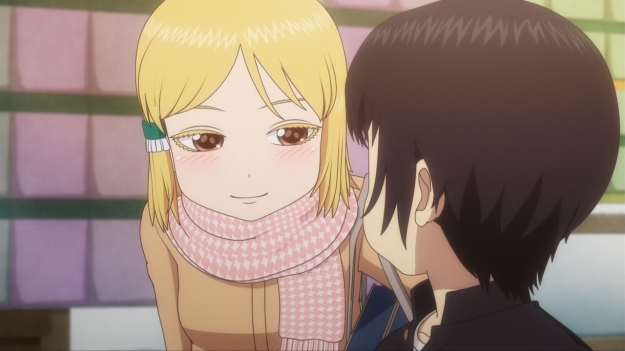 — If you’re a gamer, you hit the jackpot if you can find someone who also likes games. If they like to watch you play games, however, it’s still pretty sweet. At least you can share your hobby with them. Now, if they simply tolerate your gaming hobby, that’s alright, I guess. But there are some people who act as if video games are completely childish. They can’t even fathom why anyone would like to play games. Hey, to each their own, but a lot of these same folks will then turn around and tune into Netflix for hours every night, so I find it a bit hypocritical to hate on games.

— When Haruo and Koharu finally heads home for the day, he opens up about how the dagashi shop is going to close soon, so he’s been coming by everyday just to give the old woman some company. He’s just an inexplicably sweet boy, I guess.

— Having had fun just watching Haruo play games today, Koharu mentions how her shop now has some sweet new cabinets installed. The guy then gushes on and on about how he’ll drop by everyday during winter break. He even refers to her home as his future oasis. This makes Koharu’s heart skip a beat. Haruo’s the kind of guy who will inadvertently say things that will melt a girl’s heart without realizing it. He’s going to run into trouble with that.

— You can already see how this will play out. Koharu can talk, but Akira can’t. Akira can play games, but Koharu finds them somewhat scary. They both, however, seem to like the same guy. So what will happen is that Koharu will be able to confess her feelings to Haruo at some point in the future, but his heart will always belong to Akira. After all, you see her all over the OP. Do you see Koharu all over the OP? I think not. 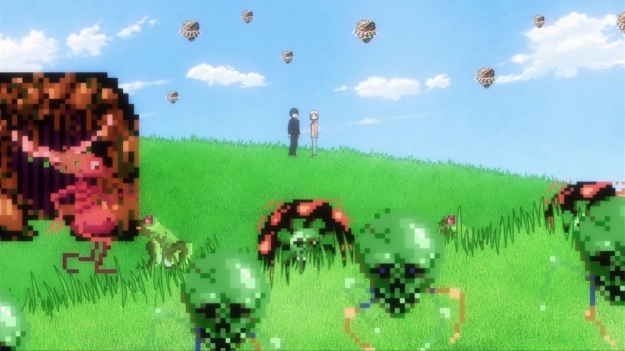 — Later that night, the girl even dreams about hanging out with Haruo in a video game. When she finally wakes up, you even see a booklet (or pamphlet) about arcade machines next to her pillow. Geez, she’s that smitten with him already?

— The next day, Miyao bugs Haruo about an upcoming Christmas party. The guy just wants to hang out with his bud, but Haruo only cares about games. Still, the kid relents and agrees to head to the party. When Koharu overhears this, she also agrees to go to the party. Apparently, she doesn’t like going to parties either.

— When the girl returns home, she keeps looking out her window every now and then to see if Haruo has dropped by. Young love, man. It’s so sickeningly sweet. Too bad you know this is a game that she can’t win. But hey, I hear the manga is still ongoing, so you Haruo x Koharu shippers out there shouldn’t throw in the towel just yet! You never know what might happen.

— After all, Akira is super rich. Her family would probably pressure her into an arranged marriage, huh? Even if she wanted to marry Haruo, I doubt they would approve.

— Just as Koharu is about to leave for the party, she finally finds Haruo outside her family store. He’s even drooling like an idiot. She doesn’t mind it too much, though. She’s just elated to hear that he actually lives in her neighborhood.

— The two of them are about to leave for the Christmas party — look how happy she is — when her grandfather (maybe it’s her dad, but I doubt it) runs up with the board for Super Street Fighter II. He had Haruo’s attention at the first mention of the word “super.” Way to dive bomb Koharu’s chances, old man. That’s why Japan’s birth rate is so low. 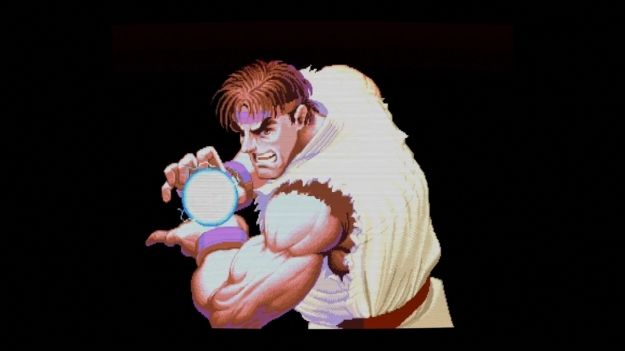 — Haruo can’t help but gush over the game’s fancy new intro. I didn’t get to touch Super Street Fighter II until much, much later (when it came out for the SNES), so combined with my lack of enthusiasm for fighting games in general, let’s just say that I wasn’t as impressed.

— At first, Koharu is a little bummed out that he no longer wants to go to the Christmas party, but it’s not like she wanted to go either. As a result, she ends up spending the night watching him play.

— Koharu even suggests a few titles that he could play for her, but he refuses. He wants her to give those games a fair shot before she comes to him.

— At the end of the night, she asks if they could exchange gifts. They were originally meant for the Christmas party, but considering how she knitted a pair of mittens, she was probably thinking of Haruo playing outside in the cold. The gift was probably for him all along.

— The girl then hides her face behind his gift, but she’s obviously blushing. Haruo’s too clueless to understand why, though. Nevertheless, this just gives me more reason to think that she’ll try to confess to him at some point. She can be honest about her feelings, and she doesn’t seem to have any major hang-ups.

— Koharu has a lot going for her. First, she can speak; communication is always important. Second, she does not get violent. I kinda like not being physically hurt every time I annoy my SO. Just sayin’. But at the end of the day, Haruo wants a kindred spirit. When he talks all day about games, Akira is actually interested. Koharu listens, but you can tell they don’t connect on that level. Moreover, Akira is like his rival. She challenges him. She makes him want to be a better version of himself. I don’t see that with Koharu. To be fair, it’s too early to really make any real judgment calls on her character, so we’ll just have to wait and see. 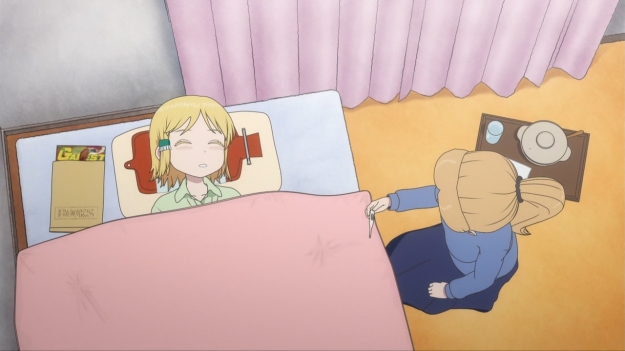 — The next morning, Koharu wakes up with a cold, but her fever’s not too bad. She’s just a little lovesick.