One by one, Soya has whittled down the Grand Paladins. Will Takashi’s old man be next?

— In the cold opening, Takeso reveals to Yosuke that Takashi is also an alien — an alien that looks exactly like us. The old man then tries to play it off as a joke, but it’s pretty obvious that the story is true.

— I wonder why the leader of the Grand Paladins want to rule the world so badly. I guess we’ll have to wait and see, because this is only the fifth episode. We still have a long way to go before we get to the ending, but it feels like the Grand Paladins are already on its last legs. Hm.

— Meanwhile, Soya reminisces over his (late?) brother at school. He hears from his club president that the school might get shutdown, because no one obviously wants to live in and around a battlefield. Sure, nobody has yet died somehow, but last week’s events may have pushed things too far. Up until the dragon destroyed a massive chunk of the city, most of the fights have been over water or away from civilization. Thanks to Harumi going out of control, however, the safety of the civilians can no longer be guaranteed. This is something that Soya has to consider going forward.

— Nezuya shows up, but he’s got some bad news. His family is moving away because his sister is scared of all the UFOs. As a result, he’s come to return all of the books he’s borrowed. Needless to say, he’s quitting the club. Everyone is almost dismayed to see Nezuya act so… normal. Soya feels as though something has died within the guy. I mean, that’s probably true. After all, the Sealing Faction’s aim is to neuter humanity’s spirit. Nevertheless, you could argue that maybe Nezuya has simply sobered up because he has to move away from all his friends. 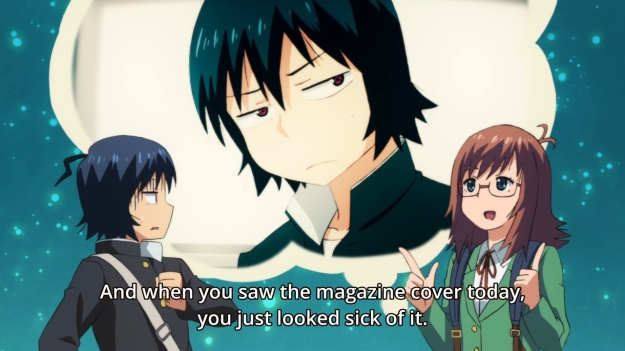 — Later that night, a sharp Nozomi manages to deduce that Soya might have something to do with all those UFOs. The kid freaks out and tries to run away. He isn’t sure if he’s supposed to keep his identity a secret.

— But Nozomi is super fast, so she catches up to Soya even though he had a head start. Not only that, she manages to tackle him to the ground. Hm, is she really just a normal schoolgirl?

— In any case, Soya decides to reveal everything. He tells Nozomi that he’s an alien. More importantly, we learn that humans and Soya’s race descended from the same common ancestor. Odd. Apparently, there’s intelligent life out there, and they all look like boring-ass humans. Oh well.

— Nozomi not only believes Soya, but she isn’t the least fazed by any of these revelations. Her main concern is that Soya continues coming to school. She’s even blushing during this entire scene. Ah well, at least her crush on Soya isn’t as inexplicable as Ryoko’s crush in Sirius the Jaeger. I just hope it doesn’t turn out that Nozomi’s also an alien or whatever.

— Oh hey, this street lamp even looks like a UFO.

— Right before Nozomi leaves, she thanks Soya for protecting the town. Ginko suddenly appears out of nowhere to confirm Nozomi’s sentiments. Eh, he’s only done it once. He’s going to have to keep doing it, too. I mean, what exactly does Sensei and Ginko have in mind? Once they steal away all those bottles, the Grand Paladins won’t be able to stop the Sealing Faction anymore. In that case, it’ll be up to Soya to do all the dirty work.

— The next morning, sirens blare. We have another invader. Takezo stares at a picture of his late wife before leaving to fulfill his mission. It’s just him and Yosuke now. They’re the only Grand Paladins left. Takashi still has Benika’s bottle, though. I wonder if someone else is going to make use of it.

— The silly UFO of the week is this… mishmash of stuff. At least it’s cuter than those dumb babies. Sensei and Ginko speculate that the Sealing Faction intend for this to be the final battle. Makes sense, I guess. The Grand Paladins are weaker than ever, so this might be good time to land a crushing blow.

— We get to see the Dog General monitoring the situation, but I assume he’s been doing this since the start of the series.

— Basically, the Sealing Faction extinguishes the passion in your heart. Their dreams try to make you feel not just fulfilled but complacent as well. You lose all competitive spirit, and if humanity lacks that, then it will collectively stop evolving as a species. On the other hand, the Pacifist Faction wants to somehow curtail humanity’s warlike aggression without also crushing their hunger? I dunno if that’s ultimately realistic.

— Anyways, the old man sees a harem of hot girls waiting for him when he heads inside the UFO. They also have a lot of booze and meat for him. Takezo takes the opportunity to relax for a bit, but he easily shatters the illusion. He is then greeted by his late wife, and he confesses that he’s only fighting because he’s all that Takashi has left. He doesn’t really approve of his son’s actions. Hell, he even acknowledges that his son makes a bad leader. Nevertheless, Takezo feels as though he can’t abandon his son. I don’t know if that makes him a good father. Rather, I feel like he’s just enabling his son. If Takashi drives everyone away from him, so be it. Sometimes, you have to let your kids burn themselves in order for them to truly learn their lesson.

— Takezo and his wife never had another kid, right? Well, I can only assume this. From what we’ve been shown, it looks like Takashi was their only child. He isn’t their biological child, though. Maybe the couple can’t conceive for whatever reason. And maybe this is why he’s spoiling his kid so much.

— The core has been destroyed, but the snake is a separate thing. As a result, it zips past the Grand Paladin and heads straight for the town. I’m almost curious to see what it would do, but we don’t get to see that. Soya immediately jumps into action to stop the snake. With the Grand Paladins greatly diminished, it’s now up to him to protect the city. Luckily, he manages to accomplish this in just one blow.

— Takezo immediately attacks Soya. After all, Soya’s going to try and take his bottle, right? So they may as well start fighting now. The old man wants to know why the kid is protecting the city. He also wants to know whom Soya is truly allied with. The kid answers, “I’m the friend of those I want to befriend, and the enemy of those I want to defeat.” That doesn’t really tell me anything other than that our hero’s self-centered.

— We don’t get to see the conclusion of that fight, though. That’ll have to wait till next week, because we have yet another epic clash to set up. Back at headquarters, Kogane ominously informs Takashi that “[t]he preparations have been completed.” Suddenly, the Dog General — she refers to him as Generalissimo — teleports in. Kogane has actually been working for the Sealing Faction this entire time.

— This is what I don’t get, though: if she’s really a secret agent for the enemy, what exactly was she trying to accomplish? Was she not helping the Grand Paladins defeat the UFOs by telling them what to do? The Grand Paladins are weakened not by her actions, but by Soya’s actions instead. So what was she really doing? I guess we just have to wait and see, because we don’t really know anything about the “preparations” that she speaks of. 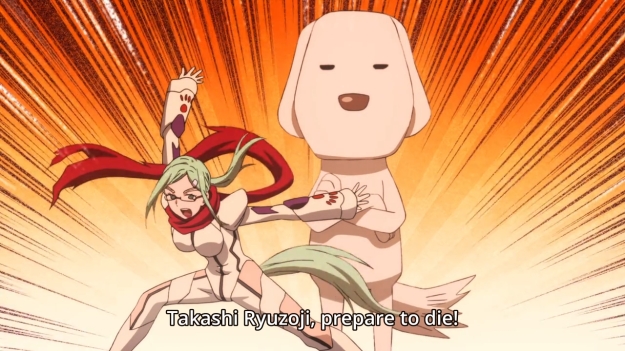 — Anyways, Kogane proceeds to hop into Dog General’s mouth much the same way that Soya hops into Sensei’s mouth. I wonder if Sensei even notices that his buddy is here, but I digress. In response, Takashi dons his armor, because he’s more than eager to fight the enemy. As a result, we’ll kick off with two fights in next week’s episode.

— Planet With is… it’s okay, I guess? It’s got some excitement, and at no point was I bored during this week’s episode. I guess if I have to complain about anything, it’s that I just don’t particularly care for the characters. I don’t hate them, but I have no real emotional connection to any of them either. I’m mostly here to see how the events play out, but I don’t really have a rooting interest in Soya. I can’t root for the bad guys, obviously; nobody wants humanity to get sealed. But Soya is not exactly an super relatable protagonist either. Oh well.