Class 1-A really took this down to the wire.

— The episode starts off with members from Ketsubutsu Academy taking stock of the situation. This is really just a way for the story to burn a bit of time by recapping information you should still have fresh in your mind.

— What we really want is to pick up where we last left off: Bakugo and Kaminari facing off against Shishikura from Shiketsu High.

— Every now and again, you get to see these random jobbers get taken out. It’s always amusing to see their hero designs. Like are they dressed in Chinese clothing because they’re Chinese, or…?

— Initially, it looks as if the hot-headed Bakugo can easily keep Shishikura at bay in a straightforward fight. Unfortunately, the weird flesh dude can gather up the scattered chunks without looking like he’s suffered any damage. So is really sending chunks of his flesh out? Does he not feel any pain when the bits get blasted?

— Bakugo is a bit careless and fails to watch his flank. As a result, Shishikura is able to sneak a chunk of flesh around the back. One touch is all it takes to turn someone into a meatball. Man, I hate one-hit kills. Don’t you? It just feels cheap.

— The problem with Shishikura is that he’s all talk. In fact, he seems to be in love with the sound of his own voice. You’d think he’d just finish the job now that there’s only Kaminari standing before him. Nevertheless, the guy yaps on and on about how the provisional exam is trying to raise its standards this time around. 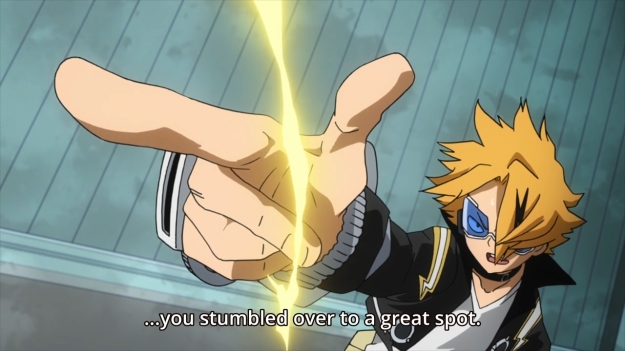 — Anyways, right before Bakugo was turned into a spicy meatball, he had tossed a grenade in Kaminari’s direction. This allows Mr. Chargebolt to move Shishikura near a Pointer, objects which allow Kaminari to focus his Quirk. This way, he won’t hurt everyone around him. He won’t have to be a lone wolf… y’know, like Shishikura. You think a guy who goes on and on about dignity and whatnot would care more about working together with the rest of his school. Bakugo doesn’t like teaming up either, but at least he isn’t standing there, spouting off self-righteous platitudes.

— Of course, Kaminari takes this opportunity to defend Bakugo some more. It’s what we’ve heard a thousand times before. The kid’s a dick, but he’s trying really hard.

— To be fair, the only person I truly want to fail is Mineta. I don’t particularly like Bakugo, but what really annoys me more is Deku’s obsession with being friends with the guy no matter how many times he gets insulted. It’s just pathetic.

— Anyways, the meatballs on the ground start enlarging, which means Shishikura’s grip on them is failing. It looks like he can’t take much damage. As soon as Bakugo and Kirishima return to normal, they get their revenge on Mr. Fleshy. This is yet another compelling reason why he should’ve stuck with his team. Man, so much for honor and dignity, huh? He looks like a joke now.

— Bakugo then turns and insults Kaminari. Ah, what a charmer.

— By taking out Shishikura, the boys also inadvertently freed all of these people. This means they have even more fighting on their hands. Bakugo doesn’t mind, though; he’s relishing the opportunity to pass the first round.

— Elsewhere, Todoroki is greeted by Momo’s gang. She managed to pass without having to throw a punch. While it would’ve been cool to see her throw down with an enemy, there’s something to be said about overcoming your obstacles without having to resort to standard fighting. The problem, however, is that when a real threat shows up, Momo and the lesser characters are often nowhere to be found.

— With the remaining spots for the second round dwindling fast, the rest of Class 1-A will have to pick up the pace. As a result, we immediately see Tape Dude and Uraraka lay down a sticky trap for their pursuers. Deku kinda helps, I guess. At least he’s taking a bit of a backseat in round one. He’s got all of round two to shine, I bet.

— One of the students beg Deku to let them pass, because they’re seniors and he’s not. That’s silly. More than anything, this needs to be a meritocracy. If you can’t hack it in these dinky exams, you’re just going to endanger yourself and others in actual battle. We’ve seen plenty of Quirks that can be applied in non-violent ways to make the world a better place. Not everyone has to be a standard hero who goes out and beats bad guys. You can also be a hero by feeding others, sheltering others, clothing others.

— And just like that, Deku and his buddies have passed. All he suffered was a minor cut on his cheek, too. Say, what happened to Camie (if that’s her real name)? Is she going to pass?

— There are still plenty of 1-A students still stuck out in the field, though. Iida even stumbles across Aoyama cowering in fear. 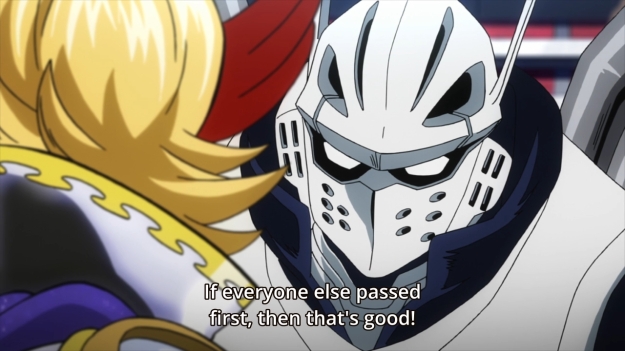 — The former is all wholesome and whatnot, so he’s making sure he can help everyone before he helps himself. Sometimes, Iida’s shtick can be really annoying like when he punched Deku in the previous arc. That’s why I’m not his biggest fan. But at the end of the day, he really cares for his classmates, I guess. You just won’t find me getting excited for an Iida-focused episode or whatever. Guys like him are kinda stale in the personality department.

— When Deku’s group meets up with Bakugo’s group, we get this cute, little dance number.

— As for Bakugo, he insults Deku at first, but then acknowledges his classmate’s abilities under his breath. I guess we’re doing the tsundere thing now. Jokes aside, Bakugo can totally mature. I don’t deny that. I just don’t get why everyone has to suffer his bad attitude while he takes his time growing up.

— Forget Deku x Uraraka! Now here’s a ship that I can support!

— But on a more serious note, Aoyama is touched by Iida’s compassion. As a result, he wants to return the favor since there is barely any room left in the second round. We have nine 1-A students out in the field, and only ten slots remaining. As a result, Aoyama starts firing his laser into the air. Like moths to a flame, enemy students start closing in on Aoyama’s position. This will allow Iida to score an easy victory. What Laser Boy doesn’t anticipate, however, is that he would also serve as a beacon for the remaining members of 1-A as well. They can’t do much on their own, but together, they can use their powers to pass the first around. 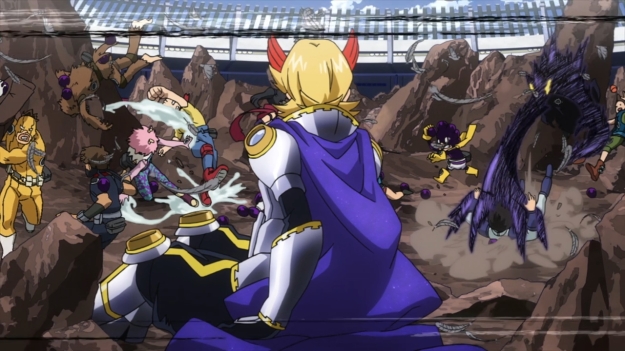 — And that’s exactly what we see. Aoyama watches as his friends join forces to collectively reach the second round. Even perv boy gets through. Yay, teamwork?

— Ten minus nine is one, so we immediately cut to Camie snatching one of the remaining spots in round two. Looks like she’ll get to flirt with Deku once more. Uraraka will be happy to see that.

— I initially thought Aoyama had said “twinkie,” so I kinda choked on my water a bit during this moment.

— Meanwhile, Aizawa is proud of his kids, but he tries to pretend otherwise.

— Back in the safe house, Yoarashi is shocked to learn that Shishikura is out. Camie also gets scolded for going off on her own. Hmm.

— Anyways, for the remaining 100 examinees, they watch as the field is suddenly turned into a major disaster zone. For round two, they’ll have to act like a hero and rescue people, but it can’t be that simple, right?

5 thoughts on “My Hero Academia Ep. 56: By the skin of their teeth”