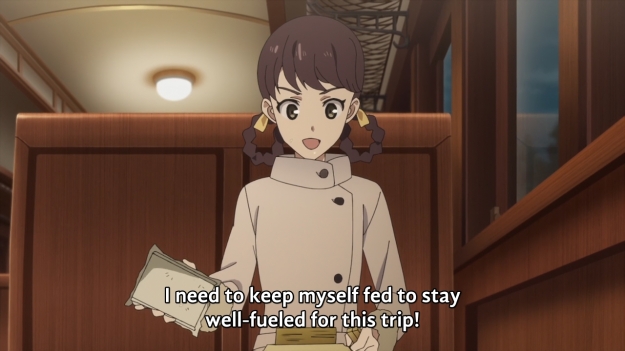 Ryoko is as crazy as I had hoped her to be. The girl tells her father that she’s headed for London, but she’s on the same train as Iba. Curious. Look, I doubt we’re going to see London anytime soon. I’m just curious to see what our spunky maiden hopes to accomplish in the middle of nowhere.

— Anyways, we learn right off the bat that Yevgraf had been the one to turn Mikhail into a vampire. So how does that work? Does vampirism trump lycanthrophy? Do you automatically cease to be a werewolf just because someone turns you into a vampire?

— Back in the present, Mikhail meets up with Yevgraf at some kind of ancient Siriusian temple. We’re told that they had an advanced civilization back in the day, but like always, they suffered a massive decline. Yuliy’s tiny village was probably the last surviving remnants of said civilization. Why is that? Look, it’s one thing for the glorious Roman Empire to decline, but it’s not as though all Romans disappeared along with them. But in fiction, ancient civilizations just disappear at the snap of the fingers. It’s ridiculous.

— Yevgraf does not have his loli vampires by his side. Instead, we have a dude who sorely needs a haircut. Needless to say, he’s here to provide the muscle.

— As Yevgraf and Mikhail journey into the depths of the ancient Siriusian temple (or shrine — whatever you want to call it), the former questions the latter’s inability to kill his kid brother. Well, considering what happens next, he should probably be thankful that Mikhail couldn’t carry out his mission. 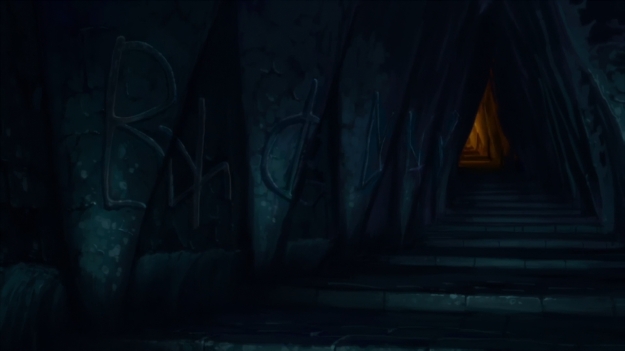 — We’re told that Yuliy and Mikhail’s father had taken the Ark here, because this holy land is the only place where the all-important artifact can be sealed. But why seal it at all? Like I said in the last post, if you’re not going to use the Ark, why is it necessary to keep it around? What value does this provide? I know it’s important to your people, but considering how potentially dangerous it would be if the Ark fell into the wrong hands, sentimental value can only go so far.

— Anyway, we finally arrive at an ominous pond full of red liquid. I doubt it’s blood, but you never know. Apparently, Yuliy and Mikhail’s father had sacrificed his own life to create this place. Odd.

— Elsewhere, Yuliy has finally reached Sakhalin. I’m not sure what I expected, but I’m a bit surprised to see that the place is as developed as it is.

— The rest of the Jaegers finally discuss Yuliy’s sudden departure from the team. Philip is the least happy of the bunch, which goes to show you that he’s come a long way. He used to butt heads with his werewolf companion, but now he’s the most passionate about going after Yuliy. Meanwhile, Dorothea and Fallon try to keep a level head. Despite all of Philip’s assumptions, it does sound like Willard intends to assist our hero in some form or fashion. Well, Yuliy’s like his own son, right? So you can’t just leave your son to die alone.

— Unfortunately for Yuliy, all he knows is that Yevgraf is here. He doesn’t have a clue where to find the Ark. Luckily, this guy in a cowboy hat is here to assist. He goes by the name of Bishop, and he’s a fellow Jaeger. He and his team had been trying to track down Yevgraf. Sadly, he’s the only remaining survivor. He had called for backup, which is why he assumed that Yuliy is here to help.

— Back in the dank red pit, Mikhail tries to retrieve the Ark, but every single step into the pool pains him. Despite his pleas, whatever’s left of his father is rejecting him. It’s clear that the Ark will not fall easily into the hands of the vampires. Still, Mikhail persists, because he hopes that the Ark will allow him to kill Yevgraf. The vampire, however, tires of this nonsense, so he forcibly pulls his servant back. A blood pact pretty much allows him to boss Mikhail around.

— Mikhail tries to retaliate, but Yevgraf overpowers him easily with just mind powers. The guy with the bad haircut then proceeds to deliver a blow strong enough to knock Mikhail out. Welp, that’s that.

— Still, this is why Yevgraf shouldn’t be mad about Mikhail allowing Yuliy to live. If Mikhail can’t get his hands on the Ark, Yuliy certainly can. See? We shouldn’t just to kill everybody that we see.

— Anyways, Bishop claims that he knows someone who might be able to tell them more about the Ark. The guy intends to break the Ark and kill Yevgraf. Yuliy, however, wants to protect the Ark. I don’t understand it, but it is what it is.

— Back in Tokyo, Baron Naoe hopes that his daughter will behave now that foreign influences aren’t around to corrupt her. Unfortunately, he soon receives a letter from Ryoko where she confesses her intention to travel to London and learn more about the world. More importantly, she wants to learn more about the vampire threat. What a crazy girl.

— We soon see where she gets it from, though. Baron Naoe sort of relents by agreeing to let the girl travel to her heart’s content. He, however, will follow her. Yep, just like that. On a mere whim, Ryoko’s old man will try and accompany her to London. The only problem is, is she even headed for London?

— We next see Iba on a train, griping about his latest mission. On the same train, just seats away from the guy, sits Ryoko and her bento box. Hmm.

— This old man in the woods is probably the person whom Bishop was referring to. Unfortunately, the Jaegers won’t be the only ones to pay him a visit tonight.

— During a car ride, Yuliy wants to know why Bishop has the stench of vampires on him. The latter claims that he’s killed so many vampires over his lifetime that he can no longer rid himself of the stink. Is that so? Hm, we’ll see. It wouldn’t surprise me if Bishop ends up double-crossing our hero. 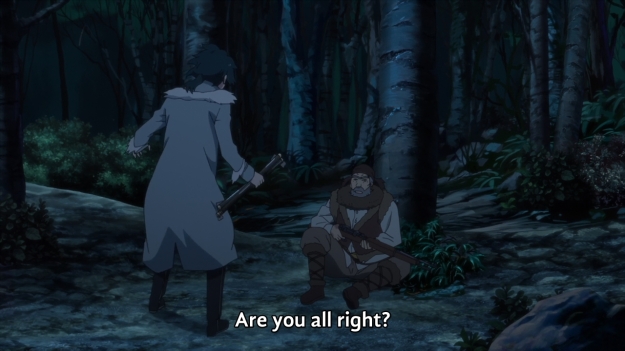 — When these two near the old man’s cabin, they see that they’re almost too late. The old man is busy fending off a bunch of vampires all by his lonesome. Yuliy thus hops out of the car first to try and assist. It just won’t be easy; he has vampire lolis to contend with.

— The girls proceed to taunt our hero about all sorts of things, i.e. being the last of the Sirius (this piques the old man’s interest), seeing his mother die before his very eyes, meeting his brother Mikhail after all this time apart, etc. More importantly, they seemingly want to form a blood pact with Yuliy. But that can’t be what Yevgraf wants, is it? Doesn’t he need a true Sirius to retrieve the Ark after Mikhail’s failure?

— But it doesn’t really matter, because this blood pact isn’t going to happen. There’s just no way Yuliy’s going to turn into a vampire. We’ll just have to wait till next week to see what happens next.

1 thought on “Sirius the Jaeger Ep. 8: Converging on Sakhalin”