It just won’t turn out well.

— Akechi says that the Phantom Thieves are now suspected of murdering Okumura. We last saw him in the ICU, though. So is he finally dead now in the adaptation or what?

— Futaba working her magic. It’s even a Sony-branded phone. I don’t think the game ever specifies what brand he has, but I could be wrong.

— In either case, Akechi “finally” joins the team, and he’s pretty unique because he has both bless and curse damage. Not only that, he also has the bless and curse instant death moves. That’s not all! He gets the Almighty nukes too. Yep, even Megidolaon at 67. Finally, as the cherry on top, he gets Debilitate at 70, but why on earth would you get him to 70? When you look over his move list, it’s a dead give away that, well, he’s too special. He’s not meant to be in your party for long, so we may as well use him to your heart’s content in Sae’s Palace.

— If Akechi somehow becomes a permanent party member in a re-release of Persona 5, I feel like they would have to redo his move list somehow. But y’know what, I don’t really want Akechi at all, but we’ll save that discussion for later.

— I do rather like the song in Sae’s Palace. As for the Palace itself, it feels like a mishmash of incongruent ideas. The central premise is sound: the house always win, so to win against the house, you must cheat in return. But somehow this involves doing all sorts of silly stuff like running around in the complete darkness. There’s also a part where you have to quit halfway through the Palace in order to continue further. I suppose this is similar to Madarame’s Palace, but to put it simply, you can’t beat this one in a single day. 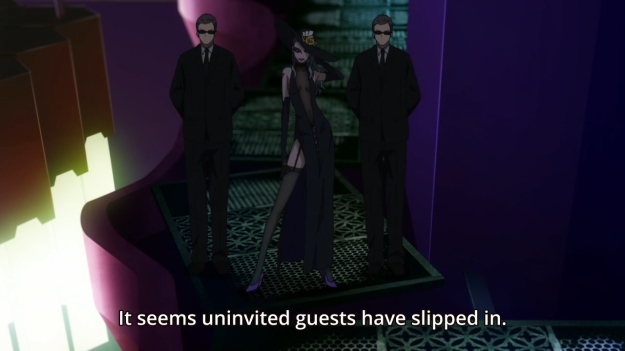 — Well, well, well, it’s Shadow Sae. But I feel as though the proportions are off. She looks way too elongated here.

— Ren is the only person who doesn’t look impressed by Akechi’s feats.

— For now, the team plays it safe and withdraws from the Palace. Besides, Ren and Futaba are about to face some trouble back in the real world.

— Once again, the adaptation changes the timing of these events. First, we seem to have skipped a portion of the cultural festival. There’s a fun scene where your girl of choice has to go on stage, but you end up “rescuing” her from tough spot. Anime Ren might have nothing but platonic friendships, but I still think they could have pulled this scene off.

— Then shortly after this scene, Sojiro confronts Ren and Futaba about the calling card. The team doesn’t decide to change Sae’s heart for about another week. Plus, in the game, Ren and Futaba return home to an angry Sojiro waiting for them. In the adaptation, the old man looks kinda silly chasing after his daughter. Akechi was also not present for this pivotal moment in the game. It’s not a big deal, but the changes are jarring enough for me to go, “Wait, that’s not how it went down…”

— Huh, Sojiro rips the calling card out of Ren’s hands and acts as if it has nothing to do with the hero. Odd. Anime Sojiro just seems less cool and less warm overall compared to the original.

— This results in the team convening on the school rooftop the next day to discuss what they should do next about Sojiro and Futaba. This is definitely very different now. I don’t know why they’re drawing this subplot out so much. In the game, you reveal everything to Sojiro and hash it out all in one night. 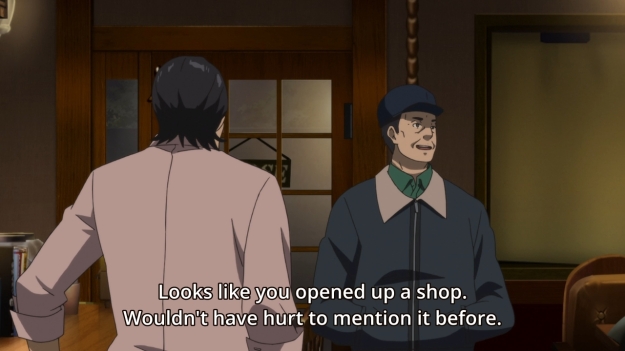 — Later at night, one of Futaba’s many terrible relatives drop by to stir up some trouble. I don’t know how the law works over there, but I’m not sure I understand why Sojiro would have to pay her uncle child support even though the man isn’t actually raising Futaba.

— As to who would win between a blood relative and a legal guardian, I assume the judge would ask the child who she wants to be with. The girl’s best interest is paramount, right? But again, I don’t know how it works over there. Still, if he wants to hash it out in court, go for it. Sojiro doesn’t look rich, but neither does this deadbeat uncle.

— Thanks to the drama in her life, Futaba can’t concentrate in Sae’s Palace. As a result, the team is stuck. Welp, that is why we’re drawing this out. They could just animate more scenes within the Palace, but I guess CloverWorks would rather not.

— Man, does he really just leave her food on the floor like that? Kinda makes you feel like she’s a prisoner. He can’t even walk into her room?

— Afterwards, Sojiro teaches Ren how to make Futaba’s mother’s curry. I’ve ranted and railed about Japanese curry enough, so I won’t comment on it any further. Just coffee in curry is… eh…

— I also tried Japanese curry with coffee once. It wasn’t great.

— Sojiro then goes on and on about how that bastard uncle did a terrible job caring for Futaba. She had to sleep on the floor and she wasn’t allowed to bathe. Now, why you would want some kid stinking up your joint, I’d never know. But that’s besides the point. Outta nowhere, Sojiro starts wondering what’s truly best for Futaba. I mean, sure, he’s not the best guardian, and he barely got her any help when she decided to become a shut-in. You could argue that he enabled Futaba. Nevertheless, he just got done describing how she was treated like an animal by her uncle. Why is Sojiro wavering now? I’m sorry, but is he stupid? Did he eat one too many curries with his coffee?

— Anyways, the solution to our problem is to change the uncle’s heart. Since Akechi is currently on the team, he gets to help out. He even opens up about about his mother and how she was abandoned by his father. I can’t actually remember when this conversation takes place in the game. I think it happens much later…

— Language, kitty! And don’t insult some poor woman just because her son sucks!

— Hm, I don’t remember Futaba’s uncle being a victim of the yakuza. In the game, he’s just a jealous gambling addict. You can watch the Youtube video for additional details.

— Also, you can’t just trip and sue someone. You can sue for damages, but what damages? Ren has two witnesses on his side, and even if the judge somehow doesn’t believe Akechi’s word (despite him being a genius detective), Futaba’s uncle would still need to show that he suffered enough to warrant compensation.

— So investigators drop by to talk to Sojiro about Futaba. The situation is finally urgent enough for Futaba to step in and intervene on her guardian’s behalf. After convincing the investigators that she’s fine, Sojiro finally gets around to asking her about the calling card. Essentially, the adaptation combined this scene with his social link. Oddly enough, Futaba’s own social link deals with an entirely different issue…

— In the adaptation, Sojiro kinda rolls with it. He doesn’t get angry with the two kids. I prefer how the game handled it. Also, in the adaptation, Futaba’s uncle just gives up. The team doesn’t have to go into Mementos and change his heart at all.

— Afterwards, Ren loses to Akechi again in chess, but he swears he’ll win the next one. Basically, he’ll win when it truly counts. Nevertheless, the post credits scene reminds us that someone will soon betray him. I mean, it’s kinda obvious who it is at this point…

— The team find themselves back in Sae’s Palace, and this time, they can advance because Futaba is back to normal. In the game, you just go into a backroom and rig the game so that you always win. The adaptation decided to take a different approach. Oh well.

— The anime has been focusing mostly on his teammates, but I wonder if it’ll bother to give any resolution to Kawakami’s story. She’s got a bit a controversial one. Maybe they won’t even touch it.

4 thoughts on “Persona 5 The Animation Ep. 24: Don’t bet against the house”