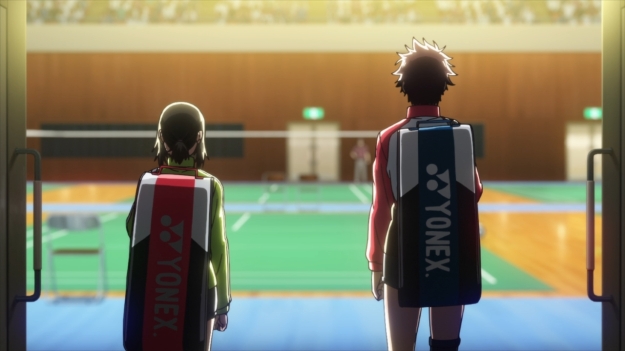 Look, I just want to hear Uchika’s excuse for abandoning Ayano. Whatever it is, I’m sure it’s going to be hilarious.

— I don’t know why Ayano’s grandparents aren’t addressing the elephant in the room. Of course she and her mother aren’t on speaking terms! Why aren’t you guys mad for her? Why aren’t you guys getting on Uchika’s case for having the gall to show up out of nowhere and act like everything’s okay. “Durr, there’s cake for dessert.” Who gives a shit about cake when you’ve been such a bad mother?

— Hah, Uchika just pretends as though Ayano is focused on her match. C’mon, gimme a break.

— The woman proceeds to sit outside her daughter’s room and say nothing of substance. Nothing at all. “Back then you played badminton for me, but now you can play for yourself. That’s why I came back!” Whaaaat? Am I in cuckoo land or something?

— And then the scene ends! It just ends! That’s all we get?! That’s the best explanation we get?!

— Ayano randomly likes to flash her horror face every now and then. It scares the other girls, but it’s just so hilarious dumb to me. What the hell am I even watching? I thought I would get to watch a show about badminton and somewhat realistic drama. But this… this is truly something else.

— The boys show up to practice even though they should be studying for their entrance exams. Like with everything in life, Isehara already has everything taken care of. Meanwhile, it sounds like Hayama is not too smart. 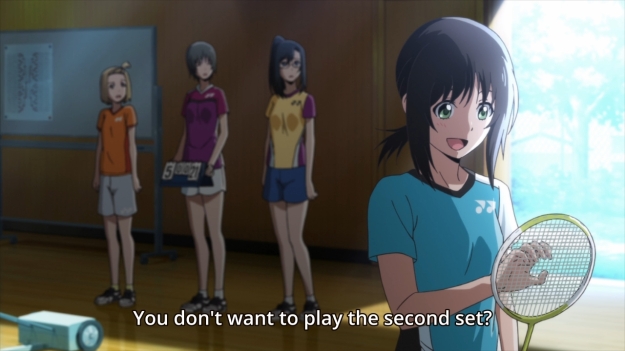 — Ayano ends up challenging Hayama to a practice match and beats him easily. I guess the differences between the sexes won’t show up at this level.

— This just free advertising. Everyone knows they’re referring to Pocari Sweat, so the studio is doing all the work and getting nothing out of it. So at this point, why even bother making the bottle look so accurate?

— We proceed to get a montage of the two girls training hard in the gym while an insert song plays. Exciting.

— Ayano continues to talk trash at every given opportunity. Nobody’s going to tell her to stop, though. That’s the craziest thing. Every once in a while, we become brats. It just happens. After all, no one’s perfect. We’re prone to acting up once in a while. But when we do so, our loved ones correct us. Our loved ones gently remind us that being a brat is not so nice. Unfortunately for Ayano, she has been running her mouth for episodes now and nobody seems to care! They just stay silent! What is with these characters!

— Later, Nagisa runs into Riko and her siblings. You got this one kid who just screams boobs. What a winner. Anyways, it sounds like Nagisa has something to say to Riko, but she suddenly gets up and keeps jogging. Yeah, yeah, communication is not these characters’ strong point. I kinda figured. 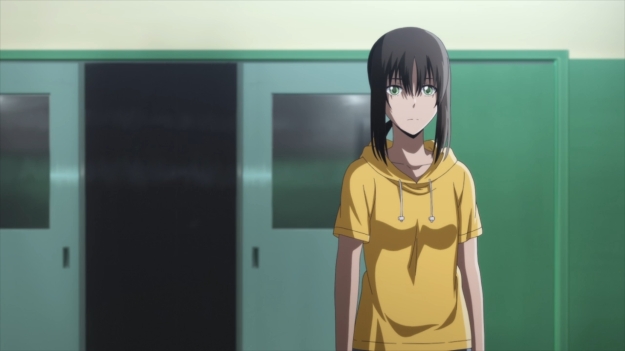 — Ayano is looking more and more like her mother with each passing day.

— Uchika shows up to the gym, answers one question about why she keeps playing badminton, and then… and then that’s it. Once again, the story leaves me scratching my head. I mean, try to fill in the gaps. What do you think happened afterwards? If we assume that neither Ayano nor her mother had anything meaningful to say offscreen, then we can only assume that they just went home awkwardly.

— Elsewhere, Nagisa is unable to sleep, so she rewatches Ayano’s match against Kaoruko. Well, you gotta scout out your opponent.

— When she wakes up, her TV is still turned on. That’s one way to get screen burn. Also, Ayano always looks psychotic these days.

— Oh boy, let’s zoom in on that psychotic face!

— Nagisa puts on a knee brace for the upcoming match, but I still think she shouldn’t risk her career for a meaningless match. Of course, it’s meaningful to her, but should it be? Like I said previously, it’s one thing to mentally give up (and even then, this can be debated). But if you have actual physical ailments, c’mon… the body can only take so much punishment.

— Elsewhere, Kentaro sings Nagisa’s praises. More specifically, he’s proud of how mentally tough she’s become. I mean, she kinda had to. Ayano is being a bully every single day in practice, and nobody’s stopping her. Not even the adults.

— I dunno, man, maybe Kentarou is much better in the manga or something, but I find it really hard to respect this guy. It just doesn’t look like he does anything. 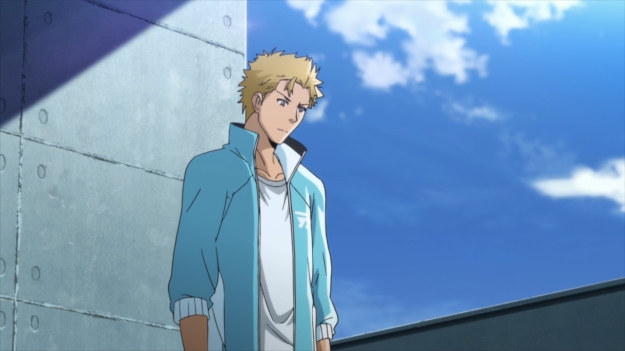 — When Miyako asks him about Ayano, his response is telling. He talks about her natural gift for the game, which tells me he hasn’t done a damn thing to coach her.

— So what did we learn? Both girls work hard. Great.

— On the practice courts, Ayano shoots Yu down. Meanwhile, Nagisa cuts her session short because she doesn’t want to let her future opponent see too much of her game. It sounds to me like she’s going to rely on some cheese tactics. We call them cheese because they typically only work once. Basically, Nagisa is acknowledging that Ayano would likely win, but if she can score some cheap points… well, you never know. The statheads will tell you that momentum doesn’t really exist in sports, but to a laypeople like you or me, we can’t help but feel more confident when the winds of fate seem to be blowing in our favor.

— And I’m just joking, by the way. No one should get hit. But c’mon, someone say something! Stop letting Ayano run her mouth!

— But even then, their conversation is so tame. Elena’s just like, “Why are you being this way? Are you having fun like this?” She’s not harsh at all.

— So Ayano reveals to her best friend that her mother has come home. Not only that, she claims that her mother abandoned her to make her better. Even though I think Uchika’s a bad mother, I think Ayano is misinterpreting her words. 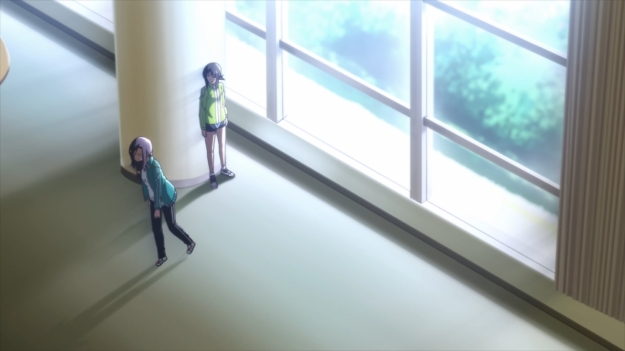 — Nevertheless, she sticks to the idea that she can now abandon her mother the same way she was abandoned. During this whole scene, those horror-esque violins are screeching in the background. This is great. Top-notch drama.

— As Elena’s leaving with her head down, Uchika dramatically walks past her. I don’t even know anymore.

— Elsewhere, Nagisa tells Riko that she’s gonna win, so I’m like, “Yeah, you go, girl!” Look, if she’s gonna risk injuring her knee even further, she may as well go all out. But then she turns around and goes, “I’m going to defeat myself.” I couldn’t help but laugh. Then immediately after she says that, she leaves without waiting for Riko’s response. Likewise, Riko just stands there with her mouth agape. These interactions, these conversations… people don’t act like this in real life, do they? At least I don’t think so!

— Almost everyone’s in attendance! Kaoruko, Nozomi, and of course, Uchika. Connie is probably the only important face that’s missing. Considering how she wants to have a family with the Hanesakis so badly, you’d think she’d be here to watch her “big sister” play.

— The match finally begins, and it looks like Nagisa’s strategy is to throw Ayano off by playing long rallies. Instead of smashes, she’ll mix in cut and drop shots. She wants to make her opponent overthink and thus play slower. Nagisa wants to dictate the rallies. That’s all fine and dandy, but will she have the stamina to keep this up? 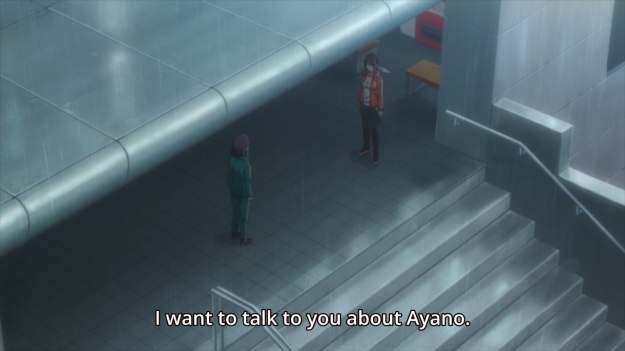 — After just two points, Elena notices Uchika leaving the gym. The girl then chases after the woman, because she wants to talk about Ayano.  Still, it looks like we won’t get any answers until the final episode.

— Meanwhile, Nagisa reminds herself that she had the element of surprise on her side. The rest of the match won’t be so easy.

— All Ayano does is give her opponent that crazy, tweaked out look. Ah well, at least the this adaptation is wrapping up. If there’s a sequel, I don’t know if I want Liden Films to handle it. They have serious animating chops, so I can’t fault them there. They’ve managed to make badminton look damn good. Hell, even when the characters aren’t playing badminton, the show is a pleasant on the eyes. On the other hand, this sort of storytelling is goddamn tiring. It was amusing after five or six episodes, but I’m over it by now.