Man, it’s going to take three whole episodes just to wrap up this final between Ayano and Nagisa.

— Right at the start of the episode, we get yet another flashback that paints Uchika in a horrible light. She coldly left Ayano even though the little girl pleaded for her mother. Look, if the show is gonna turn around and tell us that Uchika had her reasons, it’ll be laughable.

— At this point, I don’t really have anyone to root for. Ayano is being a huge brat like always, so she doesn’t deserve to win. But honestly, Nagisa never endeared herself to me either. I’m also still annoyed that she insisted on playing this meaningless match.

— Out of nowhere, Ayano hits a cut smash that curves away from Nagisa’s racket. Since I’m told that this show is realistic about the sport and how it works, I have no reason to think that this isn’t possible. So if Nagisa is going to try to win with guile, then I guess Ayano is going to have to be even sneakier. It’s not like anyone expects her to smash as hard as her opponent.

— After the OP, Elena asks Uchika the question we’ve all been wanting to know since the series started. Here it comes, guys!

— Uchika starts off by saying that her daughter started playing badminton for her sake. I suspect that her explanation isn’t over yet, so I’ll hold off on any commentary until then.

— In any case, we return to the gym where Kaoruko explains that Ayano being a lefty allows her to curve her shots. Okay then. Y’know, lefties have advantages in practically every sport, it seems. 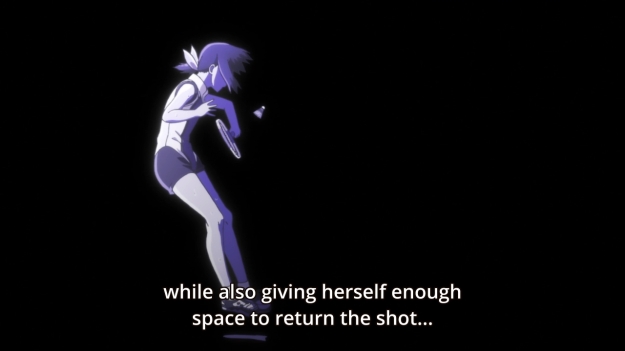 — Ayano continues to unveil more and more cool moves in her repertoire. So is she gonna win this match easily or not? I suspect not since we still have another episode to go. So the question is, how is Nagisa going to turn this around?

— Back in the gym, Ayano takes the first game 21-16, so this means she’ll lose the second. It has to be close. This is the final match, after all. Not only that, it’s the match that will send off the rest of this adaptation. Most of all, I doubt we’ll get a sequel.

— During a break, we find Sora and Yu in Ayano’s corner. Naturally, Nagisa has Riko to support her. Do Sora and Yu really want to be by Ayano’s side, though? I guess that’s the million dollar question running through Ayano’s mind. We can see the big picture, so we know that her teammates will always be there for her. They stuck with her even when she was being a huge jerk to everyone, so they’re in it for a the long haul.

— More importantly, for all of its drama, Hanebado! is still going to preach to the choir, which is that teamwork and nakama are everything. That’s just how these anime stories work. But from the ground level, I suppose it can be hard for Ayano to see through the miasma of negative feelings to understand that she’s still being loved despite her foul mood. That unlike her mother, not everyone’s going to abandon her at the drop of a hat.

— Elena and Uchika continue their conversation, and the latter states that she has no regrets. Why? Because she believes that her daughter is about to have a major breakthrough in badminton. Y’know, the only potential silver lining for Uchika was if she had ditched Ayano to prevent the girl from losing herself in badminton. But apparently, this was the goal all along! She’s one of those psycho parents who would rather trade her daughter’s love for her daughter’s success! Let’s just hope all those trophies make up for years and years of therapy that Ayano will most assuredly require once this is all said and done.

— According to Kaoruko, our resident commentator, Nagisa now has the power and stamina of a male player. As a result, Ayano’s old bag of tricks can’t wear her opponent down like it used to. The girl’s been forced out of her comfort zone, and she’s also faltering a bit under pressure. She’s playing not only to win, but to prove that she can abandon her mother. Well, it’s probably not beneficial to play with a heavy heart. You might think that it drives you to win, but it’s really just another distraction on the court.

— Now it’s Ayano’s turned to be exhausted, and as a result, Nagisa will now start hitting smashes. After wasting so much energy playing out of her comfort zone for a game and a half, Ayano is suddenly unable to keep up with her opponent’s smashes. Nagisa smartly prevented Ayano from watching her practices for this very reason. Even if Ayano is the more talented player, a good gameplan on “any given Sunday” — to use a phrase from American football — means that an upset is always around the corner. Nagisa is probably playing the match of her life. As for Ayano, eh… who can say? 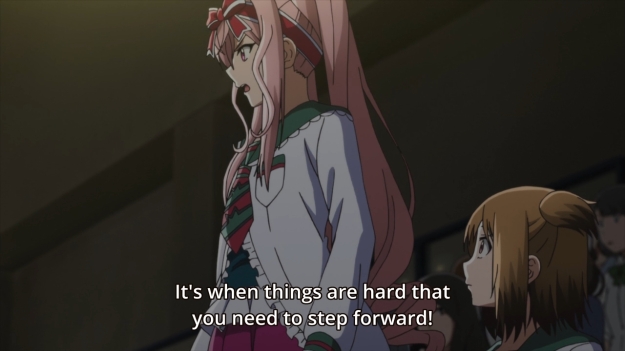 — But oddly enough, it’s Kaoruko who starts cheering for the girl. I guess your bitter rivals can be your biggest fans.

— In the end, however, Nagisa levels the match by taking the second game. Whether or not momentum can be a quantifiable thing in sports (most studies say no), Nagisa’s confidence is nevertheless sky-high. Meanwhile, Ayano continues to distrust Sora and Yu, believing that the girls are only in her corner because they have to be. That in the end, they’re truly rooting for Nagisa to win. Again, I guess it’s hard not to feel that way after being abandoned by your own mother. So Ayano does what most vulnerable people do: she pre-emptively pushes them away so that they can’t hurt her first.

— Kentarou checks up on Nagisa’s knee, but the girl insists that she’s fine.

— Elena and Uchika have returned to the gym, so I guess that conversation is done and over with.

— At the start of the third game, Ayano looks as though she’s mentally crumbled under her own self-inflicted pressure. Even though she had wanted to abandon her mother by winning this match, she is really just afraid of being abandoned again. When you win, you get to decide who stays in your circle. Ayano wants that privilege. On the other hand, when you lose, people have to choose to comfort you. Well, when your own mother decides not to comfort you, it’s not hard to conclude that maybe no one else will.

— In any case, all this negativity allows Nagisa to race out to an 8-love lead.

— When Ayano goes to swap out her racket, Sora tells her not to throw the game. She and Yu then pretty much insist they’re still a team no matter how much Ayano pushes them away. Since they wanted to play at nationals but can’t, they’re behind Ayano 100%. Everyone in the gym then starts cheering her own like some sort of magical moment straight out of a schmaltzy movie.

— Ayano takes a moment to gather herself and wipe away her tears, then the match resumes. In the next point, it looks like she misses a shot again. But that’s not the remarkable part. For some reason, Ayano is now holding her racket right-handed. Huh? Was she a switch-hitter all along? Or is she just messing around again?

— So what will happen in the final episode? Well, we can only guess, but in all likelihood, Ayano will probably lose. What are the lessons to be learned? Have fun playing badminton, your team is always there for you, winning isn’t everything. Yep, all signs point to her losing and Nagisa finally getting her moment of glory even if it’s only the Inter-High qualifiers. The only question is how both Hanesaki women will react to this outcome. Ayano is somewhat easy to predict, but Uchika is a little harder to read. As sad as it sounds, I don’t expect her to stick around in Japan.

— As one final addendum to this overly long post, there’s a paradoxical allure to a brash, cocky athlete who can talk trash and still back it up. But when they lose, boy is it embarrassing. Since I’m certain Ayano will lose this admittedly pointless match against Nagisa, all her bratty behavior from previous weeks is going to be absolutely shameful.