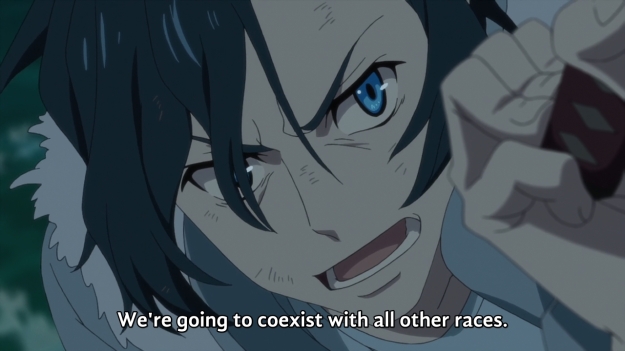 — This oafish vampire just kinda dies right at the start of the episode. We don’t even get a big, fancy fight between him and the rest of the Jaegers. Man, that’s lame. At least give them some spotlight.

— Somehow, Yuliy manages to chase down an airship. I guess it must have slowed down a lot just to let our hero catch up. Willard then helps out by taking out the pilots.

— This is pretty ironic coming from Ryoko. Dorothea then teases her, which bugs me a little. She’s essentially teasing the audience about the romance, but you get the feeling that nothing will ever happen between Ryoko and Yuliy.

— Now that Yevgraf has absorbed the Ark, he no longer gives a damn about the vampire affliction. Welp, so much for his own kind. Actually, he doesn’t even consider himself one of them anymore.

— As a result, the vampire loli is crestfallen. Yevgraf then wants to form a pact with her, which may or may not work. She’s scared that she might die. This is a bit of an odd turn for her character, because it was nonexistent up until this point. I just regarded her as yet another evil character to die, but all of a sudden, it seems as though the story wants me to pity her. But why her and not her sister who just kinda died unceremoniously? Hell, it didn’t even seem as though she was all too concerned that her sister passed away (if the other vampire loli was even her sister). 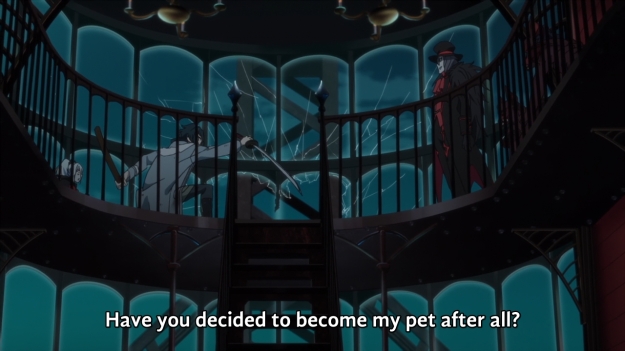 — Good ol’ Yuliy shows up in time just to save the girl. And now, we have pointless chatter between our hero and Yevgraf before the final boss fight can occur. I mean, he has important information to reveal, but I have no clue what I’m supposed to do with said information at the 11th hour. Okay, so the Ark was given to the Sirius by a certain being 5000 years ago, and the werewolves never used it once. They didn’t dare to. Who or what is this “being,” though? Aliens? God? But that’s the thing: it’s the last episode. What’s the point of even speculating about this anymore?

— Yevgraf now wants to wipe out the current race of vampires and create a new one. How he intends to do this is unclear, but I guess we just have to assume that the Ark is omnipotent and can thus conjure up races out of thin air?

— But unfortunately for the vampire lord, his body is now mutating horribly. He looks more like one of Klarwein’s creations than an ascended being.

— Willard only now conveniently shows up to inform us that Yevgraf’s body can’t handle the Ark’s power. Well, of course…

— While Mikhail tries to fight Yevgraf one-on-one, Yuliy gives a stirring speech about how everyone should live happily together. Everyone including vampires. This catches the vampire loli’s attention, so… so what? Is she going to follow Yuliy now? Is that how it’s going to work?

— I do kinda understand where the peace thing comes from. Even though it’s all but certain that Mikhail is going to die, this is the only way that Yuliy can reconcile the differences between him and his brother. My brother is a vampire now, but I don’t love him any less. Likewise, I shouldn’t hate the vampires. I should try to love them as well.

— So Willard whips out the counterpart to the Ark. This thing will then allow an individual to thus control the Ark. Like I said in previous weeks, this just feels unsatisfying. It wasn’t earned or anything. When it came time for the series to come to a close, the Professor just knew where to go to find this MacGuffin to counter the other MacGuffin.

— The vampire loli doesn’t understand why Yuliy would want to spare her, but Willard claims that with the Ark, worldwide peace may very well be possible. That’s nuts, though. If the Ark is truly capable of that, then why did the Sirius just sit on it for thousands of years? Why did some kid just stumble upon the realization that he can use the Ark to such great effect? This smells to me like a writer just wanting to wrap things up in a neat, little package.

— This is not a very tense final battle. Yevgraf lost before the fight even began. I thought we would at least get a taste of what the Ark is capable of, but since his body can’t handle its power, it’s literally falling apart right before our eyes. For the story’s climax, this is very much unhype.

— Mikhail kinda sacrifices himself in order to pull the Ark out of Yevgraf. As a result, we get to see the latter’s ashy butt disintegrate. Yep…

— Nothing noble about this death.

— In the end, Yuliy didn’t even use the MacGuffin that he had gotten from Willard. It’s kind of a “Okay, you’ll need this once you get the Ark back” sort of deal. That’s… ugh.

— So now that he’s accomplished what he set out to accomplish, Mikhail can peacefully pass on.

— Afterwards, we see the two MacGuffins merging so we know Yuliy has truly inherited his race’s legacy. He then goes to see Willard one last time before departing on his grand but ultimately lonely adventure to unite the races. But of course, if he ever strays from his noble goal, he wants his surrogate father to be the one to put him down. Sounds difficult, though. The Jaegers are not magical werewolves with super speed and strength like Yuliy and Mikhail. Even if Yevgraf was ultimately weakened by the Ark, Mikhail couldn’t take the guy down alone. He needed his little brother’s help. I have a hard time seeing a bunch of humans take down Yuliy if he ever goes nuts.

— When the Professor wakes up, he finds himself in a hospital room with all of the side characters. It kinda bugs me that Yuliy didn’t bother to say his goodbyes to anyone else. Not Ryoko and Hideomi, but the rest of the Jaegers were his family for years too, weren’t they?

— Anyways, our hero is now perpetually on the lam, because everyone wants him. Everyone wants to get their hands on him and his precious Ark-y powers. Governments want him for their own uses. Headquarters want him, because they probably don’t trust him. Y’know how the saying goes: no one man should have all that power.

— Ironically, the only person who isn’t actively pursuing Yuliy is Ryoko. Oh, she still wants him, but she’s going to do it in her own roundabout way. She admits that she’s been childish, so for now, she’s content to go to business school, learn to take over the family business, and become a better, more well-rounded person. Something something new perspectives so our lives will overlap. I mean, far be it for me to discourage a young girl from pursuing her education, but if she has faith that she’ll one day cross paths with Yuliy, that’s one hell of a pipe dream.

— The rest of the Jaegers are told to go after Yuliy as well. But of course, they don’t actually want to capture him. They just want to see their old friend. Awwwwww.

— So what is Yuliy up to at the moment? Well, like he told Yevgraf, he wants peace and love for everyone including vampires. This means going to see the rest of the vampires and having a little chat. We see Yuliy on a train with the surviving loli vampire. I forget her name, because she never really had much of a character arc. Then for some reason, it looks as though the loli vampire just disintegrates into ash. I’m not sure if she just died or what, but considering how she said she’ll be waiting forever for Yuliy, it would be weird for her to just die right there and then. Plus, when vampires die, they kinda burn up. I don’t see any orange sparks here, but I could be wrong.

— I dunno, this ending just doesn’t feel satisfying? It’s weird, because I never really connected with Yuliy as a character. Right from the get-go, he felt way too generic to really care about. Nevertheless, I still feel disappointed that despite everything he told his father, he’s effectively forced to isolate himself from the world for an indefinite amount of time. Sure, unlike his father, his goal is to ultimately unite the races. But let’s be honest: mankind sucks. Mankind will be at each other’s throats forever. Add in some murderous, elitist vampires, and Yuliy has a tall task ahead of him. Even though the story ends on an open-ended, hopeful note that our hero may very well accomplish his tall task one day thanks to the all-powerful Ark, I can also easily imagine him living for centuries without friends, families, or communal love because of who and what he is.

— It’s doubly disappointing that Ryoko was nutso all series long, barely did anything in the finale, then all of a sudden, she magically matures. Uhhhh…

— The show had pretty good animation and an okay soundtrack. When the vampires attacked the Naoe household, it even got pretty exciting. Unfortunately, the overall story is largely forgettable, and other than Ryoko’s inexplicable crush on Yuliy, the characters are equally unremarkable. I only rooted for the girl, because she was so reckless that I actually wanted her to succeed in her mad quest for werewolf love. Plus, there’s the fact that I like romance in general. It’s just too bad our hero never really cared about her. Hell, he barely knew she existed. All she could do in the final act was toss him a sword. Obviously, the guy always seems to have bigger fishes to fry. He goes from trying to avenge his village to saving his brother to finally attempting world peace. He never had nor will he ever have time for love.

1 thought on “Sirius the Jaeger Ep. 12 (Final): Peace and love for everyone”