It’s such a cliche, but it’s true: Kirill should just focus on being himself. Unfortunately, not only is he an overthinker, he’s not all that bright. That’s a dangerous combination.

— Kirill’s also a dreamer, so he lives in his own mind and tries too hard to be cool. Unfortunately, he doesn’t seem to have the work ethic to match his aspirations. It’s not that he actively tries not to learn. Rather, he gets so excited in the heat of the moment that he forgets himself. He forgets that that he should be taking a backseat and just learn. Basically, he’s the direct opposite of Kay. She’s eagerly asking questions whenever she can; she’s even taking notes. Kirill, on the other hand, immediately grabs the biggest, coolest gun he can get his hands on and proceeds to embarrass himself.

— Anyways, I imagine the majority of these early episodes will feature a case of the week for our heroes to tackle, but the details concerning them will be largely irrelevant. Instead, these cases will only serve to help us get to know these characters.

— Doug and Kirill are assigned to a relatively straightforward mission as a way to help the latter quickly get up to speed, so Pink sees an opportunity to pawn Kay off on them. She doesn’t seem like she would have much patience with a newbie. It could be worse, though. She could’ve gotten Kirill assigned to her instead. At least the new girl seems both competent and low maintenance. On the other hand, Doug is probably the only vet here who wouldn’t lose his patience with Kirill.

— Y’know, after watching Saori Hayami play Yuzuki in A Place Further Than the Universe and Kokoro in Darling in the Franxx, hearing her as Pink is a nice change of pace. We still don’t know too much about Pink as a character, but I’m sure she’ll get her time in the spotlight.

— Doug is going over the case in the car, and of course, Kay is taking notes. Meanwhile, Kirill is busy daydreaming. I feel like this kid went into the wrong line of work. Don’t get me wrong, though. I don’t dislike him. I actually enjoy the show and his antics. More importantly, I do hope he proves himself eventually. It’s just funny, because he’d probably be fired by now in the real world.

— Kay manages to polishes off a box of donuts all by herself. Man, that’s a woman after my own heart.

— Kirill wants to storm into the factory with guns ablazing, but instead, the trio are going undercover as reporters. He’s like a little kid trapped in an adult’s body.

— And like a kid, he wears his heart on his sleeve. When he hears the striking union’s sob story, he practically forgets all about the case and starts stumping for the workers. Seize the means of production and all that.

— Anyways, the gang don’t find any evidence of wrongdoing, so they should take a break for the day. Should. It’s just the first day, after all. The ever-impatient Kirill, however, tries to stake out the factory. When he sees a bunch of trucks roll by, he thinks his detective’s intuition may have just paid off. Unfortunately, this ends up being a false alarm. Intuition comes with experience, which Kirill doesn’t have. It’s just a matter of the time, but the kid always jumps the gun.

— Of course, Kirill can’t help but feel as though he lives in Doug’s old partner’s shadow, but he put himself there. He only has himself to blame. It’s not like Doug is asking him to replace his old partner. 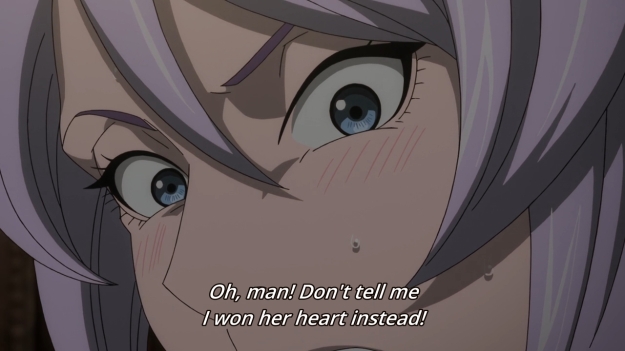 — Later that night, Kay ends up inviting Kirill out to eat, and the idiot mistakes this gesture for romance. It turns out she’s just a foodie, but she’s shy about going out to restaurants alone. Man, is this girl just the best or what?

— I don’t trust those pies, though. Are they supposed to be that green?

— Anyways, Doug eventually sniffs out the bad guys’ schemes. After all, he’s a longtime veteran, so you know he’s honed his detective’s intuition to the max.

— This isn’t a very serious show, so I really shouldn’t try to treat it like one. Nevertheless, I just want to point out that Kirill’s biggest mistake is his unwillingness to learn. He wants success so badly that he’s missing the point. This is supposed to be a training exercise. He’s not meant to have all the answers. He doesn’t need to be the one who “cracks the case.” Rather, Kirill just needs to sit back and watch Doug in action.

— On their way back from the restaurant, the two rookies end up running into the bad guy. Talk about bad luck.

— Well, we can’t spend all day shitting on Kirill. He’s gotta be good for something, right? Well, what’s good about the kid is that he’s foolishly courageous. He doesn’t have Doug’s intuition nor does he appear to have Kay’s sharp observation skills. But to his own great detriment, he will put himself in harm’s way in order to get the job done. When the factory foremen goes into Overdrive and is moving too quickly for Doug’ s eye system, his partner more or less sacrifices himself. This then allows the seasoned veteran to work his magic. Sometimes, you need someone to do the dirty work. Maybe that’s the role that he’s ultimately meant to fulfill.

— In the aftermath, Doug hands Kirill his own purple-themed gun. At least, I hope that’s a real gun. It sure does look like a toy. Still, the dimwitted Kirill is over the moon. He’s easy to please.

— Man, I really enjoy that ED.

— I’m still enjoying the show. I like the humor, and the characters seem fun and full of energy. Kirill’s an idiot, but at least his heart is in the right place. I just hope they continue to develop his character. Why is he so impulsive anyway? What is he so impatient for?