This is better as a love story than a mystery. I’ll explain at the end.

— Oh dear, the episode kicks off with the dreadfully overused Schrodinger’s cat thought experiment. Everyone wants to think they’re smart because they can understand it. Y’know, nevermind the fact that the experiment is supposed to illustrate the difficulties of applying quantum mechanics to the macro level, i.e. cat-sized objects. So far, the experiment has only been carried out by super tiny objects. Y’know, like ions. Maybe we can one day perform this thought experiment on a single-celled organism, but we’re far off from ever catching a cat in a superposed state.

— Apparently, when Mai picks up an object, it also ceases to exist to the rest of the world. So the guy proposes a very reasonable and harmless experiment: what happens to him if they hold hands? So what are the results? The carrot disappears, but Sakuta doesn’t. Does the story then try to explain this inconsistency? Nah.

— Later that night, Sakuta tries once more to convince Mai to go back into show business. She counters by telling him that he doesn’t know anything. He then goes on a spiel about how he knows her mother had forced her to do a photo shoot that showed off too much skin. Mai slaps Sakuta for saying too much, but she starts pouring her feelings out to him anyway. I guess brute forcing someone’s trauma is one way to do it.

— Still, I think it’s rather insensitive of him to force her to open up about this painful experience right there and then. He could’ve approached this in a much more delicate way. Maybe there’s a nasty side to his personality after all. He might be right, but that doesn’t mean he also isn’t an asshole. 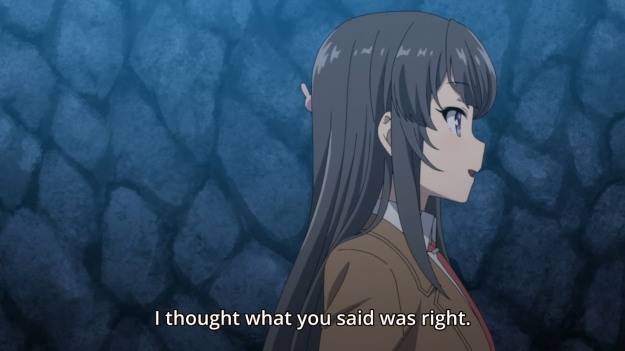 — Plus, this just continues the silly trend of anime characters playing armchair psychiatrists to their friends’ problems.

— Apparently, Sakuta got this information about Mai from that reporter at the end of last week’s episode. He had to make a deal too: he allowed the woman to take a photo of his scarred chest. Mai seems to think that the guy and his sister will now lose their privacy. I dunno, would this really be a hot topic? Does anyone honestly truly care about a kid and some scars on his chest? I wouldn’t give a shit. Then again, it was apparently big news in my country that some girl ate cereal with milk for the first time, so who knows?

— All I’m saying is that Mai’s reaction feels a little extreme, so I wonder if she was even worse with regards to her own privacy problems.

— Now it’s Mai’s turn to make a deal. In exchanging for not showing Sakuta’s scars on TV, the girl will give the report a big scoop: she will be returning to show business, but not with her mother’s agency. The reporter will then get an exclusive interview with Mai. So the guy managed to change her mind after all. That was quick… almost too quick. What’s the catch?

— Getting ahead of yourself there, buddy.

— On his way to meet Mai on a Sunday, Sakuta bumps into a lost child and tries to help her. This somehow gets him into trouble with some random girl whose name I do not yet know. After a bit of ass-kicking, he eventually makes his way to Mai. Uh, okay. That was random. I guess this sets up a subplot later down the line. Like other harem-like shows, I imagine our “hero” will be going from girl to girl, solving each of their problems with Adolescence Syndrome. Some (if not all) will fall in love with him, but in the end, we all know that Mai is the canon girl. This is pretty lame, but it’s also sadly par for the course. I want to say that I expect more from this writer, but I really don’t. So far, I’m only a fan of one of his works. 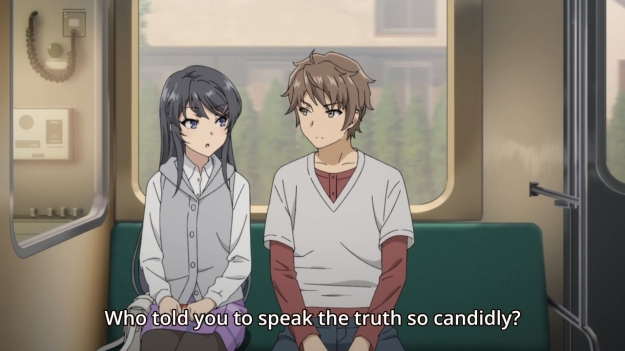 — I kinda enjoy the banter between Sakuta and Mai. Other girls might not be as interesting.

— It’s ridiculous how far these stories will go to remove parents from the picture. Sakuta’s mother couldn’t deal with everything that had happened to Kaede, so as a result, they all live apart. Right, right, she can just afford to pay for two separate apartments.

— Now we see Sakuta’s opening up about his first love: some girl who apparently never existed. Seems to me he just keeps bumping into weirdos. Nevertheless, he claims that she was the reason that he was able to cope with all the nonsense in his past.

— Anyways, Mai finally reveals why she dragged Sakuta all the way out here: she wants to confront her own mother before returning to show business. Unfortunately, her own mother no longer knows of her existence. There’s the catch. Mai’s problem can’t be solved that easily.

— We saw in last week’s episode that her mother was still able to message her. All that’s changed is that Mai is willing to return to show business, but not under her mother’s direction and influence. Was that not enough? Is it also not enough that she arranged for a meeting with her own mother? Is she not facing her problems head-on? Is she still somehow hiding herself from the world and thus triggering this syndrome?

— I like how Mai’s name isn’t just missing. Rather, it looks like it has been covered over with white-out or whatever — like there’s some supernatural force actively preventing her from existing. Well, maybe this would all make a whole lot more sense if we can just blame some evil entity.

— Later, Sakuta randomly quizzes people about Mai, but it seems like her non-existence is still spreading. Even the reporter who just made a deal with Mai no longer knows about her. Looks like Sakuta’s idea of returning to show business isn’t enough to fix the girl’s problems. We must go deeper! We must become even more obnoxious armchair psychiatrists (with a dash of quantum physics)!

— Mai wants to throw in the towel, but Sakuta convinces her to keep trying. He promises that even no one else knows of her, at least he’ll be by her side the rest of the way. What a romantic gesture. On the other hand, I’m going to be so disappointed if this is just foreshadowing for him forgetting about her too. It would be so cliche if he ends up spending the entirety of some later episode struggling to remember someone he’s forgotten. It would also be so cliche if he ends up realizing his error at the last second, then races against time to find Mai. But we’ll see.

— Oddly enough, his friends still know of Mai. Rio suggests that maybe there’s a link between the school and Mai’s tenuous existence. After all, her classmates haven’t forgotten about her. They just steer clear of her.

— Watching these two kids talk to each other in bed, it becomes apparent that I won’t get any enjoyment out of this show if I focus too much on the mystery aspect. Likewise, I won’t get any enjoyment if I focus too much on the dreaded Adolescence Syndrome and how it works. Rather, what’s kinda enjoyable here is the blossoming relationship between Sakuta and Mai. Their friendship is kinda sweet. This is why I think this show is better seen as a love story. On the other hand, the mystery that serves as the catalyst for bringing these two together feels almost gimmicky. At some point, they’re going to have to get to the root of Mai’s problems, but I almost wish the whole “non-existence” thing no longer, well, existed. This might have been better as a straightforward drama. The problem is that the first episode primed us to focus on the mystery, so now it feels odd to suddenly swerve and spend so much time talking about the characters’ feelings.

— Well, it’s not my favorite show of the early season, but I’m still interested.