Honestly, it was a pain to get through this week’s episode. It was so incredibly dull.

— The episode opens with an origin story about the gods rolling a pair of dice in order to decide who would rule what. They did this over and over until they fainted. Um, okay. Are the gods just the human players participating in this lousy campaign or what?

— I’ve never tried DnD, so that part doesn’t carry any nostalgic weight with me. Besides, my biggest problem with the show is that the people in it are dumb. I don’t see how that has anything to do with DnD unless your campaign specifically calls for brain-addled NPCs left and right.

— Even these characters are starting to look kinda samey. The girl on the left reminds me of one of the victims from the first episode.

— Anyways, the high elf has come in search of Orcbolg. Unfortunately, the Guild Lady has no clue who she’s talking about. A dwarf joins the conversation, but this is going nowhere fast. They’re probably referring to Goblin Slayer, but this is why we use proper names, you dorks. Proper names would clear up this confusion real fast.

— I guess we’re now introducing the rest of the party members fast and dirty, because now I’m staring at a lizard man. We’ve gotten three new faces in less than 30 seconds.

— And of course, as soon as his “name” is mentioned, our hero immediately shows up as if he had been summoned. 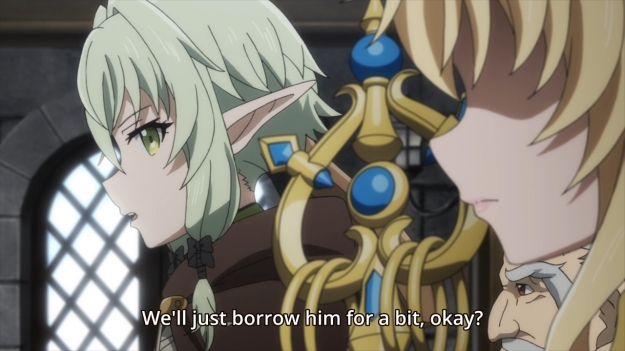 — For some reason, Goblin Slayer doesn’t think that Priestess should join him in a meeting with the three new characters. She should rest? Because a meeting is too tiring to deal with after fighting murderous, rapey goblins? Maybe he wants to protect her, but it’s hard to tell. He practically has no personality right now.

— On the other hand, she looks pretty bummed out over, well, a meeting.

— Yet another group full of newbies tries to recruit Priestess as soon as Goblin Slayer leaves. There’s a good chance that healers are in short supply. After all, people like to be warriors or fighters. Y’know, classes that can look heroic and do lots of damage. Being a healer probably isn’t everybody’s cup of tea. Not only do you depend on others to protect you, it seems that you can’t simply be a healer. You also have to embody the archetype of the role, i.e. being a pure, virginal maiden who speaks softly. That’s no fun for a lot of people. I guess what I’m saying is that I wouldn’t be surprised if adventurers like Priestess are in hot demand. Everyone wants heals, but no one actually wants to do the actual healing. Nevertheless, we know that these porcelain-ranked dudes can’t protect her, especially if they intend to go after goblins. We’ve already seen how weak these newbies are.

— More idiocy: “Silvers would usually go for bigger prey than [goblins].” Nothing new to see here. Like I said last week, these adventurers don’t seem to prioritize helping people.

— Plus, this is flawed model that requires a constant influx of newbies from god only knows where. After all, if everybody ranked up, then who would take care of the lower-ranked missions?

— A buxomy mage then tries her hand at persuading Priestess. Unfortunately, it seems as though she didn’t give herself enough intelligence at the character creation screen, because she… likes to talk… like… this. And because she speaks so slowly, this conversation is taking forever. Get to the point, man. 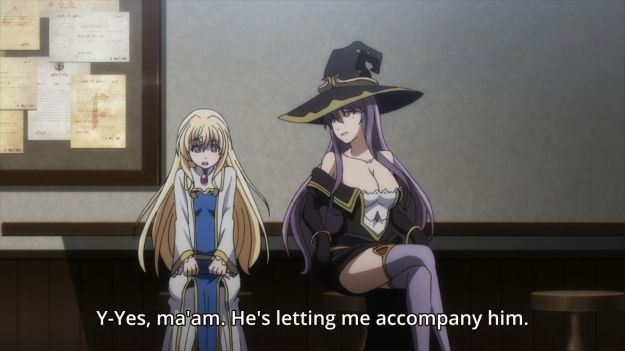 — Damn, Priestess keeps staring at this woman’s chest. When the conversation is this boring, gotta find something fun to look at, I suppose.

— The mage’s argument? Well, it only took her a billion years to lay it all out, but basically, there are a lot more baddies out there to worry about than just goblins. And if we only focus on goblins, then we might leave ourselves defenseless to other evil beings. Sure, she makes sense. But until society gets its collective head out of its collective ass, someone out there has to keep the goblin population in check. Unless, of course, nobody cares that peasant girls are being raped left and right. Y’know, that’s probably the case. The lower class might just be fodder. Kind of like a buffer between goblins and the upper class, y’know?

— As for Priestess, I don’t know why she has to “make up her own mind.” I thought she made up her own mind when she joined Goblin Slayer at the end of the first episode. He didn’t make her join him. She did so on her own accord, so why is this now suddenly a concern?

— The High Elf can’t believe that Goblin Slayer is actually silver-ranked, because he looks so weak. Uh, you don’t look so hot yourself, lady. None of them look particularly strong if we’re going by RPG standards. 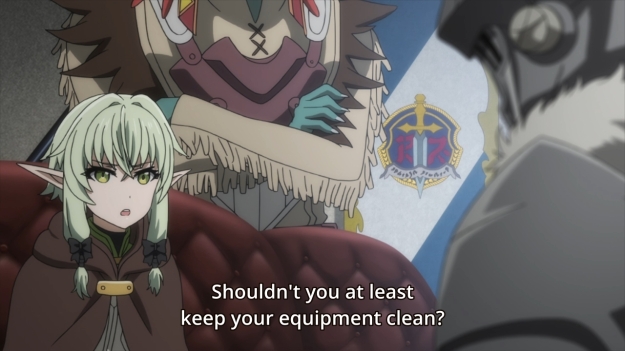 — What she doesn’t realize, of course, is that his equipment is specifically tailored to murder goblins. That’s all he cares about, after all. It’s like criticizing a bug exterminator for not wearing a suit of high-tech armor on the job. We’re killing bugs, lady. What do you think we’re doing?

— Oh, she’s one of those old souls in anime.

— High Elf proceeds to unload a generic fantasy RPG plot onto the hero, but the guy couldn’t care less. Y’see, Goblin Slayer isn’t actually a good person. He only manages to achieve good results as a byproduct of his actions. If High Elf is telling the truth, then an army of demons is a much bigger threat than goblins. Sure, goblins raid villages and rape peasant girls, but a demon army could wipe humanity out in its entirety. In desperate times, you gotta triage. Yeah, the villagers are defenseless, but there wouldn’t even be villages to protect once the demons are done doing their thing. Nevertheless, our hero doesn’t budge. Of course not. His only purpose in life is revenge. I understand that he’s all messed up in the head because he had to watch his sister get raped and murdered, but this still doesn’t change the fact that I don’t find him all that heroic. Sure, he saves people, but this is just a side effect of his main goal: murdering goblins.

— But it’s okay, because they still have a goblin-slaying mission for him.

— Apparently, goblins have gotten so strong in the elven territory that they can now rival platinum-ranked adventurers. Why wouldn’t you take them seriously at that point? This is so stupid. This universe is full of idiots. Yeah, sure, a single spider is nothing to freak out about. But if there’s a spider the size of my car, you bet your damn ass I would freak out about it.

— Goblin Slayer originally intends to go on this quest all by his lonesome. When asked about Priestess, he simply insists again that the girl needs to rest. Again, maybe he cares about her, but don’t expect him to give an elaborate explanation. The guy is about as interesting as a grey rock.

— In return, Priestess is bummed out that he still doesn’t see them as a team after all this time (three whole episodes). Still, she says that she’s coming along anyways, because she just can’t leave him alone! Why? Shrug.

— Later that day, we see the newly-formed party camp out under the stars. This is a classic RPG moment to sit and chat, so it’s time to get to know these schmucks a little better.

— We also learn that the lizard dude wants to become a dragon one day. I guess it’s one of those DnD ascendancy things.

— Goblin Slayer, of course, has little to say.

— High Elf is drunk after one sip of wine. Well, she probably weighs less than 100 lbs.

— This anime just went from goblins raping women to a party roasting cheese at a campfire. God, I know people said that the show would become relatively tame after the first episode, but this is just flat-out sleep-inducing.

— Can lizards even digest dairy products? In this universe, they can.

— And now we’re discussing the origin of goblins. Yawn.

— This leads to Goblin Slayer telling the party that he thinks goblins came from the green moon. Why? Because his sister had said so. Isn’t this just a children’s tale? Probably. But as we already know, the guy is very hung up on his dead sister. It’s a good thing he doesn’t need to be sane to be good at murdering goblins.

— In the morning, the party approaches a dungeon full of goblins while a metal track plays in the background. That’s probably the funniest thing I’ve seen all episode. So of course, here comes the credits.

— On the bright side, I guess dull is better than watching 15-year-old “adults” get raped. Let’s hope this continues to be boring as hell then.

3 thoughts on “Goblin Slayer Ep. 3: From trashy to just boring”