Kosuke, a former teammate, starts giving Kakeru a hard time in this week’s episode. I guess even when you become an adult, you can’t escape your high school troubles. Still, I just can’t help but wonder, “Shouldn’t college students have better things to do with their time?”

— So like always, we have disjointed flashbacks to help us piece together Kakeru’s “troubled” past. First, he was the star athlete back in high school, but this only served to isolate him from his teammates. Way to go, coach.

— Then… he got hooked on pachinko? Um, that’s… random. I blame Konami.

— And thanks to his gambling addiction, he had to resort to shoplifting. So, uh, what happened to his family? He couldn’t bum a few thousand yen off of them? And did he really have no friends outside of track and field? Did he really have no safety net to fall back on?

— A spaced-out Kakeru eventually bumps into the Prince and his manga-loving club, so they all invite our hero to lunch with them. Look at that spirited debate.

— Unfortunately, a bunch of athletes (soccer players) soon show up to the cafeteria and take over the nerds’ table. Uh, does that still happen? In college? I mean, growing up, I always felt like the whole nerds versus jocks thing was overblown. It certainly didn’t happen at my high school, and I definitely can’t imagine it happening at all at the college level. Sure, athletes get special treatment, but not like this.

— Elsewhere, Musa worries that he won’t have any money for club dues, but he’s still too much of a wimp to say anything to Haiji about his concerns. It’s like… yeah, I agree that Haiji is being too pushy. I agree that he’s kind of the villain in a story that has no true villains. Nevertheless, the gutless guys in the story like Musa aren’t doing themselves any favors. They don’t want to participate, but they don’t have nerve to stand up for themselves. It’s just pathetic. You’re a goddamn adult now. Grow a pair and communicate. Besides, I’m sure Haiji has already factored in Musa’s financial capabilities. He just seems like that kind of guy.

— After being treated nicely by the Prince, Kakeru suddenly starts to feel immensely guilty. So out of nowhere, he takes off running in the opposite direction. And as he runs, he’s being attacked by his own dark thoughts. Thank god we have a cute high school girl to snap him out of that little funk.

— After apologizing to Hanako, Kakeru mutters under his breath that all he can do is run. I guess he’s just like the other guys. He saw his coach bully his teammates, but he couldn’t stand up for them. But having said that, I still feel like we’re missing something. Something else must have happened to make Kakeru get triggered this badly from just bumping into Kosuke once.

— It must be a small world, because we just keep bumping into people. But just look at that cute dog. It even assumes a stance with Haiji!

— Still, there’s nothing too remarkable about this encounter. Haiji simply does the typical anime thing and reassures Kakeru that friends are the best! And more importantly, he ain’t never had a friend like him! Doot doot doot…

— We cut to the following morning, and again, the group assembles for their “routine” 10km jog. The Prince has pretty much stopped resisting. Haiji quickly tells the guys that Hanako is waiting for them, so they better get a move on.

— Lawyer guy must not be very observant, ’cause the twins have been on Haiji’s side for quite some time now.

— Man, even a butterfly is faster than the Prince.

— To his credit, Haiji is like the opposite of Kakeru’s previous coach. This guy will pull out all the stops in order to motivate his team. If this means he has to quote a line from the Prince’s favorite manga, so be it. Now, that’s some real dedication.

— Unsurprisingly, Kakeru is the first to reach Hanako. Her cheerful disposition embarrasses him a little, which is kinda silly. I keep forgetting that I’m watching a bunch of guys in college.

— Unfortunately, his former teammate shows up once more to taunt him. So… was Kosuke just standing here, waiting for Kakeru to eventually drop by? Again, doesn’t he have anything better to do? I dunno, man, I just feel like this is extremely immature and petty. Then again, some adults are really like that.

— When Kakeru doesn’t react kindly to Kosuke’s bullying — who would? — the latter goes, “You going to hit me again?” Welp, there you go. That must have the major catalyst that destroyed Kakeru’s high school life. But at the same time, this is all in the past, and Kosuke needs to move on. I just personally can’t imagine holding onto so much resentment that I now follow the guy around just to taunt him.

— Eventually, the rest of the guys show up, and this relieves a lot of the tension that had been building up been Kakeru and Kosuke. I like Haiji’s little trot just to maintain the same pace as the barely alive Prince.

— Hell, the Prince practically looks like a zombie here.

— Finally, Kosuke catches Haiji’s attention, so the two of them begin to chat. This culminates in the latter promising that their respective teams will meet at the upcoming track meet at the end of the month.

— Kosuke is incredulous. He can’t believe that this ragtag bunch is going to try and seriously compete at a track meet. After all, it took the Prince nearly 35 minutes to run 5km.

— But Haiji is serious. He’s dead serious. Plus, it’s not like they need to win the track meet or anything. They just need an official time to register for the marathon. Now, this really sets Kosuke off. He immediately turns to Kakeru and goes, “Hakone? Is he serious? Aren’t you embarrassed to run at their level?”

— Y’know, I just don’t get it. Why is any of this Kosuke’s business? Why does he even give a damn? Who cares? He’s got his own team now. He goes to a different school now. Literally who cares?

— Kakeru wants to say something, but he just can’t. He can’t articulate his feelings. All he can do is ball his fists up, so it looks like a fight might break out. It sounds like he has a pattern of bottling his emotions until it festers into violent anger. This is something he’ll really need to work on. 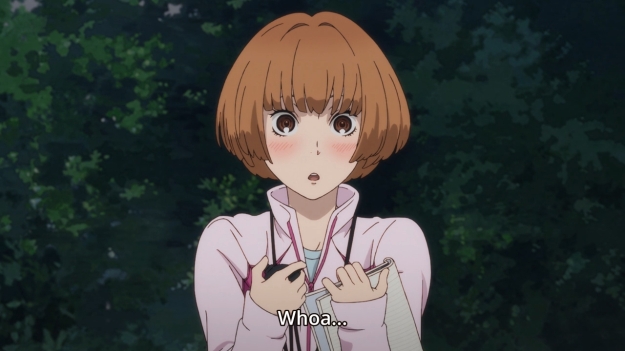 — At some point, the twins get up on their feet and try to be cool. But hey, what can I say? It looks like they managed to impressed the high school girl.

— Since nobody but Haiji seems to have the guts to say anything, it falls on the Prince’s shoulder to speak up. Yeah, the most physically unassuming guy there will have to stand up to the bully ’cause no one else will. Basically, the Prince is sick of people like Kosuke judging and looking down on others. Before he can finish his speech, he passes out on the grass. But that’s okay, because he’s managed to say enough.

— Haiji then promises Kosuke that Kakeru’s going to be faster than ever before, and with that, the bully just kinda jogs off without any fanfare. Hm, okay.

— For a long time now, Kakeru has felt like an outcast, but he probably feels as though he’s finally found a group that can embrace him without any judgment. He stares wistfully at everyone walking off together before finally running to join them.

— Well, I dunno, I wasn’t too impressed by this week’s episode. If you’re going to dig up drama from the past, it needs to be a little more compelling. Kosuke shouldn’t have just been an annoying, one-dimensional bully.