When it comes right down to it, Philip just can’t betray her creepy father, but can you blame her? It’s kinda hard to argue against a ghost. Yo, we need an exorcist over here!

— Apparently, this series has so much backstory that the adaptation can’t cover everything. As a result, we only hear about the Duke of Burgundy’s death in the opening narration.

— I think it would’ve been novel if the entire show had this art direction all the way through, but of course, we need our maidens to have giant breasts.

— Anyways, we pick up where we last left off. Bear Dude identifies himself as Girard, and he still aims to carve the philosopher’s stone out of Jeanne’s body. Meanwhile, Montmorency is stuck having a friendly chat with La Tremoille, his step-brother.

— It’s pretty obvious that La Hire is going to have to get our heroes out of this mess. Normally, you can’t really depend on mercenaries and sellswords, and La Tremoille even tries to pay them off. Unfortunately for him, La Hire’s gang is not too happy to hear that Jeanne and Montmorency have been captured.

— Luckily for our heroes, La Hire will have plenty of time to spring into action, because Girard’s not going to carve Jeanne up right away. Instead, he’s kicking her around like a ragdoll, because he still needs more information from her. Y’see, he’s not a complete idiot; he knows that he can’t do anything with the philosopher’s stone by itself. But therein lies the problem: even if Jeanne tells him about Montmorency’s elixir, what can he do with this knowledge? Capture the guy and kiss him every single time he wants to become a Ulysses? Yeah, I can’t see that happening.

— Speaking of Montmorency, La Tremoille also wastes a whole bunch of time time by telling his step-brother all about their dastardly plans. Basically, they’ll hand a good chunk of France over to England, and Philip is being used as a mediator for the so-called peace talks. Bad guys just can’t help themselves. They always get too chatty when they should just kill the heroes right off the bat.

— Montmorency wants to believe in Charlotte, but everyone tells him that this is pointless. Apparently, the girl lost her mind because she had to see so much bloodshed.

— As a result, the main character just blames himself, because he wasn’t there for any of his friends over the past seven years. I mean, I dunno, wasn’t some weird magic at fault? Before he knew it, seven years had just passed him by. I’m still not really sure what really happened. I mean, if he was that obsessed with making the elixir, when did he stop to eat and sleep? When did he stop to do his business? How did he have enough money to keep himself alive for seven years? I dunno, that whole section of the story is kinda trash.

— Still, Montmorency beats himself up over failing to fulfill that promise he had made with his friends seven years ago, and this somehow convinces Richemont that the guy is being earnest. She kinda just forgives him right there and then.

— Elsewhere, we see someone arrive to save Astaroth. It’s probably La Hire.

— Finally, La Tremoille makes his move to execute Montmorency and Richemont, but because he wasted so much time blabbering about nonsense, La Hire and the mercenaries are here to save the day. Way to go, bad guy.

— As for Girard, I guess he’s kinda stuck. He could carve the philosopher’s stone out of Jeanne’s body, but it would do him no good. So he goes and licks Jeanne’s blood? Um, okay…

— After crying uselessly for half an episode, Charlotte finally screams for help, and as a result, the good guys barge into the room. Too bad Girard has his knife at Jeanne’s throat.

— Montmorency thus tries to bargain for Jeanne’s life by holding up the other half of the stone. He’ll even go so far as to coat it with his own saliva, which pleases Girard. When the main character tosses the stone over to the bad guy, I thought that this would’ve been the golden opportunity to shoot the guy. Look, he’s distracted and the knife is nowhere near Jeanne’s throat! But apparently, this isn’t needed.

— Why? Because we’re then told that the elixir evaporates instantly when it is exposed to air. As a result, Girard ends up swallowing the stone without the elixir at all, and his body quickly goes boom. Man, I feel sorry for the servants that will have clean up this bloody mess.

— And just like that, the old Charlotte is back thanks to Jeanne. The girl’s selflessness convinced the princess that there’s still hope in this world. Haha, whatever. Both she and Richemont spent all of last week’s episode whining on and on about their issues, but they sure did get over themselves real quick.

— Alright, the threat is over. Time to tie up the loose ends.

— La Hire and the mercenaries are paid handsomely for their heroics, so they’re obviously sticking around. It sounds like France is in need of manpower for their army anyways. 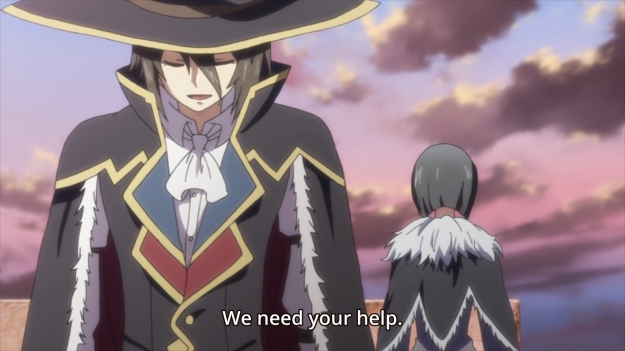 — Meanwhile, Montmorency tries to work his magic on Philip. Basically, France needs to unite in order to push England back and achieve peace. Also, don’t forget our promise!

— Unfortunately, as soon as Montmorency leaves, the dead ghost of Philip’s father admonishes her for even considering siding with Charlotte. Basically, the jerk wants Burgundy to become a powerful country, and even though he’s now dead, he expects Philip to carry out his ambitions. Well, like I said, it’s hard to ignore a ghost. Philip could try to stand up to her father, but then he would probably mess with her for the rest of her life. She’d probably go nuts if she isn’t already kinda messed up in the head.

— And if you think about it, Philip probably didn’t have a very happy childhood. I bet you she’s been abused aplenty.

— But enough about the ghost, so let’s get back to some harem hijinks. Basically, Montmorency is a weakling who can’t fight off a little girl. Whenever Jeanne wants his precious juices, she just forces herself upon him. This time, she embarrasses him in front of Charlotte and Richemont.

— So what is he going to do with the other half of the philosopher’s stone? Charlotte volunteers herself, and although Richemont tries to be all tsundere, her own intentions are obvious.

— For some reason, however, Jeanne absolutely refuses to share Montmorency with the rest of his harem. What? Does she have feelings for him? Eh, probably.

— Unfortunately for both of his childhood friends, Montmorency only gave half of the stone to Jeanne in order to save her. He has no desire to subject his dear friends to the same fate.

— I still suspect that he’s going to use the other half on himself at some point (maybe to save Jeanne), because it would be kinda weird if the guy stays useless for the rest of the series. But hey, maybe his job is to just stand in the back and provide the brains to Jeanne’s brawn.

— Wait, as long as Philip makes up his mind?

— Speaking of which, Philip eventually shows up to deliver the bad news: she won’t be teaming up with Charlotte.

— Montmorency makes one last ditch attempt to appeal to his old friend, but his argument kinda sucks. Yeah, but… but our friendship! Our promise! Dude, you haven’t seen her in seven years. Do you think your words really carry that much weight after everything she’s been through?

— Philip doesn’t say anything. She just pulls the main character in for a kiss as a single tear rolls down her cheek. Then as her carriage pulls away, her dumb, lopsided head tells her father that she just got her hands on the elixir. But uh… does she have a stone in her body already or something? ‘Cause what good is the elixir by itself? Also, can it just sit in her body until it’s ready for use?

— We do see some dark-haired woman in the OP causing trouble for our heroes, so maybe Philip is fated to become Jeanne’s foil. After all, she’s the only other girl to kiss Montmorency. But unless she keeps finding ways to kiss him, I’m not sure how she’s going to sustain herself. Jeanne can only fight for three minutes, after all.

— Oh well, what’s done is done. Our heroes will have to forge on ahead without Philip, so we soon see Charlotte declare her intentions to fight back against England and reclaim the rest of France from the enemy. Too bad she’s not really speaking to the people.

— At first, the upper class elites are skeptical about their chances of victory, but this all changes when Jeanne shows up in her knightly garb. So um… are those half-pants? Who designed this outfit?

— Off to the side, Astaroth is pleased that they’re one step closer to achieving her utopian ideals. Montmorency then wonders why she’s so hellbent on peace and all that junk. The fairy simply replies that she needs to atone. Okay then. Let’s not ask her what she means by that.

— Unfortunately, La Tremoire somehow managed to escape unscathed, and he’s planning his next move. And thanks to the preview for next week’s episode, we already know what he’s up to. Apparently, he’s going to challenge Jeanne’s legitimacy by checking to see if she’s still a virgin or not. Man, people believe such stupid things, because there are so many ways to tear the hymen without having sex.

— Also, I have no clue what’s happening here.

— Last but not least, don’t make this argument at home, kids. I doubt it’ll hold up in court.