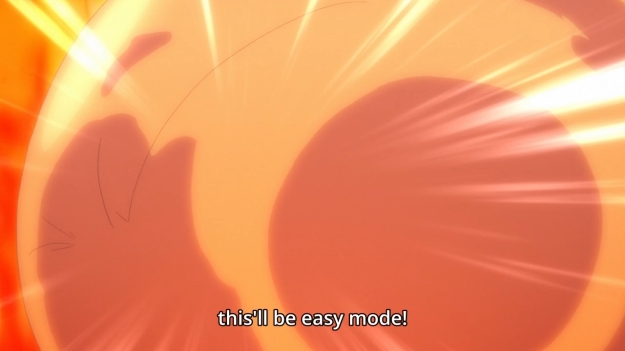 I think we are! Also, we can finally cross off “Saving the cute girl from herself and thus acquire her eternal loyalty” from the quest log.

— Apparently, Shizu was summoned by a demon lord… a demon lord named Leon. What a boring name for a demon lord. Voiced by Lelouch, though. I guess that’s something.

— Some random birdbrain suddenly shows up to try and assassinate Leon, so the latter sics his new summon on the foe. This new guy literally only existed in order for us to see Ifrit flex its muscles.

— I guess fried chicken is for dinner tonight. Why do we need to stick Ifrit in a vessel, though? Why can’t Ifrit just do this normally?

— Aw man, more Shizu backstory? Ugh, I guess. I bet that cute animal gets roasted before this flashback is over. After all, the other girl insists on taking the monster back to the castle.

— That’s not one friendly-looking castle either.

— So uh… what’s the deal, Lelouch? Why do you live in a giant castle with a bunch of pre-pubescent girls? Is that what you do all day? Summon lolis from Japan ever since you faked your death? What a creep.

— Actually, Ifrit ends up taking over Shizu’s body, so both the girl and the cute animal get murdered. A two-for-one deal! Like birdbrain from just minutes ago, these two were introduced for just a singular purpose: make us feel bad for Shizu. Unfortunately, the whole thing feels rushed so my heartstrings aren’t exactly being tugged right now.

— Back in the present, Shizu wakes up from her nightmare, but again, Ifrit threatens to take over. After some struggle, the danger subsides and the girl returns to normal. Yeah, heartburn sucks.

— Apparently, Shizu is no longer in contact with Leon. After all, she’s been around for decades.

— Rimuru invites her to stay in the village, but she says she has to leave. Not only will she endanger them if she sticks around, but she’s also on a quest to look for the demon lord. Maybe she hopes that he can send her back home, but that’s doubtful. Maybe she just wants him to help her get rid of Ifrit, which sounds a little more doable.

— The adventurers also invite Shizu to accompany them back to at least the city, but she shoots that idea down as well. Unfortunately, she took too long to say her goodbyes, so it looks like she might just go berserk on them right now. Oh well, I’m sure our overpowered slime boi will take care of this. I just feel no tension whatsoever from this show.

— It would kinda suck if the newly established Goblin Village suddenly got torched, but that just means they get to have the fun of rebuilding everything from scratch again.

— So yeah, Shizu is the same hero from fifty years ago.

— First, a pillar of flame consumes the girl, then eventually, Ifrit replaces her entirely. Finally, just for funsies, the demon summons a few trash mobs for everyone to play with. Yay. 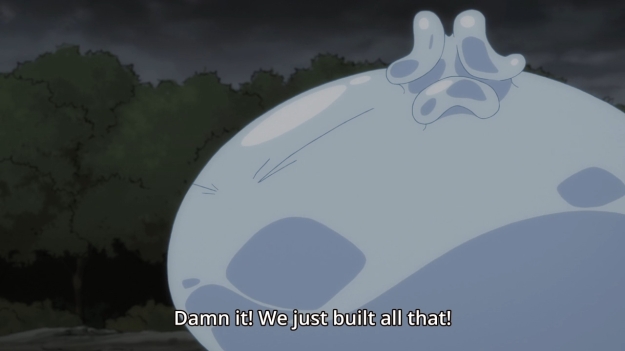 — And yeah, the village gets torched. I’m not even worried for the goblins, though. You just kinda get the feeling that everything will turn out fine.

— Oddly enough, the three adventurers already feel a sort of kinship with Shizu, so they’re determined to stick around and try to stop Ifrit. They admit, however, that they don’t stand a chance against a hero, so this sounds like a suicide mission to me. Plus, they barely know the girl. They’ve only been on what… one adventure? If you can even call it that. I sure as hell wouldn’t throw my life away for an acquaintance, especially when there isn’t a good chance that I can save them. Rimuru will be able to save her, but not these chumps.

— Slime boi tries talking to Ifrit, but no luck there. Meanwhile, the adventurers can only keep one of the trash mobs busy.

— Action pupper to the rescue.

— Rimuru is overpowered, so his tactics will work. The problem is that they will work too well. Back to the drawing board! Still, it must be nice to have an assistant tell you all the pros and cons of any given plan. Usually, you just have to wing it and deal with the consequences. Rimuru has it so easy.

— Eren’s ice spells are effective, so slime boi wants a taste of her magic. Then with his newly acquired spell, he proceeds to tweak it and take out two of the trash mobs in no time flat. Rimuru basically copies your work and makes it a billion times better. Do you think we can ask him to try and swallow society? ‘Cause we’re dying over here.

— Still, you wonder if there’s a limit to what he can absorb. Sure, he can swallow and analyze some dinky icicles, but could he eat the equivalent of Final Fantasy’s Ultima spell?

— Unfortunately, the remaining trash mob decided to blow itself up, so the adventurers are down for the count. Oh well, they served their purpose. They were really only here to help Rimuru learn a new spell. Now that we’re done with the adds, we can finally fight the raid boss.

— Not to be outdone, Ifrit also creates copies of itself, but it’s just one of those moves where the copies are obviously useless decoys. A quick Icicle Shotgun once again clears the arena of everything but Rimuru and the actual boss.

— Rimuru then gets caught in a massive fire spell that you can probably see from miles away. I’m sure the Guild will be very curious as to what’s happening in the forest.

— At first, slime boi acts like he’s about to die, but his assistant reminds him that he’s impervious to fire. It sounds like she’s even losing some patience with him. Like dude, how many times do I gotta keep explaining this to ya? After all, Rimuru never even had to dodge all those fire attacks in the first place. After this battle, Rimuru should probably take a minute and go over his list of traits and attributes again.

— For the first “major boss,” Ifrit is kinda boring, because the demon displays almost no emotions whatsoever. It just wears a dumb look on its face all the time. 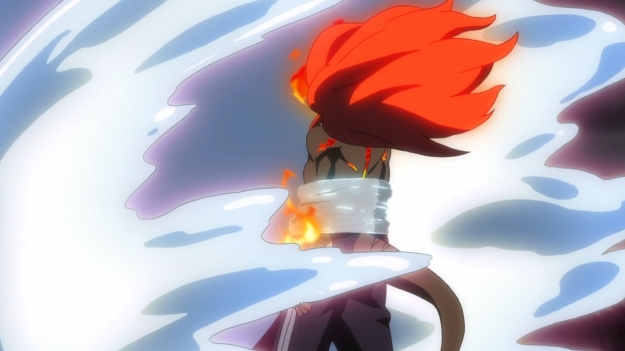 — So slime boi does what he always does and proceeds to gulp down the fire demon. I guess if he had known that fire would do nothing to him, he would’ve done this in the first place. But we needed a full length episode, so let’s pretend that he’s in danger, so we can have him run around all scared.

— And just like that, the skies clear up and Shizu is back.

— Meanwhile, Ifrit is now trapped in the endless void that is Rimuru’s stomach. But on the plus side, he’ll have a friend to play with. Well, Shizu won’t need to worry about getting rid of Ifrit anymore.

— Not much else to say about this week’s episode. The girl of destiny needed to be saved again, so our overpowered isekai hero (when are they not overpowered?) saves the day.

— If you guys wanna write paragraphs after paragraphs to explain why slime boi isn’t overpowered, look… I’m just working with what I’ve been given. And nothing in the first seven episodes remotely suggests that Rimuru is not overpowered.

9 thoughts on “That Time I Got Reincarnated as a Slime Ep. 7: Are we overpowered?”