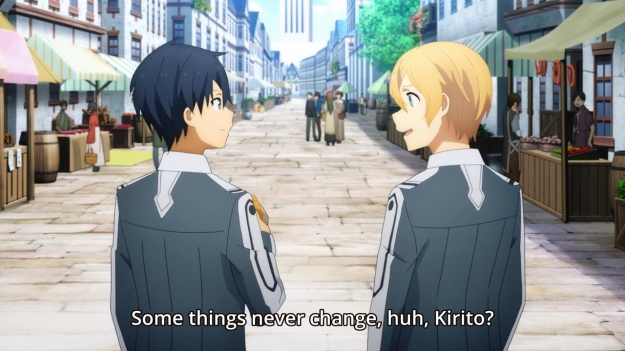 Yeah… you got that right.

— The episode opens with Eugeo dragging Kirito out of bed. They’re at some swordcraft academy — literally a giant school just for swordcraft? — and it looks like they’ve been doing this for quite some time now. Two years, in fact. Two in-game years since they’ve left their dinky starter village! But it’s okay, because barely any time has passed in the real world! The flow of time is not quite convoluted. Just sped up.

— Still, do you suppose there are hardcore fans out there doing hour-long lore videos on this series? “In the Age of Aincrad, there were four haremettes who distinguished themselves above all others… please like, follow, and subscribe. I’ll see you next time.”

— Imagine that, though. Imagine watching two episodes of non-stop exposition just to justify sticking Kirito in yet another generic high fantasy MMORPG. But this time, he’ll get to spend years in it. Like gosh, what adventures should my main character go on this time? I know! Let’s do the same thing we’ve been doing since the start of the series! Aincrad was cool, right? You guys liked Aincrad, right?! Let’s try to recapture lightning in a bottle! But Kirito is already so strong, and the mean people keep saying he’s overpowered! I know, let’s start him out as a baby, so he’ll have to redevelop his sword skills! But then how can he spend years in the MMORPG? Doesn’t he have a real life to worry about? Doesn’t he still have his waifu to care for? I know, just make time flow faster here! All this effort to hit the reset button on Kirito when the writer could’ve just come up with a whole new story with a whole new protagonist.

— There’s something odd about the animation in this show. The way the characters stand out against the background, it almost feels like I’m watching a super high-quality Flash animation.

— Oh, you thought the exposition was over? Lemme tell you what we’ve been doing in the past two years!

— They don’t look much older despite having aged two years.

— I’ll be honest: they’re talking to a Liena-senpai, but I’m not listening to a thing they’re saying. Who cares? I do like how it feels as though Kirito is in no rush to escape from the Underworld. Sure, time has barely passed at all in the real world, but from his perspective, he hasn’t seen or talked to Asuna in two years. That’s not how it works. It would tear me up inside if I couldn’t talk to my loved ones for that long. Forget two years, because who can go a week without their loved ones and not miss them? But do we ever see Kirito bury his head in his hands late at night, wondering if he’ll ever get to return to the real world someday? Pfft, it looks like he’s been sleeping soundly.

— God, they’re still standing around and talking. Even after she leaves, Kirito and Eugeo stand around and talk some more about their super awesome senpai!

— Then after Eugeo goes to bed later that night, Kirito stays up to talk more about the MMO’s mechanics. So what do we see? We see that damn tree again. Sigh. All you need to know is that you need to believe in yourself. No, really. Whatever. Let’s get this over with so I can start watching SSSS.GRIDMAN.

— The next day, we see Kirito spar against Liena, who fights with both a sword and a whip. She eventually beats him, so I guess he doesn’t have enough confidence in himself.

— They then proceed to talk how he can’t beat her, but she can’t beat some guy by the name of Volo. This sure is riveting.

— Like what is even the plot? Save Alice, right? And somehow this will repair Kirito’s soul so that he can come out of his coma in the real world? That’s where you’re wrong, buddy! The true plot is power ranking these swordsmen!

— Confidence, man. Confidence is all you need. Basically, stupid people who delude themselves are the most powerful individuals in this world. Trust me, no one is more confident than whack jobs.

— Apparently, Kirito’s been holding back, so the lady insists that he show her his true strength! But that’ll have to wait, because, uh… curfew. Well, I guess we’ve never stuck Kirito in a bland academy setting, so this is the perfect opportunity to do so!

— And like every generic academy ever, Kirito and Eugeo have to deal with elitists who look down on commoners. Yawn.

— Don’t write checks you can’t cash, Kirito. At some point, he’ll have to depart from this game and return to Asuna in the real world. I just wonder if he’ll even have the guts to tell Eugeo and Alice the truth about their existence. Oh hey, you guys are just artificial souls for some massive military experiment, but don’t let that break your minds or anything!

— Well, maybe Kirito won’t have to. Maybe these two will die before he even gets the chance. Still, I can’t imagine Rath not having backups of these characters’ data. Can you really die in the Underworld? Can’t you just be restored? In fact, Rath should be taking periodic snapshots of these characters’ data as time goes by. Why wouldn’t they? Every database has backups. 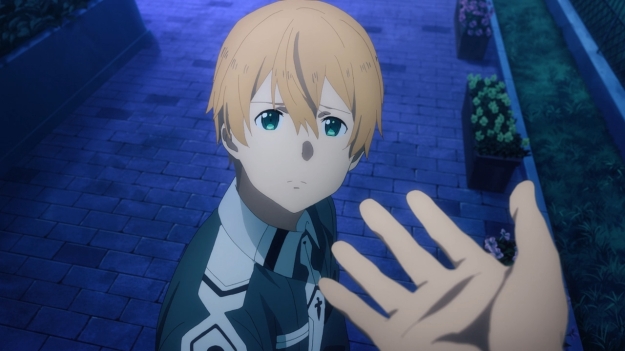 — Eugeo is pouring his heart out about how he’s weak without Kirito, blah blah blah. He couldn’t have gotten anywhere without Kirito! This is supposed to establish their bond, but I’m not remotely interested in his character. Eugeo’s just so boring. It feels like his only purpose at the moment is to serve as a contrast and make his buddy seem cool.

— Oh no, the mean elitist jerks are plotting something!

— The next day, Kirito and Eugeo drop by a blacksmith to pick up a custom order they had placed. Apparently, they took a part of the giant tree, and asked the blacksmith to turn it into a sword.

— Does this sword look familiar or something? Quick, someone look up a lore video!

— For some reason, the blacksmith won’t even charge Kirito for the sword. As long as our hero can swing it, the sword will be free. Geez, at least pay him in exposure!

— Apparently, Kirito can’t be overpowered with a wooden sword, but maybe things will be different with this sword made from a tree! Er, wait…

— At some point, our hero attracts Volo’s attention, so he’s been observing intently from the side. When Kirito attempts to pull off another move, he accidentally gets dirt on Volo’s uniform. Oh no! Swordsmen never get their outfits dirty!

— So even though it’s a day of rest, Kirito is force to spar against the guy. Does that not count as a violation of the rule? I guess not.

— A bunch of people have dropped by just to watch the top swordsmen at the academy face off against a trainee. Nothing better to do, I guess. Naturally, Liena takes exception to this duel. Volo wants to fight with real swords, so Liena is worried. As far as she knows, he’s never fought with real swords! Ah, whatever. Her words will fall on deaf ears, because we’re going to get a fight no matter what.

— Cocky Kirito ain’t gonna back down now. You’ll just have to wait till next week’s episode to see the duel, because we had to talk about, uh, gardening or whatever.