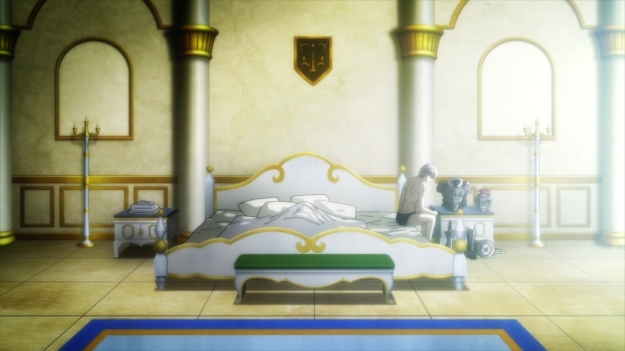 — But before we continue on with the story, we get to watch as our hero’s former master physically and verbally abuse him. The guy reminds Goblin Slayer over and over that he couldn’t save his sister. At the same time, he’s pelting the kid with snowballs with rocks hidden on the inside. Is the guy helping or hurting Goblin Slayer?

— Well, life isn’t binary. For some reason, this guy takes a sick pleasure in being cruel to a kid. Just because his lesson could be put good use doesn’t mean he was a good influence on Goblin Slayer’s life overall.

— Then all of a sudden, his master starts pelting him with riddles. Goblin Slayer has to answer quickly or else a bunch of stalactites will fall on him. Uh, if you want to reach, I guess you could argue that he’s training the kid to think fast on his feet. This is a pretty stupid way to do it, though.

— Alright, back to the present. So of course, beneath all that armor, Goblin Slayer looks like your typical anime protagonist. I feel like as though his voice doesn’t match up with his youthful appearance, but it doesn’t really matter. As soon as he’s up and running, he’s going to be hiding his face behind that helm of his anyways.

— And for some reason, there’s a naked Priestess clinging to him. Shhh, it’s okay! She’s fifteen so she’s an adult now! Wink wink! But seriously, what’s up with this? Does sleeping with a loli have curative effects or something? Is that why Gandhi did what he did? Hmmmmm. 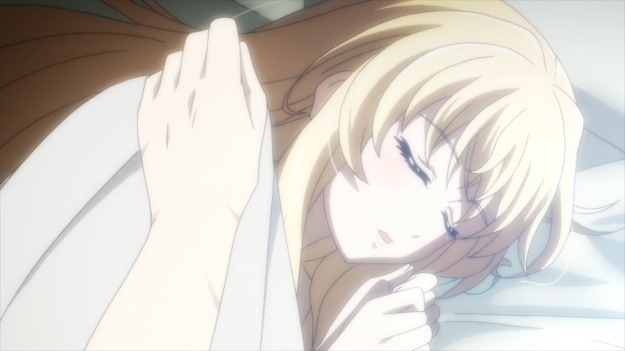 — Dude doesn’t even question it. He just pulls the cover over her body. I mean, I’m not an anime protagonist, and I would still be somewhat shocked if I found one of my friends naked in bed with me.

— Oh hey, Sword Maiden is without her blindfold. But why? Not why does she not have her blindfold, but why do you have to see Sword Maiden’s nipples from beneath her dress? This didn’t happen in previous episodes. I guess since we already we have a naked Priestess, we may as well go hog wild on every other piece of fanservice.

— Uh, according to the lady, he had also shared a bed with her. So that’s how you heal your body in this universe. You find a couple of holy maidens and sleep with them. This is so asinine.

— Yep, this is literally how you revive in this stupid universe. People have such stupid beliefs about virginity.

— Sword Maiden confesses that she couldn’t heal him by herself, because she’s not a virgin anymore. She then tells him all about how she was assaulted by goblins in her youth.

— Jokes aside, if she wants to give us backstory that we’ve already guessed at, whatever. Just don’t give me any visuals concerning the sick act. I don’t need to see it.

— Despite all her heroics and bravery, the woman is forever traumatized by goblins. Few people can understand her pain either. After all, this universe is full of idiots who take goblins lightly. As a result, she yearns for Goblin Slayer. Since he hates goblins as much as she does, not only do they share a sort of kinship, she believes that he’s the only person who can properly protect her. After all, he’s the only person who thinks that goblins are as threatening as she does. And now that she’s found him, she’s afraid of the fact that she may lose him.

— Their connection born out of pain and trauma is fine. I don’t mind that these two mentally-scarred individuals connect with each other. If it had turned out that Sword Maiden was one of the only female characters to yearn for Goblin Slayer, I might have even praised this bit of characterization. The fact, however, that she’s just yet another lady in Goblin Slayer’s harem is stupid. It’s so stupid that it even ruins this intimate moment between these two damaged souls. So far, we have Priestess, Big Titty Childhood Friend, Guild Girl, and how Sword Maiden. The only exception as of now is Elf Girl, and that’s probably because she’s so sheltered, she doesn’t even know what love is. Hurr durr, I’m 2000 years old but I’ve never sent a letter before! But hey, the series is ongoing! She could always end up falling for him one day!

— Goblin Slayer is a man of few words, so he can’t comfort Sword Maiden in this moment. It’s doubtful that he would, anyways. After all, we saw in last week’s episode that he found something suspicious about this whole setup.

— As soon as Sword Maiden leaves the room, Priestess wakes up right on cue. And y’know, she gets all embarrassed because he’s seen her naked. Just anime things. 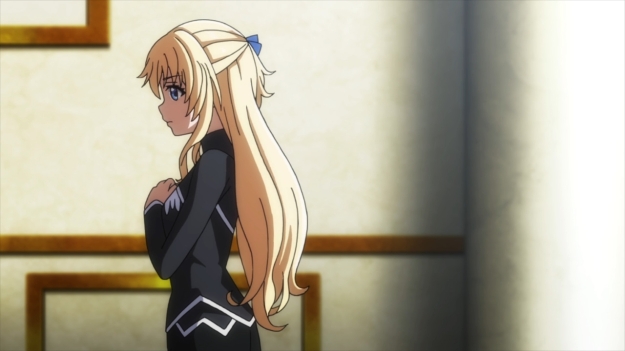 — I had no clue that this black outfit is what Priestess wears beneath her white dress. How do you suppose she gets new outfits? Do you think there’s a Holy Maiden Emporium for all your holy maiden needs? Maybe you get a buy two, get one free deal if you have a membership.

— Meanwhile, the guy proceeds to put on his armor, which is probably grimy and stinky. Well, maybe one of his good friends cleaned it out for him.

— The rest of the group is in good spirits. Despite just suffering through a harrowing experience, they’re eager to jump right back into the sewers and continue their “exploration.” Hilarious.

— And apparently, they haven’t eaten since the battle. I don’t know. That sounds dubious unless Goblin Slayer wasn’t really out for that long. Then again, maybe virgins do heal you that quickly.

— The animation here is so lazy.

— Since Goblin Slayer is supposedly equip-less at the moment, he and Priestess get to go shopping while the rest of the group scouts out the sewers. This is almost like a day-to, you guys. Too bad the guy isn’t much of a conversationalist.

— Instead of buying a whole new chainmail, Priestess opts to have her current one repaired. Why? Her reason makes me roll my eyes.

— Goblin Slayer also needs his armor repaired, but he ain’t taking off that helm again. Till death do they part. 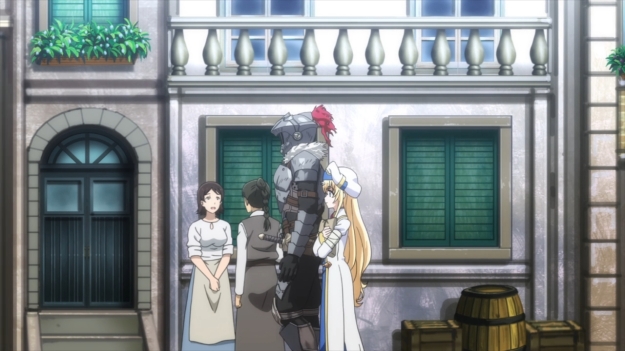 — God, watching these two stroll through town, the show feels so generic right now. Sure, the goblins are bad, and what they do to young girls are even worse. But other than that, everything else about this setting just feels so humdrum. I’m not really into high fantasy, either. The only time I’ve ever been captivated by a setting full of knights, goblins, and dragons is the Dark Souls series. But that’s different. FromSoft portrays a world that is in its death throes. Death and decay is everywhere. Not only have many of the inhabitants gone hollow, so have the locations… metaphorically speaking. This just feels so plain by comparison.

— Oh yeah, you should definitely buy ice cream for your 15-year-old party member. Whoops, I keep forgetting that she’s an adult now. My bad.

— Is this going to be the whole episode?

— I do have to give the story some credit, though. When I complain about Seishun Buta Yarou not giving its characters a break, this is what I’m referring to. It can’t always be doom and gloom. We shouldn’t jump from one death-defying encounter to the next or else you risk wearing the viewers. The problem here isn’t the fact that our hero gets downtime. The problem here is that our hero is boring. And as a result, I’m bored out of my mind as I watch him spend time with his 15-year-old virgin adult Priestess.

— While sitting on the bench, the guy opens up about how he lives and copes with his fears every single day. I guess it’s some characterization. Still feels dry, though.

— Meanwhile, Priestess insists that she hangs out with him not because she feels obligated to, but because she wants to. Shhh, she likes him.

— Then out of nowhere, these two dorks show up. Please, I don’t want to suffer through Slow Witch doing her best to speak two sentences.

— Goblin Slayer needed these two to deliver something that would help him kill goblins. What is that something? Shrug. We’ll find out later.

— Elsewhere, Childhood Friend and her uncle lament that Goblin Slayer still hasn’t returned. The old man is mentally bracing himself for the fact that the guy may never return. On the other hand, the girl is confident that this is Goblin Slayer’s home, so it will always be special to him. Eh. I’m sure he’ll return if the place gets attacked by goblins. You know that’s going to happen sooner or later. Every time we saw Goblin Slayer check on the security of the place, it was foreshadowing a future attack.

— Outside of Goblin Slayer, these characters don’t have much personality or backstory. Hell, Sword Maiden right now has more characterization to her than Childhood Friend.

— Alright, back to slaying gobl–… what on earth is that? Well, this certainly is different from a goblin.

— So what did Goblin Slayer get from his two silver-ranked buddies? Just a bag of fine flour. When the giant eyeball retaliates, the whole room explodes.

— Afterwards, the group finds a mysterious mirror that the giant eyeball had been guarding. Welp, looks like we’ll have to wait till next week to find out why this mirror is so important.

— Well, mirrors are often thought of as portals, right? Maybe this is how the goblins managed to infiltrate these underground ruins in the first place. But who would put this here? And what is Sword Maiden hiding from the party?

3 thoughts on “Goblin Slayer Ep. 8: Oh hey, would you look at that”