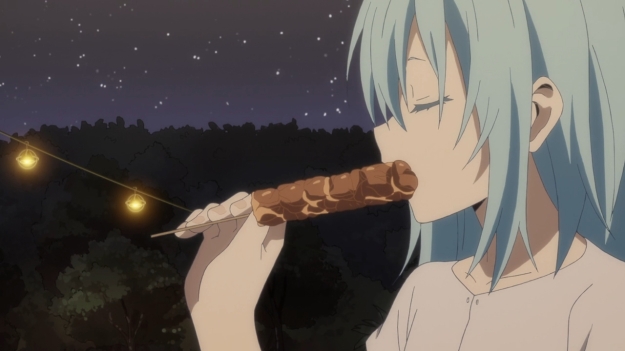 That looks kinda gross. But I guess Rimuru can taste food now, so there’s that…

— Off to the side, the ogres fill the goblins in on what had happened to them. Apparently, orcs are supposed to be much, much weaker. Supposed to be, anyways. But obviously, someone is helping the orcs out.

— Remember when the lead ogre guy wanted to kill Rimuru because of his mask? That’s because the bad guy also wore a mask — a mask which looks nothing like the one in Rimuru’s possession. C’mon, it’s not even close!

— The ogres only numbered 300 before this big massacre? I dunno, that seems kinda small for a village.

— Needless to say, our hero offers the remaining ogres the opportunity to stick around the goblin village. Even so, the ogre leader needs to think about it. Think about what? There are only six of you left. May well depend on a friendly community for food and shelter. Is he unable to swallow his pride? Plus, I feel like both of the girls should be involved in this totally serious discussion. Too bad they’re busy cooking and dancing.

— One of the retainers even go, “We’ll do whatever you and the princess decides.”

— In the morning, the ogre leader’s compromise is to stay until the orcs are defeated. It sounds like he never even talked about this with his sister.

— I don’t see why they have to serve and bow to Rimuru though. It can just be a mutually beneficial pact. Why does one of them have to be the master? Well, we know why. This show is headed towards Rimuru ruling over an empire. Establishing this goblin village is just the first step. Eventually, he’ll become a great lord in his own right. Hell, maybe even a demon lord. It’s the sort of escapism that’s trendy right now. All the nerds out there wish they could just rule over people with an iron fist, but it’s okay, because they’d totally be a sweet and gentle person like Rimuru.

— Anyways, Rimuru proceeds to name the ogres, so they’ll evolve. Again, it’s a strange gameplay mechanic, but whatever.

— For a genderless slime, our hero sure is getting a lot of action.

— The ogres have evolved in kijin. Okay. The ogre leader actually shrank and looks a bit less… interesting, if I’m gonna be honest. Now he’s even more of a generic anime character.

— The same thing happened to everyone else. The princess is now named Shuna, and she looks dull compared to her former self. Last but not least, we have Shion. Okay, obviously she’s not the last, but I’m too lazy to cover the rest of the kijin.

— Elsewhere, we see the 3D orc army on the move, and they apparently number 200,000 strong. That’s a massive army. That’s larger than most modern armies.

— We also get some exposition about the lizardmen. As long as I don’t have to see these lizards flirt and mate, I’m good.

— I guess the one good thing about this show is that we’ve spent very little time with the human nations. It’s mostly been goblins, ogres, orcs, and other demihumans. This is a nice change of pace. I just wish their designs were a little more beastly and a little less… well, human.

— Oh lord, Gabiru, the lizard hero, is staring at the lizard woman next to his father. Please no lizard mating again.

— Talk of the orc lord is popular back at the goblin village too. Something about how this beastman can devour his allies’ fear. Well, that pig we saw two episodes ago must have been turned into this orc lord.

— According to Benimaru, the plague mask guy also offered to name them. Just earlier, the lizard hero said he was named by a Lord Gelmud. Same guy. Same demon, actually. He’s just walking from village to village, trying to name all of the demihumans. I’m guessing that he wants to stir up conflict between all the races, but to what end?

— Rimuru quickly hears that the lizardmen are trying to form an alliance with the goblins. We soon cut to Gabiru whining about how they shouldn’t fear the orcs. His followers think he should become the chieftain instead. I dunno, that hubris might be his downfall. But with that, the episode comes to an end.

6 thoughts on “That Time I Got Reincarnated as a Slime Ep. 10: One more race under the fold”