— So Juliet’s birthday bash is still on. Honestly, it sounds like one of those nightmare sweet sixteen stuff that you can see on MTV. Wait, is MTV still a thing? Sorry, I’m not hip with the kid stuff anymore.

— Well, we learned last week that Airu has been putting Romio through the ringer. If he gets caught with Juliet, he’ll be expelled from the school and kicked out of the family. As a result, the girl is trying to protect him by deliberately avoiding him. This won’t stop the hard-headed Romio from stalking her, though. He’ll still put himself in direct danger in order to spend time with her. Y’see, she has to tell him directly that she no longer wants to see him.

— Simply running away from Romio is not good enough. Again, the girl needs to use her words.

— This is like some kind of expert level kabedonning. Don’t try it at home, kids.

— Finally, Juliet musters up the courage to say what she should’ve said at the end of last week’s episode. And boy, does this send Romio into a tailspin.

— Even time in the infirmary doesn’t fix him up.

— Of course, Hasuki plays with fire and tries to cheer Romio up anyway. She knows that the guy won’t ever love her back, but even though it hurts her to see him this heartbroken over Juliet, she’ll still do whatever she can for the guy.

— Like invite him to play pool with her boobs. That would perk anyone up. 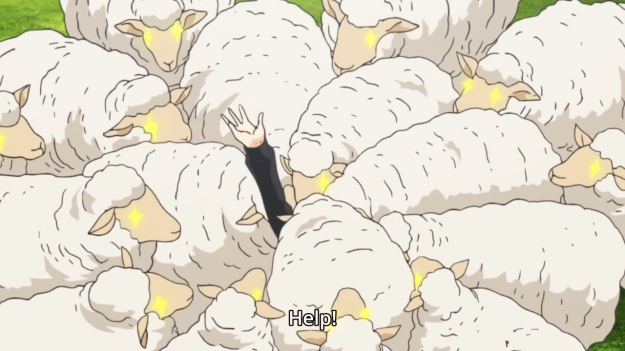 — She then goes and gets mugged by sheep. Random, I know.

— As for Juliet, she’s moping too. Not as bad as Romio, but still suffering. But that’s a thing, you know. When straight couples divorce, they say that men often suffer longer.

— Juliet admits to Char that she still wants to be with Romio, but this self-induced separation is for his own good. ‘Cause y’know, this school has proven itself to be just so awesome. And Romio definitely wants to stay in a family that abuses him for marrying the wrong girl.

— I’m just sayin’, I thought these two wanted to prove that they had the strength to change the world. If they don’t even have the courage to stand up for their own love, I can’t imagine them accomplishing anything substantive.

— So Char decides to pay Romio a visit. First, she slaps Hasuki’s breasts because… uh…

— Then she gives Romio those cookies that Juliet had baked.

— So the guy starts freebasing the cookies like mad. This suddenly makes him realize that Juliet still loves him (duh), so he needs to stop being a sad, pathetic loser and fight for their relationship. What does that mean?

— Apparently, it means crashing Juliet’s birthday celebration. No, y’see, it’s genius. The White Cats will think that the Black Doggies are here to ruin the girl’s party, but during the mayhem, Romio will drag his girlfriend away for some quality one-on-one time. Boy, nothing could go wrong here!

— As for Juliet, she’s gone to see her head prefect for advice. I know nothing about this guy, so I can’t say at all whether or not he can actually help her.

— So these pies are just whipped cream on a plate, right?

— While both factions are busy wasting delicious whipped cream, Romio manages to sneak away in order to look for Juliet. As a result, we run into an old friend. Yeah, that’s Aby. He got kicked out of the dorms and has been living in a makeshift shack.

— Nevertheless, Romio manages to elude the guy by using Somali against him.

— Finally, our hero runs into some blond guy who claims that he’s interested in seeing how everything plays out. Unfortunately, their fun and games come to an end when the rest of the White Cats show up.

— This is when the blond dude reveals that he’s Cait Sith, the head prefect for the White Cats. And now that his partner Sieber is here, he can’t goof off anymore. So things are bad for Romio… I guess?

— Meanwhile, Cait Sith had apparently locked Juliet up in a storage closet. But she intends to climb out of the window in order to escape, and that’s how our episode comes to an end.

— As usual, the drama sucks. The relationship stuff sucks. Just watch this if you want to see some silly anime nonsense that you’ll forget once the season is over. No one’s going to be rewatching this series. 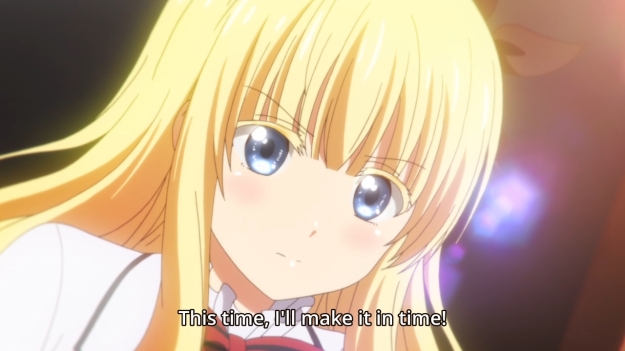 — So why did I even start blogging this show? Eh, Friday night filler.