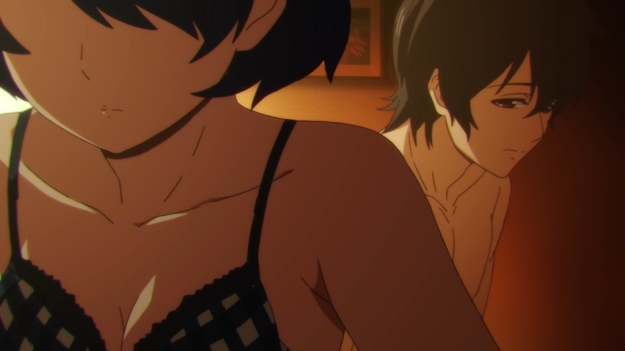 Imagine sleeping with a girl and finding out in the next few days that she’s going to become your step-sister. Imagine also being in love with her older sister, you worthless scumbag. Before I get to the three main characters and their eventual love triangle (you know it’s coming), I wanna get this next bit off my chest. Let’s say hypothetically that I had a kid. Let’s also say that I’m a single parent. One day, I meet a woman and we get along. We get into a relationship. After dating for six to nine months, we both think that we have a serious future together. So do I… a) plan to get married to her then introduce her to my kid or b) introduce her to my kid, see if everything works out between all of us, then take the next big step? Gee, the second option sounds a billion times more sensible, doesn’t it? You gotta be stupid to go with the first option, right? And even if I had to go with the first option, I sure as hell wouldn’t stick everyone under the same roof in just a week. But what do I see over and over in anime? The first option. And of course I do! It always leads to wacky hijinks! Oh man, the girl I just fucked is going to become my step-sister! What a knee-slapper!

Anyways, this was one of the shows that people voted for. Going into this season, I had a few series that I was on the fence about, so I turned to you guys to decide for me. Kakegurui xx actually got first place in the poll, and I really was going to blog about the show. Unfortunately, Netflix has always had the rights to the anime, and I don’t feel like digging for a decent fansub. Well Domestic na Kanojo got second place, so I gotta give the people what they want… for as long as I can stand this show, anyways. Honestly, I have a feeling that this is a show that’s going to piss me off. I have a feeling that every episode is going to end up being a rant about how dumb these characters are. After all, Natsuo has a serious crush on Hina, who just happens be his teacher. Fine, whatever. Kids get crushes on young adults from time to time. It never happened to me, but I can see it. My problem with Natsuo, however, is two-fold. 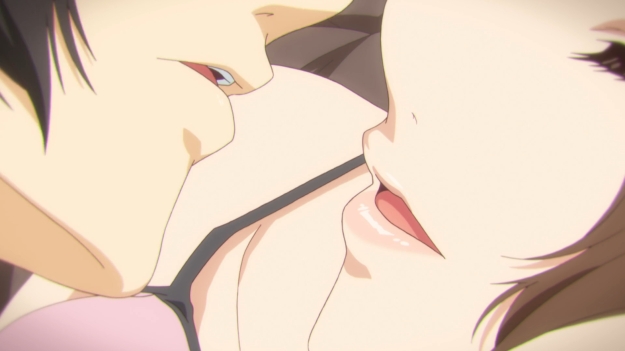 First, when Hina ends up passing out on the couch from drinking too much, he can’t help but drool over her body. He tells himself that he knows he can’t have her, so if he could just kiss her once, he’ll be able to move on. That’s a load of bullshit. You know he can’t go cold turkey. The only way he’ll forget her if he replaces his fixation for with something else. It doesn’t necessarily have to be another girl (like, say, the younger sister). He simply needs to redirect his energy. Natsuo is actually an aspiring writer. Maybe doubling down on that could help him get over Hina. Too bad I don’t actually count on it. But nevermind that for now. What’s worse is that it’s super creepy to not only take advantage of a sleeping woman, but to take advantage of your future step-sister! Way to start this new family on the wrong foot. The only reason he stopped was because Rui walked in on him. How far would he have gone if she hadn’t? Yeah, he’s a horny teenager, but at the same time, I don’t want to hear the “boys will be boys” excuse. We’re not animals. We’re an intelligent species capable of advanced reasoning (in theory, anyways).

But here’s my second problem with Natsuo: in addition to his immaturity, I just get the feeling that he is going to be one of those wishy-washy assholes who can’t decide what his heart really wants. I can’t help but imagine that maybe he’ll start dating one sister, breaks up with her for whatever reason, gets comforted by the the other one, starts dating her… but at the same time, he’ll still have lingering feelings for the first sister. You can just see it coming. It’ll be even more infuriating if the sister he breaks up with ends up realizing what she’s missing, so she tries even harder to win him back. But enough about this guy. Let’s talk about the sisters.

Rui, the sister that Natsuo slept with, currently wants to act as if nothing happened. In fact, when she discovers that they are going to become step-siblings, she wants him to forget their hookup completely. Sorry to break it to ya, but it’s kind of hard to forget the day you lost your virginity. And I totally agree that losing one’s virgin is not a big deal. I totally agree that society builds it up too much. The distinction between being a virgin and not a virgin is honestly pretty arbitrary. Doing it once doesn’t change anything. You’re still pretty clueless about sex, and that’s what a lot of young people (and some old people) don’t realize. So it was interesting to see Rui’s reaction after the deed was done. I like it and I kinda don’t. Yeah, it didn’t change her fundamentally as a person, but at the same time, she still doesn’t really know what sex is. All she knows is what it feels like to have a meaningless hookup with a random guy she just met. Nevertheless, I can’t help but feel bad for Rui, because I get the feeling that she’ll eventually fall for the guy. I don’t know why, because I don’t think Natsuo is particularly impressive as a person. But if this show pans out the way that I expect it to, then she’ll have to watch the guy that she likes chase after and get depressed over her sister. 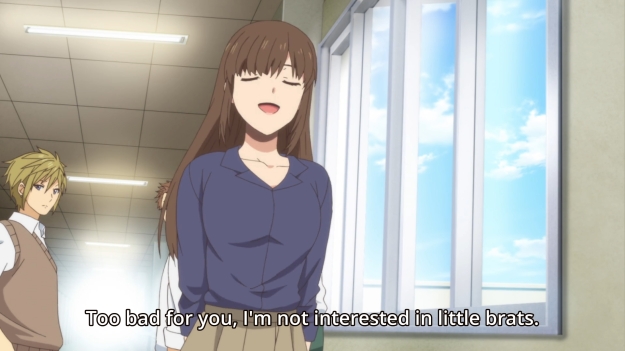 Finally, we get to Hina, the older sister. Not only that, she’s an adult. Not only that, she’s Natsuo’s teacher. So right off the bat, I sincerely fucking hope that she doesn’t actually fall for Natsuo, ’cause that’s just wrong. That’s just stupid. On a practical level, she’s putting her career at risk for a kid. A single kid. There are a ton of men in Japan, and I know they’re not all winners, but really? Your step-brother? A kid in your own classroom? Do I really want to trust a teacher with this sort of faulty judgment? But I just know that we’re headed for a trainwreck. I just know that Hina will quickly become my least favorite character in the story. Yeah, Natsuo’s a creep for trying to kiss her, and I’m not going to play the “boys will be boys” card, but at least his brain is still underdeveloped. At least he can still call himself a minor. If Hina actually entertains the idea of dating the guy — and she’s already acting pretty inappropriately throughout this episode — what’s her excuse? She’s supposed to be an adult. For Christ’s sakes, she’s supposed to be a mentor for young people.

6 thoughts on “Domestic na Kanojo Ep. 1: Boy, do anime characters love screwing their sisters or what?”