What do you do? Anyways, let’s get right to it. 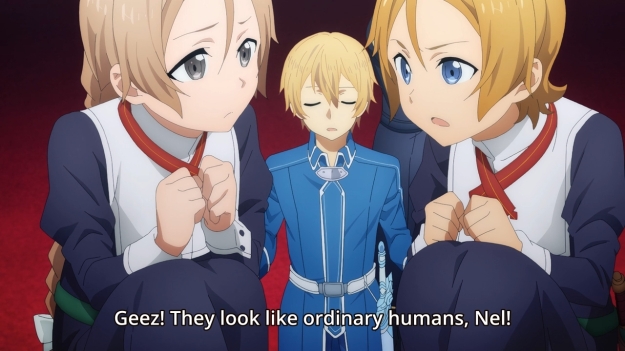 These two girls approach Kirito and Eugeo and claim that they’re nothing more than just two sisters-in training.

For some reason, Eugeo lets his guard down and gets stabbed right in the gut. I guess he just assumed that children were totally harmless. Well, now he knows that little anime girls are nothing but trouble. Kirito also gets stabbed, but… well, we’ll get to him in a bit. 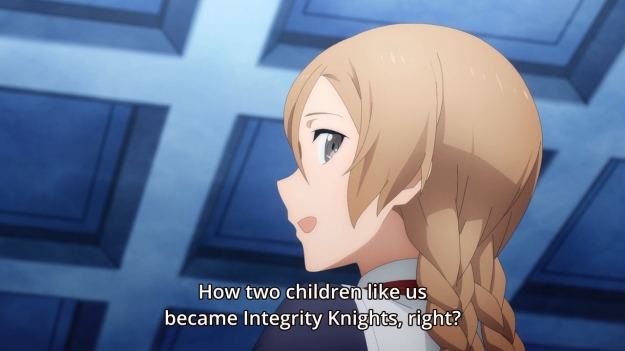 So what do the girls do? First, they proceed to drag our heroes up to the tower. I’m fine with this part. No real complaints here. The girls also, however, feeding us their backstory. Um, did anyone ask?

Basically, the Administrator was running some sick experiments. She rounded a bunch of children in a room and told them to kill each other. Why? Just so she can test her Resurrection magic. It’s not like slapping a phoenix’s down on some dead person. If you don’t die right, you don’t revive right. 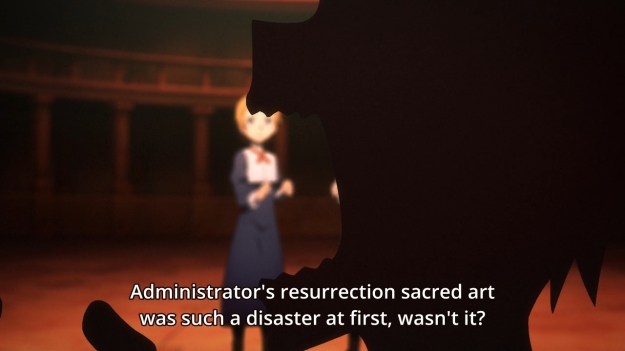 My biggest beef with this sequence, however, is that like practically every other sequence involving the Administrator, it’s delivered to us in the form of exposition. Nothing but one barrage of secondhand information after the next. 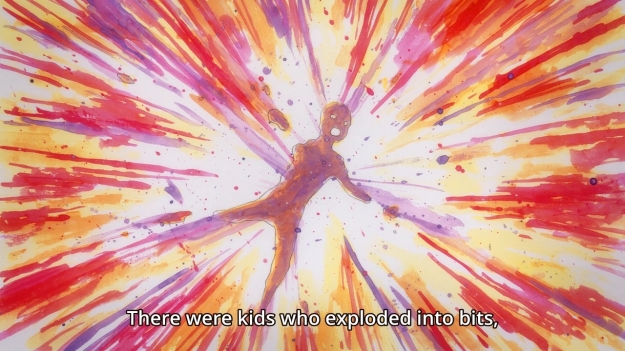 Some kids actually exploded, but do we get to see that? No. We just see some silly visual representation instead. 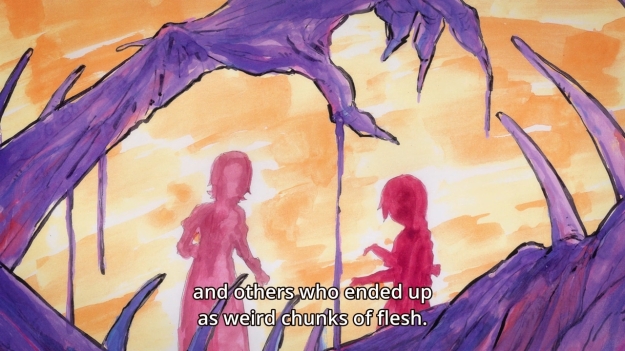 Some kids come back to life as weird chunks of flesh. Again, does the story show us something disturbingly gnarly? Of course not. We’re simply told that this had happen. What a goddamn boring way to tell a story.

Anyways, the two girls ultimately turned out okay, because they’re apparently good at killing each other painlessly and efficiently. As a result, they got to become Integrity Knights, but not quite.

They wanted to prove themselves, so when they heard about Kirito and Eugeo, the two girls decided to take matters into their own hands. See? Aren’t you glad you learned so much about these two throwaway characters? Aren’t you glad they answered a bunch of questions about themselves that nobody ever asked? 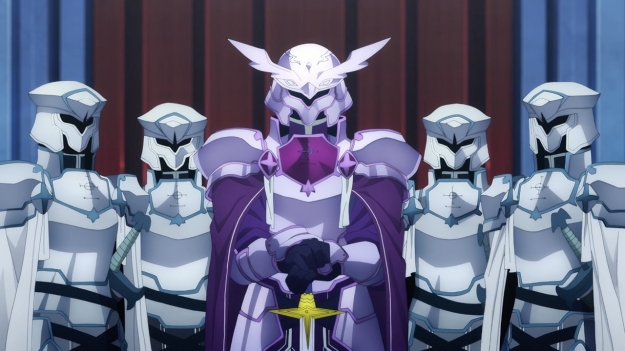 So we get to the 50th floor, and this ganksquad is just waiting for our heroes to show up. 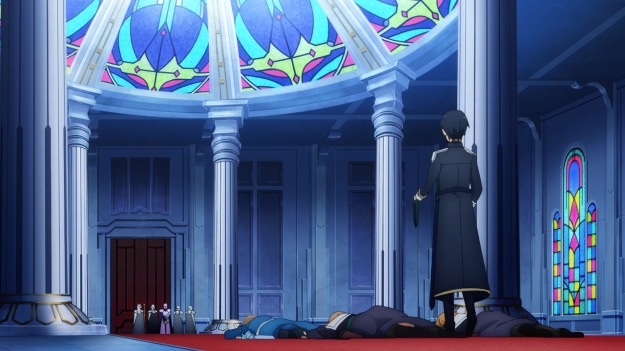 The girls start bragging about how awesome they are, but they forgot that they’re in SAO. Kirito quickly reveals that he’s not paralyzed at all! In fact, he knew they were dangerous right from the get-go! But if he knew this, then why did he bother to play along? What was the point of letting the girls drag them both up the stairs? What was the point of letting Eugeo get paralyzed? 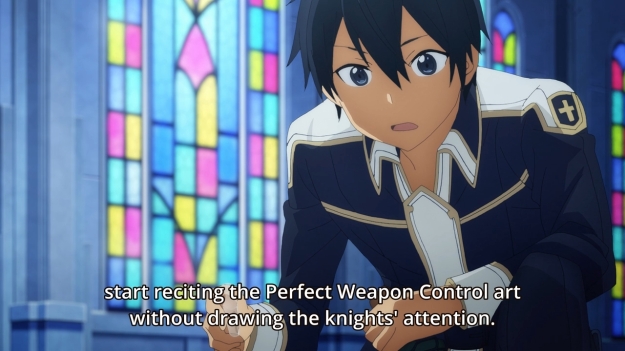 I also like how Kirito tells Eugeo what to do in plain sight of the enemy, but they don’t do anything about it.

Kirito then turns around and reveals everything to the two girls, and those knights are just like, “Shh, don’t interrupt the hero even though we’re here to capture him!”

Finally, even though there are five knights here, Kirito only fights one of them (complete with bad special effects).

So Fanatio, the knight fighting Kirito, has a weapon that shoots you with lasers and leaves gaping wounds in your body. She eventually gets the upper hand on Kirito, so do you know what she chooses to do next?

She gives us backstory nobody had asked for. What the hell? Who the fuck cares where your sword came from? I certainly don’t!

Instead of just taking Kirito out, Fanatio took her time. I don’t know if this allowed Kirito to gather himself, but I like to think it did. So when she fires another laser at our hero, he blocks it with a mirror of sorts. Enough of the attack reflects back and knocks Fanatio’s helmet off, thereby revealing that she is, um, a she. Was I supposed to think otherwise? 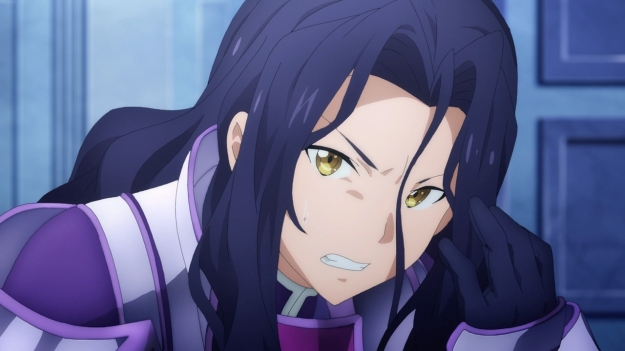 All of a sudden, the story acts like we’re supposed to be surprised to learn Fanatio’s gender. Like dude, c’mon. Okay, okay, some men like the color purple (like Samuel L. Jackson), so the color of Fanatio’s armor isn’t conclusive. But who honestly heard Fanatio’s voice and didn’t think that they were listening to a woman?

Not only that, she starts wigging out on us and accusing Kirito of not taking her seriously now that he knows she’s a woman? Uh, what?

So our hero turns the table around on her! Hah, it is you who is sexist against yourself! Hehe, hoisted by your own petard! 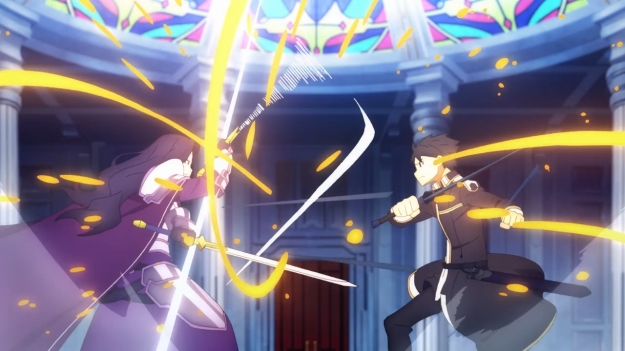 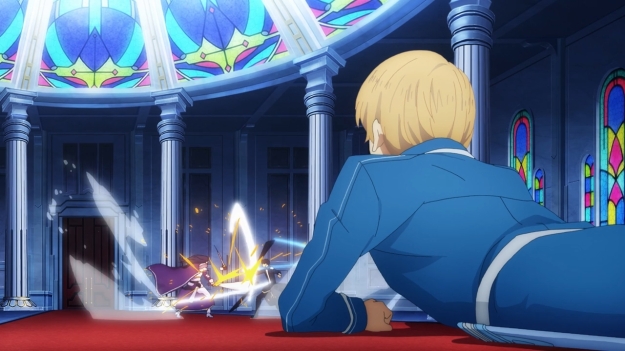 Annnnnnnyways… Fanatio admits that Kirito and Eugeo aren’t pure Hitler evil, but she still has to defeat them ’cause it’s her duty! 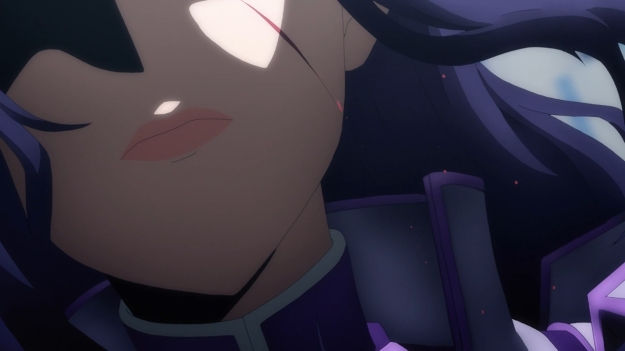 So she starts unleashing an attack that even hurts herself! Oh no, not your detestable face!

Finally, Eugeo decides to be useful…

…and encases Fanatio in ice.

But he also starts getting all triggered, so Kirito has to pull his buddy back from the brink and talk about how hate won’t save Alice.

“I’m still adding her to my harem once this is all said and done, though. Just saying.” Whatever. That’s the end of the episode. I’m sure they’ll quickly defeat Fanatio in next week’s episode and move on.

5 thoughts on “Sword Art Online – Alicization Ep. 15: So you’re in the club and this guy slaps your girl’s butt”