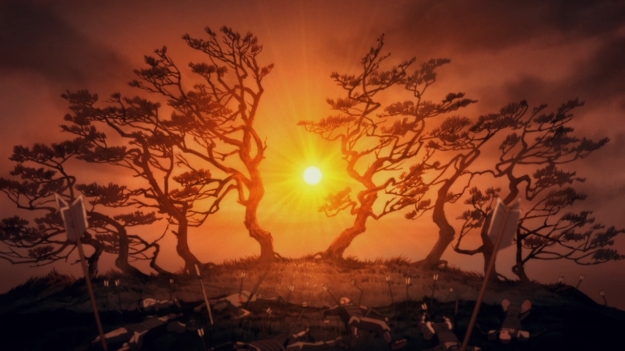 Man, the humans in this story are way more horrifying than the actual demons running rampant. Way more cruel and sadistic, too. Maybe this is why their designs look so comparatively lame and silly. Well, probably not. In any case, sure, demons eat us, but I still need to know more about them. I need to know what makes them tick. Near the end of the episode, Dororo wonders why a demon would want a kid’s eyeballs. It’s not like a pair of eyeballs will satiate you… but for demons, maybe it does. Maybe it’s just in their nature to consume our flesh. Maybe they don’t know any better. We humans, on the other hand, do know better, and yet, we choose to hurt our own kind. A samurai picked a fight with kid and chopped his arm off. Who does that? Judging by the way Lord Kagemitsu dotes on Tahomaru, it’s clear that the man is capable of being a loving parent. Nevertheless, he tossed Hyakkimaru aside like trash. It’s clear that Jukai can heal the sick and thus make the world a better place. But until a woman was ruthlessly slaughtered before his very eyes, he willingly served an evil lord. He willingly crucified live victims in order to teach dissidents a lesson. You look at Jukai now, and you have to note that he’s probably spent the last two decades trying to atone for his sins. As a result, you almost want Kaname, his former apprentice, to forgive the man. But at the same time, he only had a change of heart when a woman was killed. You could maybe that the woman’s unnecessary death was the straw that broke the camel’s back, but even then, you can’t help but feel as though the line between good and evil is just far too arbitrary and capricious.

Anyways, this week’s episode delves into Hyakkimaru’s childhood and thus Jukai’s past. Ever since the doctor threw himself off a cliff and miraculously survived, he has decided to put his talents to good use. He will try and mend the poor and wretched, and he won’t take any compensation in return. How does he afford to put food on the table? How does he afford to even have all of the medical supplies that he needs in order to treat his patients? Shhh, don’t worry about it. But yeah, the gaps here kinda bother me too. Not enough to ruin the show or anything, but just enough to ruin my immersion a bit. In any case, this all makes Jukai sound like a saint, but if we pause to think about it for a second, we would quickly realize that this isn’t really healthy behavior either. Extreme selflessness is abnormal and perhaps even downright dangerous. But of course, it is in our nature to overcompensate. Jukai has done terrible deeds that he can never truly atone for, but he will try. Luckily for Hyakkimaru, the good doctor stumbles upon him shortly after Kaname left. And from then on, Jukai would raise the kid as if the latter was his own son. It’s just a bit weird to see how someone who was born without limbs could now be seen jumping through the trees like some sort of ninja straight out Naruto. I mean, I had assumed up until now that Hyakkimaru would’ve just been a normal child had his actual father not sacrificed him to the demons. But who knows? Maybe when that statue protected Hyakkimaru, it also bestowed the kid with cool shounen powers.

As Hyakkimaru got older, monsters and demons would find themselves drawn to him. Jukai realized that he would have to teach the kid how to fight and defend himself. I’m not sure why a doctor would know how to expertly wield a sword like (again) someone out of a shounen manga, but who knows? Maybe Jukai used to be a soldier before he turned to medicine or whatever. Eventually, our hero became so proficient in killing his predators that he left piles of monster and demon corpses in his wake. Jukai can’t help but wonder if he had erred in teaching Hyakkimaru how to kill. Well, the kid was just defending himself, right? Monsters and demons were naturally drawn to him (and they still are), so he did what he had to do in order to defend himself, right? We’d like to think that, but honestly, we know very little about Hyakkimaru the person. Since he can barely communicate, his personality is a complete enigma. Hell, you can’t help but wonder if there even is a person beneath all those prosthetics. Like I had speculated back in week one, maybe there’s more to this demon-slaying business than simply getting his body parts back. Maybe killing them will restore his humanity. But if that’s the case, then what is motivating him at this moment? What is pushing Hyakkimaru to roam the lands in search of demons? Is he just acting out of instinct? Is it just in his nature to kill them until he finally regains his humanity and can thus discern between right and wrong? Maybe he is no different from the demons themselves. And yet, because humans seem to be so much worse than demons, this isn’t necessarily a bad thing.

One final note: from one of the flashbacks, Tahomaru seemed to feel as though there’s something missing from his mother’s love. I’m sure the woman cared for her second-born, but that doesn’t mean that the kid can’t tell a difference between how his father embraces him and the distance between him and his mother. It’ll be interesting to see how it all plays out when Tahomaru finally meets Hyakkimaru (assuming that they ever meet). You should pity someone who was sacrificed and discarded like our hero was, but maybe there will be bad blood. Maybe Tahomaru thinks his mother will love him more if Hyakkimaru is finally put to rest.