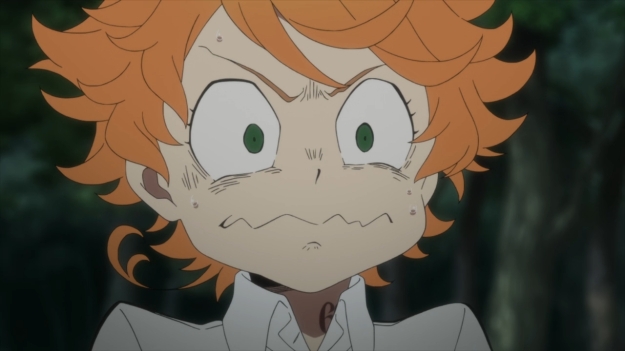 Emma kinda looks like Chuckie from Rugrats. Anyways, I found my attention drifting off during this week’s episode, so this post is going to be a bit a departure from how I usually cover this anime. Here are some scattered thoughts:

— At the risk of pissing some readers off, I’m honestly kinda losing interest in this show. Is it a bad show? Probably not. Well, it’s hard for me to tell. At first glance, the anime certainly looks well-made. But sometimes, a show comes along and just doesn’t jive with you. I think that this is one of those shows.

— After five episodes, I feel as though I have no emotional connection to any of these children. This doesn’t mean that I’m rooting for them to die or anything. Of course not. I hope no one has to suffer, because, y’know, suffering sucks. But honestly, I just don’t care about these kids. Now why is that? Hm. I’m not trying to be flippant either. At the moment, I know that I don’t care for these characters. But the hard part is in articulating my reasons for not liking them.

— Shrug, after sitting here and thinking about it for about half an hour, all I can really say is that they don’t seem very interesting to me. They just feel really flat as characters.

— The number one person that I’m interested in is Isabella. I want to know how she could raise these children as her own, then ship them off for mad profits. Is she happy? How does she get through the day? What is she trying to accomplish? How does she envision the rest of her life playing out? Having said that, it may very well be that she’s just a heartless person without any shred of empathy. So even then, Isabella might not be all that interesting. At the moment, however, there’s still hope that the woman has some depth to her.

— As for Emma, Norman, and Ray… I really don’t desire to know anything about them.

— I always find myself going back to the big reveal in the very first episode. I still disagree with this move, and I have a new reason to complain about: it forced the story down one very narrow path. From that point on, the kids have to worry about escaping, and this should be their only worry. As such, every action and conversation from here on out will have to revolve around the eventual jailbreak. But therein lies the problem.

— The crux of Emma’s dilemma is that they’re all one big family, so she refuses to leave anyone behind. Ray, however, only wants to protect his two friends: Emma and Norman. He doesn’t share the girl’s idealism; he just wants to maximize his and his friends’ chances of survival, and in his mind, this means jettisoning most of the orphans. So we have these two competing viewpoints, but no real meat to either of them. I feel like the prologue needed to be longer. I feel like the story needed to do a better job getting me emotionally invested in at least one of these two viewpoints — but both would have been ideal! — in order for me to buy into the rest of the plot.

— Logically, of course Emma would want to save the people that she grew up with. That’s just common sense. But cold, hard facts aren’t enough to pull me into any given story, and Yakusoku no Neverland is no different. To put it simply, just because I understand why Emma would want to save everyone doesn’t mean that the story can cut this part out entirely. You still need to develop her relationships with the other kids. Don’t just tell me that her bonds with them are strong. Show me why.

— And of course, the same goes for Ray and his cold and pragmatic viewpoint. Logically, it’s easy to simply say that he’s close to Emma and Norman, and he isn’t close to anyone else. As a result, he only cares about those two. But again, cold, hard facts aren’t compelling by themselves. Not emotionally compelling for me, anyways. As much as I typically roll my eyes at flashbacks as a storytelling device, a few wouldn’t hurt! What did Emma and Norman do to earn this much love from Ray? Show me why he cares about them so much when he looks at all the other children with such disdain.

— To take stock, when I watch this anime, I feel cold and detached from the characters and their plight. Sure, I don’t want anybody to die, but I’m not going to be devastated if they do. And yet, I’ve written in a previous post that if Mio in Dororo dies — and it’s almost assured that she will — it’s going to feel like a gut punch. Why? ‘Cause she sacrifices herself to raise all those orphans by herself. She loves them despite all their imperfections. ‘Cause she’s like a motherly figure to them. ‘Cause Hyakkimaru was deprived of his own mother in every way: his mother’s embrace, his mother’s soothing voice, his mother’s warmth, so on and so forth. And for the first time, he might feel as though he’s found someone who can love him like a mother. And yet, Mio is going to die, because she’s pushing herself too hard to be this kind, giving person. Some of what I’ve written above is supported by the show itself. Some of what I’ve written is born from my own inferences. Nevertheless, I feel as though I can see this flawed but human connection between these two characters, and as a result, it resonates with me.

— Yakusoku no Neverland and its characters spend a lot of time telling me all sorts of information. A lot of time. This entire episode consists of these children sitting in a room, explaining things to each other. “I am a traitor for this and that reason.” “We need to x in order to achieve y.” “We can’t do this because it’s too risky for so and so reasons.” I guess I just feel like I’m not being pulled into the story. I feel like I’d be just as excited to read a synopsis on Wikipedia.

— I dunno if I’ll keep covering this show. I guess it’ll depend on next week’s episode.

— The person who walks in on Don and Gilda is probably going to be Krone.