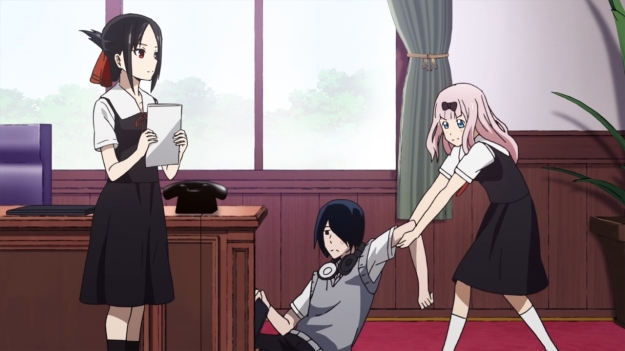 Updates have been kinda sparse lately, but I guess this season just doesn’t really inspire me all that much. I’ll try to work something out, though. In the meantime, here’s yet another post about these two lovebirds getting nowhere.

— Yu, the gloomy guy seen at the end of last week’s episode, is apparently the student council treasurer. Supposedly, he rarely shows up to school, but I kinda get the feeling that he might become a regular presence from here on out. And again, he’s supposedly very observant. I guess this all makes me the anti-Chika.

— The kid actually wants to quit his position. Why? Because his ability to notice things makes Kaguya want to kill him. One time, he spotted a pair of free tickets for a coffee place hidden beneath the table. Really? Coffee places have free tickets? Whatever. Obviously, Kaguya had cooked up a scheme to try and get Miyuki to go get some coffee with her. Yu ruined those plans by finding the tickets.

— Well, I know Miyuki is poor and all, but how expensive can standard drip coffee really be? Even at high end places, it’s like five bucks at most? Unless you’re drinking that cat poop coffee, it’s not gonna set you back too much.

— I don’t really drink coffee, though. Love the smell. Love it as an ingredient in cooking. As a drink by itself? Meh. Unlike most people, I don’t really need caffeine in the morning. Or at all, actually.

— Anyways, Yu also notices how Kaguya is always staring at Chika (specifically her friend’s chest), but he doesn’t actually know why she does this. I guess he’s not that observant.

— Still, Yu manages to put Miyuki on edge. I guess our student council president is very suggestible. So when Kaguya shows up in a costume, it spooks both boys out. What a buncha dorks.

— Even though Kaguya is only playing a murderer, funny how Chika is stabbed her chest.

— In the end, Miyuki tells Yu that the latter has nothing to worry about. Have some faith in your colleagues! But then Kaguya takes Yu aside and tells him not to make things difficult for the president. She might not be a murderer, but she has some concerning traits.

— Chika “found” a book full of personality quizzes, so she intends to grill her friends. Obviously, this is yet another scheme that Kaguya has cooked up. She’s read through the book already, so she knows how to sidestep some of the more embarrassing questions.

— The idea here is that answers to abstract questions can reveal a lot about a person. These exercises are admittedly fun, but they’re ultimately meaningless. First, our answers to anything are always revealing. We are always projecting our personalities outward for the world to see. One need only take notice. A personality quiz is no better than simply sitting down and having an earnest conversation. Second, it’s silly to draw so many inferences from just a simple answer. I’ve been accused of overthinking things. Well, this is textbook overthinking things.

— For instance, Miyuki answers that there would be nine cats in a hypothetical cage. That must mean that he wants nine children!!! I guess if Kaguya really intends to bag this guy, she better prepare herself for a workout (before and after). Luckily, she’s rich enough to hire people to help her wrangle all nine children.

— God, could you imagine nine brats running around? I don’t even want one child.

— The second question has you naming whom you might bump into when walking down a dark path. Your answer is supposedly the person that you subconsciously (or consciously) like.

— Well, Yu is fixated on how much Kaguya wants to kill him, so he ends up naming her. She quickly rejects him in her mind without a second thought. Poor guy.

— Miyuki would have named Kaguya as well, but much to the girl’s chagrin, Chika doesn’t have a poker face. As a result, the guy quickly realizes what the question is trying to tease out. So what does he do? He changes his answer to his sister. I don’t think that was a good move.

— Finally, Chika goes off script and asks them a question off of the internet. Something about being able to pick as many or as little flowers as you want. The number of flowers you pick will supposedly reveal how much love you have for someone. Miyuki unknowingly answers that he would fill up an entire truck. Chika is probably right in that he has a poor person’s mindset. Still, this doesn’t stop Kaguya from letting her imagination run wild.

— If these answers reveal anything, it’s that we see what we wanna see, or in this case, we hear what we want to hear. They’re like those ink blots, I suppose.

— I know he isn’t her senpai. Don’t worry about it.

— Ai, Kaguya’s maid/friend, convinces our heroine to glam it up a little. If you want to be noticed, you gotta make yourself stand out. Kaguya doesn’t need a full-blown makeover, but it wouldn’t hurt to… uh, wear nail polish? I think there are better ways to get noticed, like maybe a new haircut, but supposedly nail polish is the best way to customize yourself without flouting the school rules. I wouldn’t think a haircut would either, but who knows?

— The next day, the girl ends up shoving her nails in his face, but Miyuki still doesn’t comment on them. As a result, her imagination runs wild. Oh no, does he not notice them because he doesn’t actually like her?!

— As it turns out, Miyuki did notice her nails, but he’s too insecure to comment. He’s afraid that she might take his compliment the wrong way. Of course, I think he’s making a mountain out of a molehill. There’s nothing wrong with saying that someone’s nails look nice. If they somehow take offense, that’s their problem. But I guess most teenagers are a little too self-conscious. They’re a little too concerned with what their peers might think of them. On the other hand, the rest of us are in the “fuck it” stage.

— Plus, it doesn’t help that when Yu notices Chika’s new conditioner, she calls him creepy. This puts Miyuki off even more. I think Yu’s problem is that it’s always kinda weird to notice someone’s smell unless it’s really that pungent (like a bad perfume or if they don’t bathe regularly). If you’re not their SO, you probably shouldn’t comment on the cute odor of their hair.

— Anyways, a little introspection helps Miyuki realizes that he’s just making excuses for his self-admitted bashfulness. Plus, it doesn’t take Sherlock Holmes to notice that Kaguya is a bit dejected by his lack of a reaction.

— So at the end of the day, when both kids are set to leave campus, the guy almost compliments her nails. Almost. There’s your weekly 5 μm, I guess.