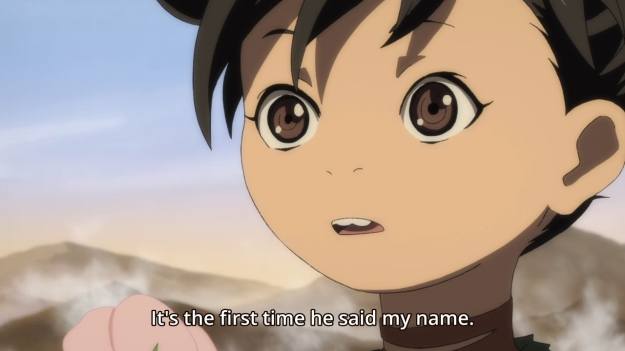 Like with this week’s Mob Psycho 100 episode, I don’t have a primary topic to focus on, so here we go…

— Dororo‘s setting always looks so dreary and hopeless. Makes you wonder how anyone manages to get through the day in this universe.

— So what’s our monster of the week? Well, it’s a big ol’ centipede that flies around in the sky. It is also accompanied by a black cloud. Whenever the centipede molts, its exoskeleton rains down from like ash. Gnarly.

— Apparently, if you sacrifice a bride to the centipede, your village will live to see another day… until the centipede decides to come back, that is. Well, if it’s just going to eat her, why stop at one? Why not have a whole bag of potato chips? Why does a young woman even appease it? Do young women taste better to centipedes or something? Oh well, I guess these are mysteries that we can’t worry too much about.

— Like always, Hyakkimaru and Dororo just happen to be nearby. The kid comments on how the place stinks real bad. Smells like rotten egg, actually. In other words, we’re dealing with sulfur.

— Dororo sees a bunch of men carrying a sad-looking woman. They’re all dressed in white, which I can only assume is traditional wedding garb from the time. Soon afterwards, this Mononoke-esque kid shows up and starts firing arrows at the wedding party. The woman being sacrificed is supposedly his sister, and he’s not about to let some mean ol’ bug eat his family.

— I guess Hyakkimaru isn’t the only one who’s blind.

— It doesn’t take much effort, however, for wolf boy to persuade Dororo that what the villagers are doing is wrong. Unfortunately, his sister is a tougher egg to crack. She’s more than willing to die if it’ll save everyone. Of course, her sacrifice is nothing more than a band-aid for a gaping wound. You’ll appease the monster temporarily, but it’ll just come back. And as long as we stick to tradition and refuse to try and find permanent solutions, innocent people will have to suffer for no reason. Kinda sounds like Final Fantasy X, huh? Well, minus the whole “organized religion is a sham” thing.

— But honestly, life sucks in this universe. It’s probably a struggle to even get through the day, so I’m not surprised that nobody has the luxury to sit around and brainstorm ways to defeat a giant, flying, man-eating centipede.

— So the monster shows up, but Dororo’s got all the confidence in Hyakkimaru. After all, when has aniki ever let us down?

— Well, it turns out the black cloud is like one ball of evil for our hero, so he’s even blinder than… uh, blind. Unable to “see” the monster, all he can do is spin around hopelessly in place. RIP.

— What sucks is the unnecessary narration. It’s like the anime is afraid that we won’t realize what’s happening.

— Predictably enough, the young woman sacrifices herself to save wolf boy. This is what she wanted anyways. The centipede is then about to gulp our heroes up as a follow-up meal, but a fortuitous geyser of water somehow clears enough of the black cloud to allow a thin beam of sunlight to shine through. Apparently, giant, flying centipedes are weak to sunlight. Praise the sun and its glorious incandescence!

— Afterwards, Hyakkimaru is dejected because he was essentially useless in the last fight. Meanwhile, wolf boy uses this lull in the action to tell Dororo all about his backstory. We always gotta have a backstory!

— Nothing too original here. He lost his parents when he was young, so he lived in the woods by himself. But god, humanity sucks. Humanity really sucks. Luckily, he managed to run into a compassionate soul one day, and since then, he has always looked up to the young woman as a sisterly figure.

— Even though Dororo lives in a horrendous world, he is never short on pluck, so he tells wolf boy that they’re definitely going to get their revenge on the centipede. Yeah, Hyakkimaru can’t help, but that’s okay! Kid power!

— When the centipede returns (it’s apparently pissed off from the last encounter), we see Dororo disguising himself as a sacrificial bride. With wolf boy, they eventually lure the centipede to a particularly sulfur-rich place. They then proceed to try to burn the monster alive. Yeah, when you burn sulfur, it gives off a blue flame. At least the writer knows his chemistry.

— Alas, the best laid plan of Dororo and wolf boy doesn’t work. The giant centipede just shrugs it off. Only Hyakkimaru can apparently defeat these beasties. Fortunately, hearing wolf boy cry last night has seemingly knocked our hero out of his funk. Well, I’m sure he also wants to protect Dororo as well. More importantly, Hyakkimaru realizes that he has to start relying on his other (newly acquired) senses, so he’s firing arrows at the centipede. It’s not that wooden arrows will do anything to the monster, but the noise that the arrows make will help Hyakkimaru determine the centipede’s location.

— Dororo catches on quick and recklessly hitches a ride on the centipede. The kid tells Hyakkimaru to track his voice in order to fight the centipede.

— I really have to wonder how much Hyakkimaru understands when the kid talks to him. He has been deaf up until now, right? So there’s no way he understands human language. I read somewhere that when your brain fails to make certain neural connections during early development, this is pretty much lost forever. I’m not sure how true that is, though. Either way, I don’t think Hyakkimaru can understand a lick of what Dororo is saying. Rather, I think he’s just putting two and two together and realizing what the kid is trying to accomplish. It’s a good thing he isn’t a dullard.

— I’ll just skip to the end. Through teamwork, Hyakkimaru manages to blind the centipede and this lures it out into the sun. He then dives inside the giant centipede and slices it in half. He and Dororo proceed to fall from the sky and… well, I don’t know how they eventually managed to land safely, but they did.

— Not only that, wolf boy’s sister is somehow still alive despite spending a night inside the monster. I guess centipedes don’t digest their food very quickly. Yay for her. Sad for Mio who still had to die for Hyakkimaru’s character development.

— And with another defeated monster under his belt, our hero gets his nose back. Great, he can now smell all the sulfur around him. And as vagrants, he and Dororo probably stink as hell.

— In the end, our duo don’t get much of a material reward, but Hyakkimaru does get a flower to appreciate. Not only that, he finally manages to utter Dororo’s name, which sends the kid over the moon. 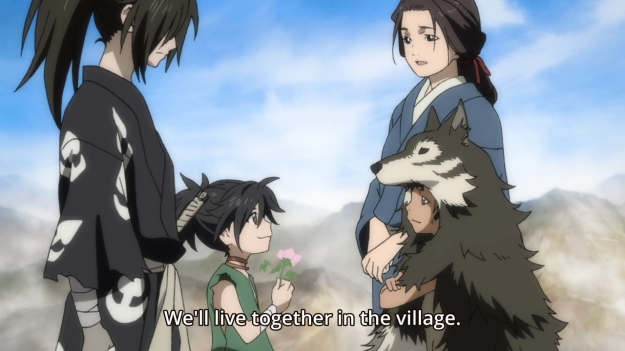 — As for wolf boy and his sister, the woman will just go back to her village. Eh, what else is she gonna do? The villagers suck for sacrificing her, but your chances of surviving alone in this cruel universe is probably very low. All’s well that ends well… except for these two chumps.

— Do you think the spider lady from last week’s episode would’ve dropped anything?

— Eh, I dunno. It wasn’t a bad episode, but it wasn’t particularly memorable either.