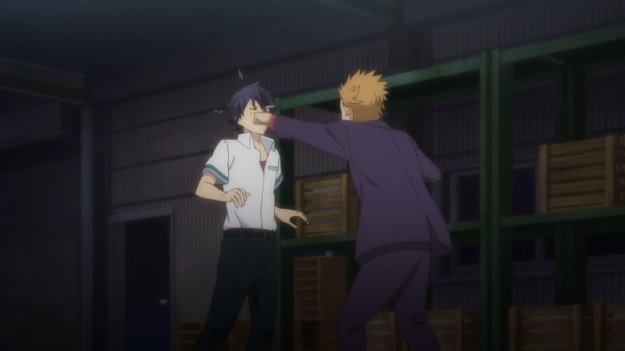 Here’s an unoriginal thought: watching Takuya try over and over to save his stepmother, I couldn’t help but wonder if the original game was an inspiration for stories like Steins;Gate and Re:Zero. Well, as their potential predecessors, I guess I’m not surprised at all to see that this story is a bit rough around the edges. When you tell me that the protagonist has the ability to jump from one parallel world to the next, then you get me excited to watch exactly that. Unfortunately, Takuya doesn’t actually get to have any fun until this week’s episode is nearly over. Instead, we get a lot of rote plot and character development. Y’know, stuff like a flashback where his dad explains to Takuya how parallel worlds work. Then a small tidbit on a cockamamie idea that Japanese history undergoes a revolution every 400 years like clockwork.

Last but not least, we spend a bit time getting to know Mio, the tsundere. Oooh, she’s just so passionate about Takuya’s late father’s ideas. You gotta feel for Takuya’s dopey best friend Yuki, because she’s already blushing a bit too often around the protagonist after just two episodes. Yawn. Anyways, we learn stuff like how she’s the mayor’s daughter. The construction company wants to get rid of the historically important site, and she won’t stand for it!!! I’m sure these revelations are all very important details for future plot developments, but that’s not my problem with the anime. My problem is that the storytelling is just so… lifeless and undynamic. 20 minutes of our hero walking around, chatting with different talking heads until something interesting finally happens. Yep, sure sounds like every goddamn visual novel I’ve ever played.

Finally, near the end of the episode, we find Takuya attempting to save his hot stepmother from two hired thugs. Not only are they after his late father’s research notes, they might want a piece of ass on top of it… or do they? I mean, doesn’t Takuya find it peculiar when one thug says to other, “Was this guy in the script?” Then in our hero’s last failed attempt, that goon who works for Ayumi suddenly runs in with a goofy ass grin on his face. Oh my god, it’s as if this whole scenario is staged and he here to steal Takuya’s stepmother’s heart! Oh well, he’s gonna do the same to his best friend, so he can’t complain. Also, maybe it’s just me, but the stuff coming out of the thugs’ mouths just sounds like something straight out of a cheap porno, ” It’s been a while since you’ve had a man, right? I can tell by the look on your face.” Ah well.

Anyways, I’m sure Takuya won’t be happy to see another man encroaching on one of his haremettes. As a result, there’s probably a good chance that he’ll do everything he can to prevent that from happening. But we’re talking about parallel words, aren’t we? Even if he stops this guy from stealing his stepmother — as ridiculous as that sounds to say out loud — there are assuredly worlds in which she does get stolen (nevermind the fact that she’s an adult woman who can make her own decisions). So I dunno, this whole thing feels like an exercise in not just futility but also egoism… kinda. There are multiple me’s. There are multiple consciousnesses of me’s. I want this me — the me that I can call myself — to experience the best possible outcome. But every time I jump to a different world, I leave the old me to deal with my (our?) poor choices. So as a viewer, what exactly am I rooting for? What am I missing here? There are going to be multiple me’s who gets screwed. What makes me special over the other versions of me by virtue of making a leap?

Quick side note: a cursory research reveals that there’s a PS4 version of the original game. Unfortunately, the worldwide release isn’t coming out until much, much later. Well, it’s not like I was going to buy it… but the thought did cross my mind.