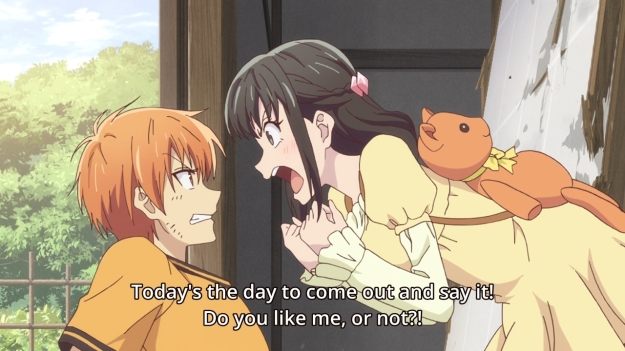 I know they’re supposed to be distant cousins, but facts aren’t going to stop me from poking fun at the anime.

— So the new girl is also a Soma, and she really, really likes Kyo. She has always liked him. You could also say that she likes him too much. She swears she would even ignore any future transgressions so long as he agrees to be with her. Unfortunately for her, the feeling isn’t mutual. Kyo seems to treat Kagura as nothing more than a nuisance. Nevertheless, he’s all bark (meow?) and no bite; he’ll yell at her like he yells at everyone else, but he’s honestly quite passive with her. And like Yuki, Kagura can get quite violent with Kyo.

— On paper, I should feel bad for the cat. He gets bullied in every episode he’s in. On the other hand, he’s not much of a charmer himself, so I guess I just can’t empathize with him.

— But seriously, I thought this series was supposed to give me the feels.

— Kyo does eventually get serious. When Kagura sees Tohru as a potential rival — and she is! — the former starts blabbering about Kyo’s true form. That’s when the guy steps in and gets mad for just a split second. Then afterwards, we’re right back to abusing him for comedic purposes. Haha, beating people up is fun!

— Anyways, like Tohru, Kagura is like a perfect waifu. With a snap of her fingers, a smorgasbord will appear before you. It’s kinda lame how these dudes usually just sit around and wait for these girls to cook for them.

— Kyo, however, is still pouting, so he’s pumping some iron in his room. Stupid cat doesn’t realize that you can’t build muscles on an empty stomach. 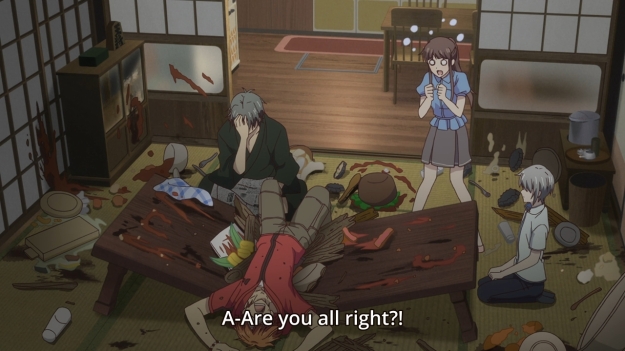 — One thing leads to another and we eventually see Kagura smash Kyo through the floor and into the dining room. Again, slapstick is one thing, but I think this show takes it a bit too far.

— Welp, we just wasted all that food. Kagura immediately tries to make amends by running out to buy groceries. Before she leaves, she asks Shin if she could possibly stay here with them, because she’s worried about Tohru possibly stealing Kyo away. She’s right to be worried! But unfortunately, she doesn’t have permission to stay with them. Then Shin mentions something about how he also gets jealous. Shrug. I’m sure that these are all breadcrumbs for future plot developments. But see? Kenja no Mago should take notes on how to foreshadow. It’s not that I’m impressed by Fruits Basket or anything. I just feel that this is storytelling 101.

— At the store, Kagura realizes that she left all her money back at the house. Luckily or unrealistically, good ol’ Tohru has caught up to the girl and is ready to pay for everything. Our heroine is perfect in every way!

— So we learn a bit more about Kagura and Kyo, but not really. Their flashback simply doubles down on the fact that she has always liked him. But why does she like him? Beats me.

— Meanwhile, the boys kinda just sit on their bums and do nothing.

— The girls come back and start cooking up some hamburg steaks. Honestly, I’ve never had this dish. Sure, I’ve had hamburgers. Hundreds of them. I’ve made meatloaf too. But prepared in this exact way like in my animu? Never. 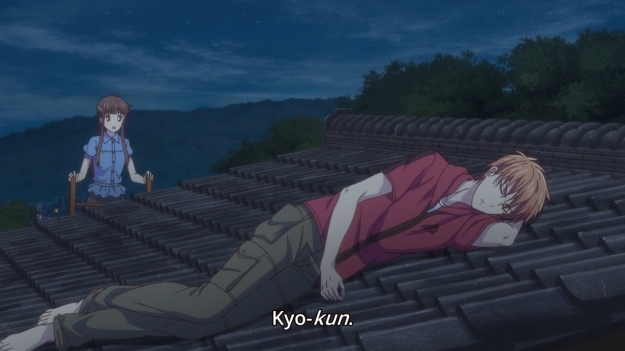 — When it’s almost time to eat, Kyo is missing. Tohru finds him pouting on the roof. She starts talking about how it’s reassuring to have someone like Kagura in his life. Y’know, someone who loves him so much. Ah, the glass is always half-full with Tohru. She tries to see the silver lining in everything. But there’s a danger in that. After all, optimism is but just one perspective among many. And if you focus too hard on it, you’ll blind yourself to other possibilities. From her point of view, she might feel as though she’s respecting Kagura’s earnest feelings for Kyo. But what about Kyo’s feelings? Isn’t it exasperating to be constantly pursued and harangued by someone whom you have no feelings for? Wouldn’t you say that Kagura’s behavior is a bit stalkerish? Ah well.

— When Tohru asks Kyo about his martial arts training, he brightens up and starts singing his master’s praise. I dunno, if he’s such a good master, why can’t Kyo even come close to beating Yuki? Just sayin’…

— But back to the original point, which is that Tohru gets to see a rare side of Kyo. As a result, she wants to try and bring that forth. Make him a little less angry with life. But like I said in a previous post, you can’t fix everybody. Most people know that these stories are pure fantasy. But there are those who want that storybook romance, and sometimes, that leads people to think that they can fix that bad boy or girl even when it just isn’t possible.

— I mean, poor girl doesn’t even know right from left.

— Anyways, Kagura makes amends by plopping a fried egg on Kyo’s hamburg steak. Something about how the way to a man’s heart is through his stomach.

— The next morning, Kagura is back to her hot-and-hotter nature. In one of her mood swings, she accidentally bumps into the paper boy just standing right outside the house. As a result, we learn that she’s a cute, little piggy. Well, a boar. 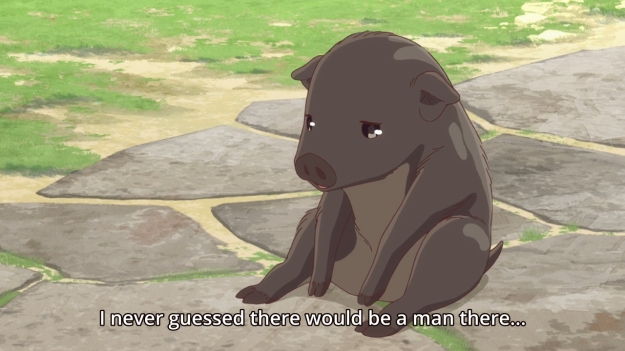 — Tohru claims that it all makes sense now. The reason why Kagura always runs single-mindedly towards her goals is because she’s a boar! Really? I didn’t know people thought that about boars. Rather, I’m told that people born in the year of the pig tend to be loyal. This is why we eat them.

— Well, fair’s fair, so when Kagura eventually turns back into her human self, she’s fittingly nude.

— Later that day, we see Tohru checking out a few books and magazines on martial arts and gardening. Geez, I’ve never gone that far for my friends. But perfect Tohru has nothing better to do than to read up on her new friends’ hobbies — boys she has only just met!

— But the girl gets a concerning call which seems to suggest that she’ll no longer be able to live with the Somas. Well, I doubt that’s going to happen…