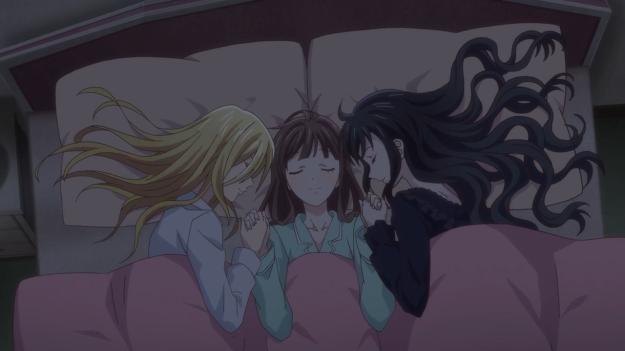 This looks really uncomfortable, but props to Tohru if she can really fall asleep with her arms like that all night. Before I dive into the episode, I gotta talk about how I haven’t been posting much lately and how that’s pretty bad. I’d be lying if I said I hadn’t lost a metric ton of interest in anime in general. My mentality on most days is that work sucks and the last thing I wanna do is pump out some uninspired post on a show I don’t care about. Nevertheless, I don’t want the blog to die out for sentimental reasons, so I’ll try to get back on track tomorrow somehow. Y’know, catch up on some of the shows and see if something sparks my interest. But for today, it’ll just be another goddamn Fruits Basket post. Without any further ado…

— The cultural festival is here, and of course, the onigiri idea is a huge hit. Tohru’s onigiri are just perfect and flawless like her. Honestly, she’s just an uninteresting heroine. I never feel as though she has anything floating in her head but positive platitudes. I saw a play (it was Significant Other, if you’re curious) yesterday, and I couldn’t help but remark on how uninteresting it was until the characters truly spoke their minds. I don’t know how long that’s going to take for Tohru, and even when the time comes, will she even have anything of value to say?

— Anyways, their class is also a huge hit because Yuki is all dressed up like a girl, which… somehow makes him even more appealing to girls. It’s a cultural thing, I guess.

— Then to make matters worse, the obligatory shota is back, and this is made doubly creepy by the fact that this show’s gimmick is all about the cute bishies getting naked every time the Zodiac curse is triggered. Who on earth wants to see a naked shota? Plus, I say “obligatory shota” ’cause they really truly are pointless. Have you ever seen a reverse harem in which the girl actually picks the shota character? It just doesn’t happen. And yet, there’s always at least one to complete the zoo of bishies. It’s a character that serves no narrative purpose than to be another piece of eye candy, but it’s also eye candy that looks forbiddingly young. That’s just gross as all the loli bullshit on the opposite side of the spectrum. Anyways, Momiji is here… 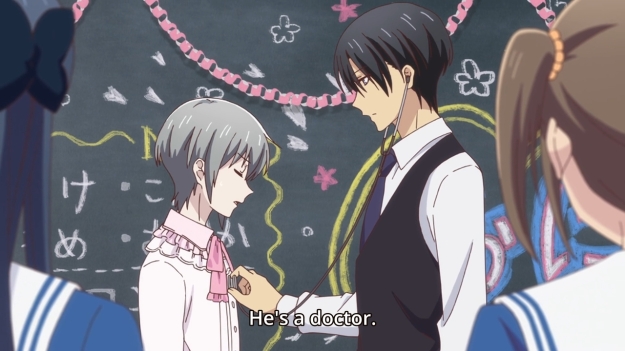 — …along with Hatori, some no-nonsense-looking doctor dude. Yuki is instantly on high alert, and we’ll learn later that Hatori’s the one who usually erases people’s memories should the secret ever get found out.

— No worries at all for our airheaded heroine, though!

— Yuki casually mentions how Hatori has seen him naked, but this is natural ’cause the latter is (again) a doctor! I dunno, dude, I don’t think I’ve ever gotten naked in front of my doctor.

— We also learn that our rat has bronchial problems. That’s… too bad? Shrug, I guess these are breadcrumbs for possible future developments. I just can’t predict what. Maybe he’ll try to chase after Tohru one day and get an asthma attack.

— Needless to say, creepy shota character is here to be creepy. Kids should learn not to touch people without their permission, but this rabbit apparently never got the memo. Luckily, the show doesn’t force us to see a naked, little boy, but only for this episode. I can’t guarantee anything for the future.

— And all this time, we keep hearing bits and pieces about Akito, a character who sounds domineering and perhaps even deranged.

— What follows is a eye-rolling scene where Tohru and Yuki tell each other that they find the other person cute. “You’re cute!” “No, you!” I know Yuki is supposed to be competing with Kyo for her love, because that’s just how these romantic anime series work. But I’m over this coupling already, because I don’t think they can challenge each other and make the other person grow. I think he’s just seeking any sort of companionship because he’s so woefully lonely and isolated as a member of the Soma family. As a result, he clings to the first person who doesn’t put him on some weird pedestal like the rest of their fangirling peers. But that doesn’t make Tohru a viable romantic partner. At best, she’s just like a nice, older sister. They have no real chemistry beyond that.

— I mean, it’s such a huge cliche when these bog standard romantic heroines go after the bad boy, which is Kyo in this case. But it’s also the simplest and easiest romantic dynamic to write, so I feel like authors just default to it. 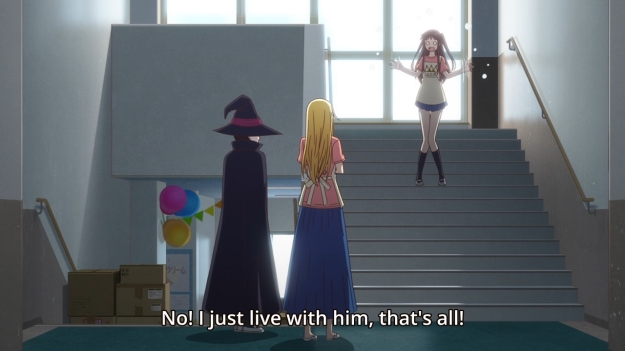 — Anyways, as the two of them leave the rooftop, he warns her to avoid being alone with Hatori for obvious reasons. Meanwhile, Tohru’s so-called besties are finally going to confront her about her sudden closeness to the Soma boys. I say so-called besties, because she still refers to them by their family name.

— In order to evaluate Tohru’s current living situation, Arisa and Saki invite themselves over to the Soma residence. I like how they have to stick to their stereotypes, so Arisa is literally dressed up as a typical delinquent while Saki is in her gothic lolita get-up. Normal clothes be damned.

— We learn that Shigure writes both cheap romance novels and what is supposedly high literature. Why is it high literature? Just look at how the cover tries to hypnotize you into thinking that this dog has anything important to say.

— Arisa and Saki later tell the boys that Tohru is the first friend they ever had. Funny how these besties never once noticed that she was camping out in the woods. But as soon as she makes some male friends, alarm bells go off in their heads. Hilarious.

— We briefly cut to Hatori reporting to the feared Akito. We still can’t really get a good look at the character. I already know Akito’s big “secret.” I just wanna know what the character design looks like in the remake. Still, from the voice acting, you can easily tell it’s a girl trying her damndest to sound all boku. Maaya Sakamoto has had a long, fruitful career. Anyways, it is revealed that she wanted the whole Tohru experiment to go badly. Unfortunately, Tohru is like sunshine personified.

— Back at the sleepover, Tohru tells us all about how she got her treasured cap. Something about how she got lost one day, but a boy led her back home and gave her the hat as a gift. Naturally, she never got a good look at his face for reasons. The way Kyo stands outside her room, we’re led to think that maybe Tohru had met him on that fateful day. She even confesses how that boy was probably her first love. Pfft. But since we can’t see the kid’s face, you never know. Might have been Yuki. 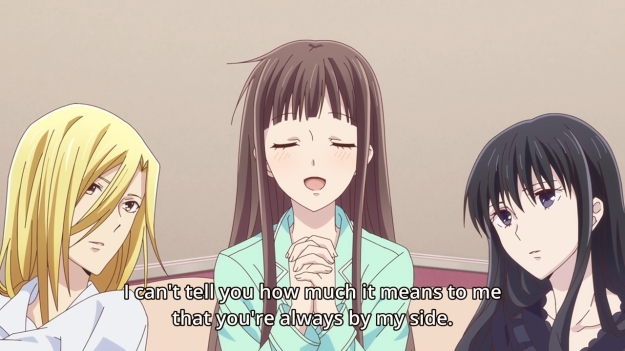 — Then the rest of the episode is just her gushing about how much she loves her friends. It’s a little too saccharine for me.

— We can’t go an entire episode without any conflict, so the next morning, Hatori asks Tohru to come to the Soma estate. He also tells her not to let the others know about this. Our heroine remembers Yuki’s warning from yesterday, so she’s a bit scared of what might happen if she agrees. Nevertheless, she gets a little too curious when the good doctor mentions that the girl might have a chance to meet Akito. To me, I’d be like, “Who cares?” But naturally, Tohru’s just too nosy for her own good.