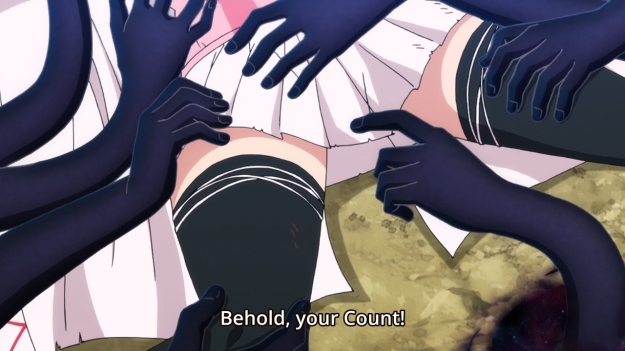 But before we get to the show that is actually about numbers, let’s get the disposable sports anime out of the way. 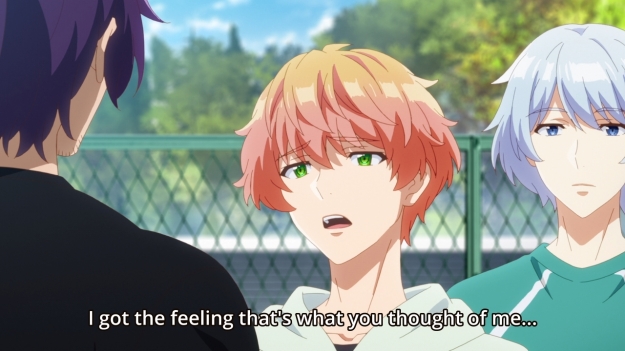 First up is number24, an anime series about hot college boys with six packs playing rugby. The main character got into a motorcycle accident, so he’s not allowed to play sports anymore. But since he just can’t stay away from rugby, he signs up to be the team’s manager. And who knows, maybe he’ll eventually recover from his injuries and start tackling the boys again. I certainly am not going to stick around to find out. Sports anime rarely interest me. Off the top of my head, I can name two series that I liked: Ping Pong and H2. And the only reason I liked them was due to the character drama and not the actual sport activity itself. There was also that badminton anime that I was interested in (but can’t ultimately recommend) because it focuses heavily on drama. After fifteen minutes with number24’s first episode, I’m just not feeling it. The pacing feels too placid. 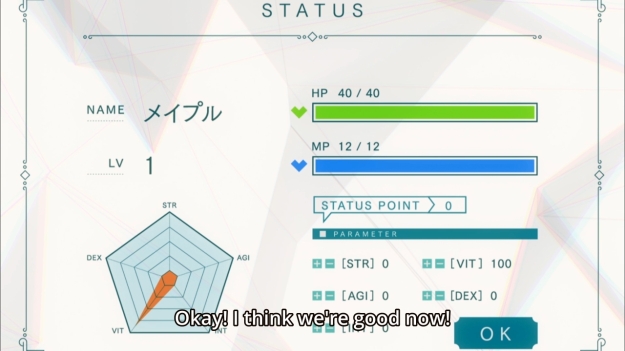 Next is one of those shows with a ridiculously long title: Itai no wa Iya nano de Bougyoryoku ni Kyokufuri Shitai to Omoimasu. What is it about? Short answer: Shield Heroine. Long answer: even though you shouldn’t feel pain in a video game — and I don’t care that it’s a VR MMO ’cause why would you play a game where you can feel pain — our girl creates a defense-only character because she wants to avoid getting hurt. Silly, right? Well, it turns out her build is super effective. Despite being a complete newbie, Maple (her real name is Kaede) keeps stumbling from one victory to the next. This essentially means that the game is poorly designed. Okay, look, I know it’s a silly TV show based on a silly manga for funsies. I know that realism doesn’t matter as long as you tell an entertaining story. I got it. But as someone who has played MMOs for over a decade and RPGs for even more decades, I just want to say a few things. I mean, I gotta have something to write about, right? So if you’re going to waste your breath telling me to chill out because no one should take this anime seriously, well, I already warned you ahead of time.

First, it’s oh-so-creatively titled “New World Online.” Talk about not even trying. Second, there’s no way Maple would be the first to try out a defense-only build. Hell, it never should’ve even gotten out of alpha with a build this broken. And if you’re going to go with this gimmick, why not go all the way? Let’s have an all STR character. And an all AGI character. Then have them work together in unconventional ways to defeat monsters. Just Maple seems kinda boring, no? But who knows, maybe those aforementioned characters will show up later in the story. I just don’t think if I’ll still be watching the show long enough to find out. Third, games usually have some form of penalty if you attempt to fight anything too high level. You can stack defense all you want, but if a boss is ten or more levels higher than you, they gain some sort of damage bonus that will negate your defense. Fourth, VIT is VIT. RPGs, whether we’re talking tabletop or MMOs, usually have an additional defensive parameter like MND. They might even have more than just two, but simplicity’s sake, let’s just stick with VIT and MND for now. VIT is for physical attacks and MND is for magical attacks. It seems like New World Online won’t even bother with the latter as far as I can tell. Fifth, any self-respecting developer would hotfix this build immediately, ’cause you’re not supposed to just eat your way to victory.

Yes, our strength-less girl manages to solo a dungeon all by herself by eating the giant hydra boss. Sounds like the devs need to nerf jaw damage. Who needs to kill Ultima Weapon for Cloud’s best sword if you can just deep-fry Safer-Sephiroth and eat him like a chicken wing? Anyways, even though Maple is a complete newbie, her exploits are spreading far and wide. Alright, now that I got all the anal retentive stuff out of the way, how’s the anime as simply something to watch and enjoy? Meh. I jokingly refer to it as Shield Heroine, but the fact that she uses a shield is where the comparison starts and ends. If the first episode is any indication, this will be a light-hearted show of a girl making friends and going on adventures with her online buddies. If New World Online has any lore to speak of, we don’t see it here. If there’s any looming conflict to look forward to, you also don’t get any hints of it here. All you have in the first episode are some very basic MMO mechanics and low-hanging gags like a starting area bunny throwing itself at Maple for an hour before killing itself from exhaustion or… I dunno, a really bad headache. Our fun, light-hearted show isn’t actually fun enough. At best, it takes up space.

Finally, let’s finish the day with Plunderer, a story with too much lore to start with. So uh, everyone has a number imprinted somewhere on their bodies. This is just an excuse to plant the number in lewd places when it comes to girls. For example, our heroine Hina has her number on her right inner thigh. 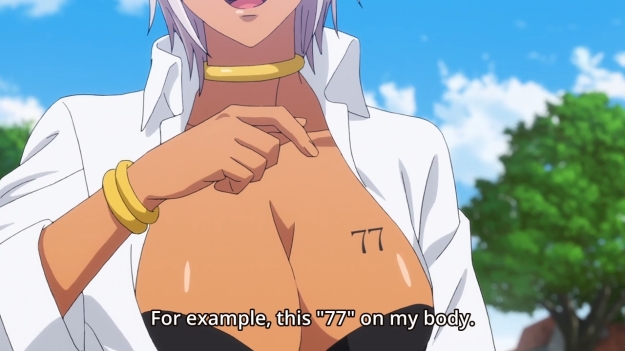 We also meet Nana whose number is on her left breast. As for dudes? Well, it’s in all the usual, innocent places. So what’s this number about? Apparently, numbers rule this world. The higher your number, the higher your social status. But what the numbers actually represent seem so goddamn arbitrary. For example, Hina’s number is 441, and it represents the distance she’s walked. Yeah, that’s right. On the other hand, Nana tells us that her number represents the number of people who likes her food. You’re really gonna base a social hierarchy on that? Plus, who decides what an individual should count as their number? Could the number of times I’ve taken a dump be my number? Not only that, if your number hits 0, you get sent to the abyss which is apparently what happens to Hina’s mother, an event which kickstarts this entire story. Yep, 0 is bad… kinda. After all, your number can go into the negative. Our hero Licht has a number of -999, and this is okay because he has two numbers! The other one is 5700, which cancels out his -999. So at this point, I have to wonder if I can honestly believe any number that I see. Hell, why can’t you just draw a large number on your body and fake it till you make it?

But wait, we’re not done yet! If your number is higher, you can compel people to obey you. Cause y’know, Hina walking a ton totally means she’s worthy. If the lower number individual doesn’t want to obey, then they gotta fight. Yup, trial by combat. You just gotta! Well, you gotta because this is an excuse for shounen action so just deal with it. In the end, the loser will see their number go down to 1, a step away from death’s door (unless you have a hidden cache of numbers!!!). The difference is thus handed over to the winner so they can do even more bossing around. Holy fucking shit, all that just to watch one episode. But we’re still not done, because Hina has in her possession something called a ballot. It’s this sparkly ball with the number 10000 on it. Since numbers are the bee’s knees, people want that ballot. But what does it do? Don’t know yet! Maybe you gotta collect them like dragon balls, then make a wish to have a ginormous number!

Other than the whole numbers brouhaha, the episode itself is very much by the numbers (ho ho ho ho). Naive girl looks for her hero. Naive girl bumps into a pathetic sad sack of a pervert. Naive girl meets a bad guy whom she mistakes to be her hero. Naive girl becomes a damsel-in-distress. Pathetic sad sack of a pervert saves her at the very last second and thus reveals that he’s the bomb-ass hero she’s been looking for all along. Yawn. If it weren’t for the numbers thing, this show probably wouldn’t have much going for it. So who knows, maybe the torrential vomit of numbers lore was a blessing in disguise.