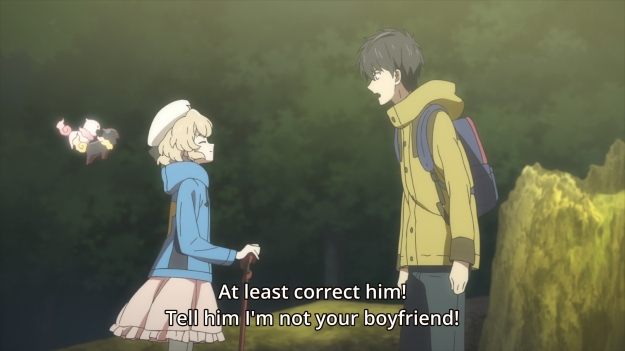 So before we start talking about this week’s episode, I should mention that I read ahead in the manga. Now, Kyokou Suiri is originally a novel series, but hey, what choice have I got? It’s not like I can read Japanese. And boy, have I been bamboozled again. My desire for a tolerable romantic couple continues to go unfulfilled (there was Ore Monogatari a while back but I hated it). For now, Kotoko’s affections are sadly unrequited. Kuro has shut off his heart for reasons that will probably come to light later in the anime series so I won’t say anything right now. If you’re familiar with Zetsuen no Tempest, a lot about Kyokou Suiri starts to make sense. Both series love to delve into fanciful explanations for their mysteries. But more importantly, both series feature a male protagonist who cannot love the girl in front of him until he gets over the girl from his past. Sure, Kuro is close to Kotoko. Sure, he trusts and cares about her. But I wanted more, man. I wanted lovey-dovey crap. Ah well.

I actually enjoy this series in its manga form, so I’m hoping to feel the same way about the anime adaptation. I like the art, I like Kotoko’s cheekiness, and while the mysteries aren’t spectacular on their own, our heroine’s theories are pretty fun. Unfortunately, the overarching story feels like it’s nowhere near the finish line, so I’ll probably be near my midlife crisis by the time this series ever wraps up. But jokes aside, there isn’t actually all that much to catch up on. We have just three novels even though the series started back in 2011. I wonder if the books only recently got popular. In any case, it makes sense why the anime adaptation is only going to get 12 episodes. I honestly wanted them to devote an entire cour to just the first major arc, and maybe Brain’s Base did give this an honest shot. But first, we get a quick short story before diving head into something a little more serious. But I’ve said enough about the series as a whole. Without further ado… 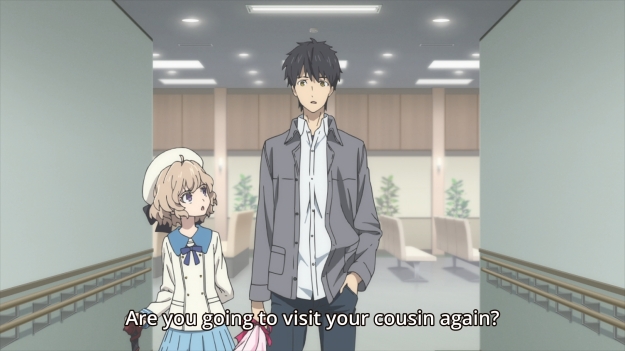 — She’s so tiny. The top of the girl’s head barely even reaches his shoulders and that’s with her hat. Even if I’m rooting for Kotoko, they look so odd together in public.

— When I see someone with Kuro’s regenerative powers, I naturally wonder what it would take to truly kill them. Yeah, it’s a little morbid, but you guys must be curious too, right? If you pulverize Kuro, could he still somehow heal himself back up? There’s an NPC in Bloodborne who seemingly can’t die. So of course, a hunter goes and grinds her up into nothing but pulsating lumps of flesh. Despite that, she’s still somehow not dead, but she also couldn’t recover her original form (unless you pull some shenanigans later). So yeah, the same thought crossed my mind here.

— Kotoko is ultimately a nice girl, but she’s also very devious. As a result, you’re always wondering if she’s trying to manipulate you. She invites Kuro to come with her to the mountains under the pretense that his fearsome presence would help negotiations go smoother with a great serpent. But at the same time, she is really hoping that his protective instincts would kick in. The truth is that Kotoko’s too impatient. At this point in time, Kuro barely knows her. Why then would he drop everything just to accompany her to the mountains in the dead of night?

— With yokai-related anime, we get the same general themes, i.e. humans used to worship these spirits as gods, but that time has passed. What I like here is that the great serpent never really had god-like powers. It’s only fitting that these religious practices eventually faded into obscurity. Most shows would preach that the average person should find room in their busy lives to rediscover their spirituality. 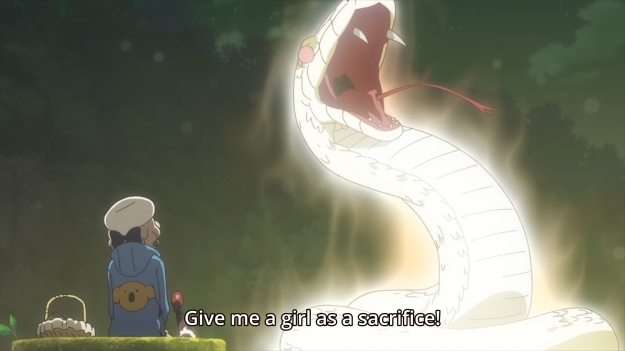 — Another thing I like about these spirits is that they’re not all-wise and all-knowing. They even admit that they can’t keep up with the times so they require Kotoko’s help. I think in the manga, the girl explains that they have a difficult time thinking outside the box. They lack human ingenuity.

— I guess this is the guy’s way of showing that he cares. I’m sure he was much more sensitive and attentive with his ex. Then again, Kotoko hasn’t really given him a choice. She has pretty much forced her way into his life whether he likes it or not. I have to wonder how receptive we’d be if the roles were switched. Had Kuro been the chaser instead of the chasee, many would dub him creepy.

— Back on the mountain, we see that Kuro did come all the way out here because he was concerned about Kotoko’s safety. This didn’t happen in the manga, so I guess the anime wants to soften up his portrayal. Maybe this is more true to the novels, but I wouldn’t know. Still wish I could read Japanese… if I could, I wouldn’t have to wait so long to play my weeb games (looking at you, Trails of Cold Steel 4).

— Anyways, the great serpent wants to understand why a young woman would dump a body into the swamp, but then say out loud, “I really hope they find you.” She even confesses to the crime when brought in by the police, so what reason would she have to dump the body in the first place?

— From here on out, Kotoko starts whipping up one explanation after the other, hoping that she’ll eventually sate the spirit’s curiosity. I won’t go into detail about any particular theory that our heroine offers up. I want to point something else out: our heroine’s job isn’t to discover the truth. She’s not a detective like Sherlock Holmes. The actual whys and hows don’t concern her. As long as the great serpent buys at least one of her explanations, then she will have done her job. 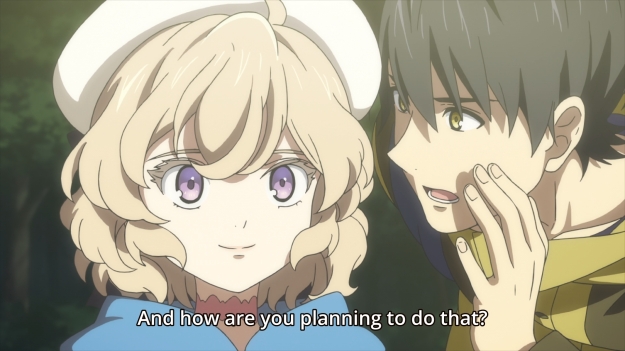 — In other words, I guess this is why she’s the goddess of wisdom and not knowledge?

— Plus, unless they can talk to the alleged murderer herself, the real truth is likely unknowable.

— There’s an amusing moment where Kotoko wraps up one theory only to be met by yet another objection from the snake. So what does she do? She immediately dismisses what she had just put forth; she’s not invested in it. For anyone new to the series, they obviously wouldn’t know this yet, but what our heroine does here actually sets us up perfectly for the Steel Lady Nanase case…

— Unfortunately, we run out of time before Kotoko can offer up her most fanciful theory. I just wonder how else the anime will differ from the manga. Considering how they made Kuro’s actions speak louder than his words, maybe Brain’s Base will throw me a bone and have these two share more romantic moments than what I saw in the manga.