For once, the good guys don’t stop the killer by the end of the episode, but they do get pretty darn close.

— After kissing Hondomachi, Kazuta looks just as surprised at his own actions. He quickly runs off. For a detective, Hondomachi sure does a poor job of chasing the guy down. She seems to put forth only a token effort.

— After giving herself some time to think, Hondomachi speculates that Kazuta must have wanted to kill her, but for some reason, his desire to kill got mixed up with feelings of love. Hmm, is this plausible? Maybe…

— One of the most common fetishes out there is the foot fetish. But why feet? What makes feet so sexy to some people? One popular theory is that feet is mapped very close to genitalia in our brain homunculus. In other words, if some wires get crossed, you might associate a foot with a penis. But I mean, it’s still only a theory. I just couldn’t help but be reminded of foot fetishists as I listened to Hondomachi explain why they still haven’t detected The Gravedigger’s cognition particles. It turns out they’ve been looking for the wrong ones.

— So the girl returns to the copycat killer’s house and starts searching. This time, she isn’t looking for an intent to kill, but rather, an intent to love? Sure enough, the Wakumusubi goes off.

— But how far can we go with this? Can we detect cognition particles from someone who has an intent to steal? Rape? Commit white collar crime? At the moment, this technology is still highly classified and limited in its usage, but imagine if it blows up. Imagine if we started planting the Wakumusubi in every nook and cranny to prevent crime before they happen. Well, I guess we’d have Psycho-Pass.

— Elsewhere, Momoki tries to question The Perforator about The Gravedigger’s motives — after all, the latter was one of the former’s victims — but he gets a vague response. Something about how no two head holes are the same, and if the wind doesn’t feel cool in Kazuta’s hole, then it’s bad. Alrighty.

— Now that we can construct Kazuta’s ID-Well, it’s time for Sakaido to jump-… er, fall into action. And as always, Kaeru serves as his reliable sidekick. 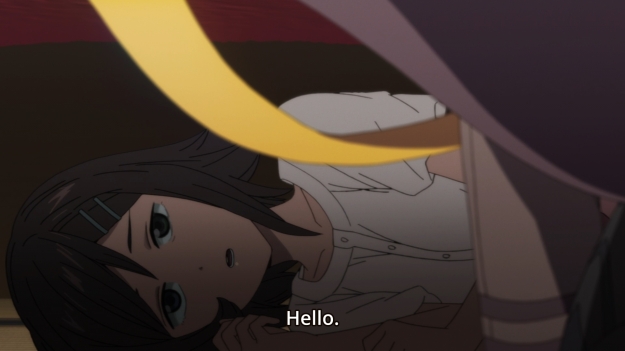 — Our brilliant detective instantly realizes that Kaeru’s blood doesn’t look natural. The killer is trying to hide something with the blood “pattern.” Sakaido thus locates an individual hiding beneath the body. According to the researchers, this individual’s identity is an amalgamation of Kazuta’s victims… but doesn’t she kinda look like someone whom we’ll meet later in the episode?

— Meanwhile, the police have been sent to search the premises of a soy sauce brewery. Said brewery is located on the grounds of Kazuta’s family home. This is all happening so fast, so you can’t help but feel that a twist is coming. Is this a bad thing? I dunno. Maybe. Twists should come as a surprise, right? We shouldn’t be able to brace ourselves for them.

— Back in the ID-Well, the amalgamation tells Sakaido that a boy hid her because he wanted to protect her from a “super scary monster.” So our brilliant detective grabs a vase and starts exploring. And what should he find? John Walker killing said boy. Hoo boy, I had completely forgotten about John Walker. After all, we haven’t seen him since Fukuda’s ID-Well.

— Like before, John Walker escapes easily, and there’s nothing that our hero can do about it.

— If John Walker is truly the serial killer creator, then how is he accomplishing this? Is he some sort of master manipulator? Do you cross paths with him a few times in real life and then somehow become a serial killer?

— Or is John Walker even real? Maybe he’s a construct much like Kaeru. I dunno, though. This idea is hard for me to embrace. Sakaido sees Kaeru every single time he dies and re-enters an ID-Well. But it doesn’t seem like you can do the same with John Walker… at least, I don’t think you can. If Sakaido resets the ID-Well, would he see John Walker kill the boy again? The anime isn’t exactly clear on this. From my recollection, he always seems to disappear from these ID-Wells as if he doesn’t belong to them — as if he is a foreign invader more akin to Sakaido than a recurring part of someone’s damaged psyche.

— The focus shifts back to Hondomachi and Matsuoka. Sakaido had found a photo in the ID-Well, so our duo simply picks the prettiest woman in the picture to visit. As a result, we meet Imami Nahoshi, one of Kazuta’s former classmates. 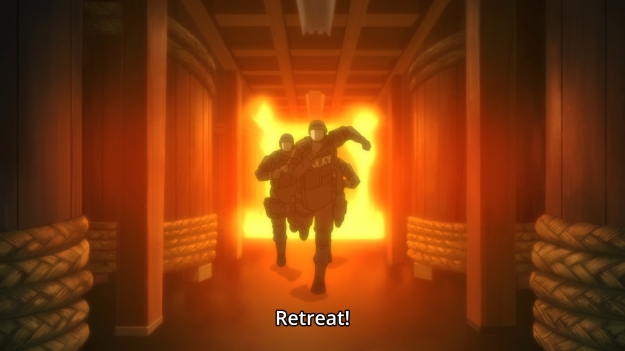 — At the same time, the police trigger a booby trap at the brewery, and the whole place goes up in flames. Man, these poor chumps have been taking losses after losses. They couldn’t save the victim last week and they just straight up die this week.

— This dude probably dies… I don’t actually remember if he’s an important character or not, but the episode felt the need to single out his potential demise.

— Back at the Imami residence, the woman tries to play dumb at first, but Hondomachi quickly calls her out (in the nicest way possible). This episode is very much our young detective’s time to shine. I always had a feeling that she is the series’ deuteragonist.

— In the middle of the conversation, Hondomachi’s head wound starts to bleed. When Imami wipes it with a tissue, you can see her just staring at the blood. Throughout their conversation, Hondomachi apparently seems to notice Imami continually staring at the wound. I couldn’t see this behavior myself, though. I wish the episode had done a better job of visually portraying this crucial bit of evidence. 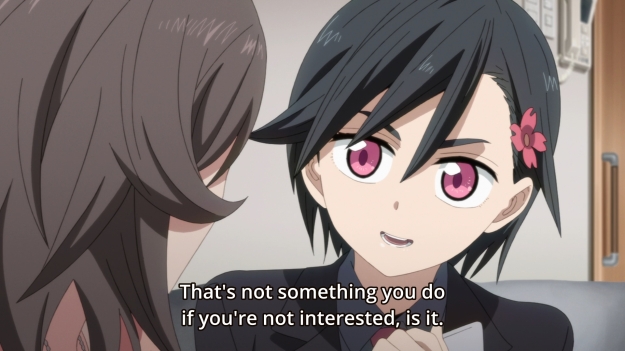 — After some digging, Hondomachi manages to conclude that Imami must have harbored romantic feelings for Kazuta, but they were unrequited. Not only that, the woman has never had a successful relationship because she’s still hung up on the guy.

— Up until now, Imami has been mostly calm and collected… except for a few odd outbursts like repeatedly calling Hondomachi cute. In fact, you could say that she is perhaps two calm. When two detectives show up to question you about a former classmate, you would feel a bit unnerved, no? Hondomachi must have found this bizarre, which is why tries to bait out an angry reaction from Imami. Revealing her kiss with Kazuta seems to have done the trick.

— So here comes the twist: Imami’s fixation on Hondomachi’s wound must mean she likes to watch people die! Wait, huh? Really? That’s quite a leap, isn’t it? Alright, sure, Imami has been acting kinda weird. But I’m still not sure why staring at a wound — a very peculiar wound that would catch anyone’s attention — and a bloody tissue indicates a love to watch people die. I’m not a brilliant detective though, so I guess I’ll just have to defer to the experts.

— Hondomachi thus connects the dots: Imami is the true Gravedigger. She’s the mastermind even if Kazuta is the one doing all the dirty work. But why is he helping her? His ID-Well suggests that he’s trying to protect her from the monster, but how does burying people alive accomplish this? I guess I’ll have to wait till next week to find out.

— We get a post-credits scene. Again, the girl in Kazuta’s ID-Well — the supposed amalgamation — sure does look like Imami.

— Also, if the head wound screwed both Kazuta and Fukuda up this badly, what does this mean for Hondomachi in the future?

— This wasn’t a bad episode. It had my attention from start to finish. If I had anything to quibble with, the pacing felt a bit rushed.