Oh lord. The only thing possibly more annoying than Bakugo is a room full of screaming children. Hell, that one on the far right looks like a monster. What is that? A dinosaur? Anyways, let’s get started with this… kinda boring, kinda unnecessary episode.

— Is it truly unnecessary? I dunno. If you care about Todoroki and Bakugo, I guess it isn’t. I just want to move on with the story, though.

— Endeavor is one of those overbearing parents who would get into a shouting argument with a Little League umpire. Also, if he’s like this with Todoroki, what would he be like if one of his kids didn’t have any potential?

— Man, the real Camie is an airhead. Oh well, I guess I wasn’t expecting much.

— Gang Orca yells at Todoroki, Bakugo, and Yoarashi. Something about them lacking heart, so in order to prove themselves, they’ll have to win over a bunch of elementary school children. Man, I’d just disqualify myself right there and then. All that screaming and boundless energy… ugh. Granted, I don’t think I have the personality to be a generic superhero in the first place.

— Even for kids, they’re really, really bad. The poor teacher admits that they’re problem children. If this is truly the case, they’ve given her way too many kids to deal with. Have a heart, you guys.

— Also, do you think current superheroes are ever forced to… I dunno, “renew” their license? Maybe they should. It’s like old people and driver licenses. Every few years, you should prove to the world that you still have the know-how. I’m bringing this up ’cause I also can’t believe that someone like Endeavor would pass this test with flying colors. Seriously, put him in that put with all these children. If he thinks he deserves to be the number one hero, let’s let him lead by example.

— I dunno, this isn’t a very compelling episode right now.

— This episode is so boring that even the heroes are getting restless.

— Amidst the chaos, Endeavor and All Might have a private conversation. According to the former, crime has gone up 3% compared to past years. Y’know, crime statistics are hard to pin down. There are so many factors at play like, say, an economic downturn. But I don’t want to get off topic. After all, the universe of My Hero Academia is very simple. And in this simple universe, the only reason why crime has gone up is because society has lost its Symbol with a capital “S”. I haven’t been shy about my thoughts on this. I think it’s silly and perhaps even dangerous to pin all of your hopes on one person — that it is up to a single Jesus-like individual to bear this burden. What’s the point of becoming a hero if the crime rate is dependent on one guy and one guy alone?

— Unfortunately, the conversation between adults ends far too quickly, so we’re right back to Bakugo and friends attempting to corral these unruly kids. Frankly, I don’t give a shit. 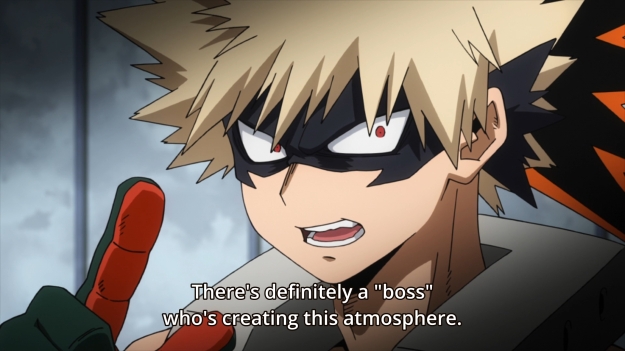 — After hearing the teacher’s sob story, Bakugo actually makes an earnest attempt at leading their ragtag group. Unfortunately, his proposed solution is likely to get them sued. Oh well, I guess like with these kids, you gotta be happy with him taking baby steps towards maturity.

— Ugh, I can’t keep this up, man. I’m really struggling to get through this episode. All Might’s conversation with Endeavor was so short, it might as well not be a conversation. Unfortunately, it was the only thing that pique my interest. All this nonsense with the kids is just killing me.

— Endeavor refreshingly admits that he never had the capability to surpass All Might on his own. Unfortunately, this means pinning all of his hopes on a child. What wouldn’t he do to in order to get Todoroki to the very top? Hell, what has he already done? What are the skeletons in his closet?

— All Might can’t directly answer Endeavor’s question. He can only say what he has done, which was to pursue hope with all that he had. It sounds very nebulous — almost conceptual, even. It’s as if no one else can currently fill the gaping hope that All Might has left behind because they lack not only his conviction and will, but most importantly, his purity. Someone like Endeavor is still human. He still has his petty reasons for being a hero. On the other hand, All Might doesn’t have any selfish desires. He doesn’t have any personal attachments to slow him down. It’s almost an impossible standard to obtain. Has All Might ever had a romantic partner? Is this what life is like for a hero at the top? Does one need to eschew all personal desires in order to serve as the Symbol of Peace? Yeesh, that makes him even more Christ-like than ever, huh?

— All Might ultimately says, “You do not have to copy the Symbol that I was aiming for.” And that makes sense… in a realistic world. It wouldn’t, however, make sense if you insist from the very beginning that our dying hero needs to pass the torch to his predecessor. It wouldn’t make sense in a world that requires a Symbol of Peace in order to prevent itself from falling apart. What I’m saying is that the universe of My Hero Academia feels like it is built upon the premise that requires a hero like All Might, so of course, those like Endeavor can’t help but feel inadequate.

— Todoroki also strikes out; he’s too boring for these children. With only four minutes left in this episode, it doesn’t look like our foursome will conquer these unruly children. That means I’m getting more of this sleep-inducing nonsense next week. In other words… just kill me now.

— It turns out these brats don’t respect anyone, because they think they’re hot stuff. Thanks to their equally bad parents, they already think they’re better than the crop of students standing before them. So in the end, Bakugo gets exactly what he wants: let’s just fight it out.

— I dunno, I guess Todoroki is the prime example of what we can expect from the future of this weird society. The kid’s got great potential due to his parents, right? So with every new generation, these kids are gonna keep getting stronger and stronger as Quirks get combined. That’s the theory, anyways. At some point, this sort of thing will get out of control… but I guess we’ll worry about that later.

1 thought on “My Hero Academia Ep. 79: The only thing worse than the League of Villains is a room full of children”