These girls think they’re not amused? I’m not amused! Imagine watching a show like Hatena Illusion shortly after getting off from work. Ah, it’s enough to make me despair…

So what’s new? Well, even though Yumemi made up with her classmates, she still refuses to go to school. Yep, this subplot again. Alright, what’s wrong this time? Well, as if we couldn’t already guess, the younger Hoshisato sister is much more talented than her sibling. She’s so talented that she can create artifacts much like her mother. Unfortunately, Yumemi’s creations are strongly influenced by her emotions, and right now, she’s not feeling too hot. She had created a really ugly bear, and it attacked her classmates. And that’s why she’s shutting herself away from the world again. That’s it. That’s the story. We spend an entire episode trying to figure out what her problem is, and it turns out that the best person to help these girls with their issues is…

…their mother! Amazing! Who knew that young, developing children need mom’s love! So this means that Maeve will be sticking around, right?

Bahahahaha… no. That’s mommy fading out of existence again!

Go away, old man. Nobody wants you. Anyways, Hatena is still as dumb as always. Just look at her: 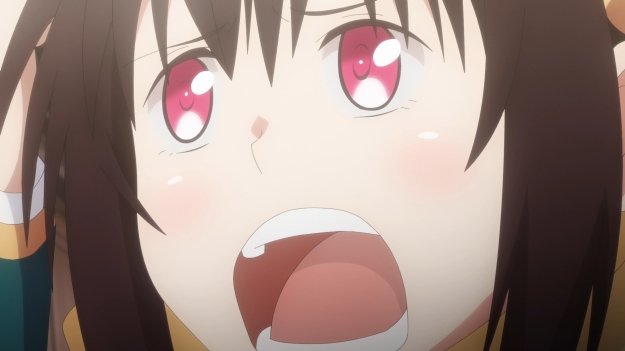 Look at that face. In this week’s episode, she’s specifically ordered not to endanger herself in an attempt to steal back an artifact… 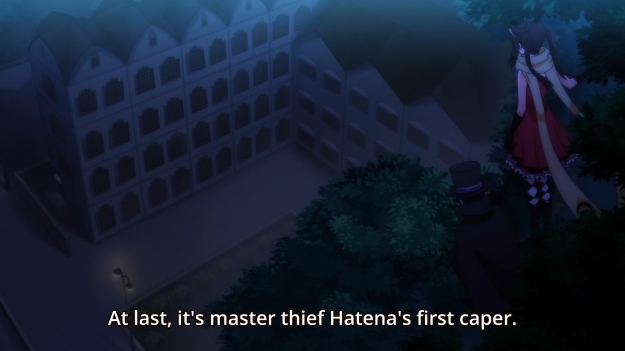 …so she goes and does exactly that. Evil auntie then shows up out of nowhere with a very dubious claim: come meet me and I’ll tell you exactly how to bring your mama back for good!

Look at Hatena’s face again! Her brain is really kicking into high gear as she deliberates over what to do. Yeah, I know auntie and I just fought a couple episodes ago… but what if she’s telling the truth?!

Whenever someone meets a former hero of theirs — or even just a senpai whom they used to respect — it always ends in disappointment. So when Seigi’s former classmate reappears out of nowhere, I just knew that the guy was up to no good. Guess what? I was right. Hase is our client of the week, and he wants to sell a fire opal. Unfortunately, his story sounds oddly familiar. In fact, it’s the exact same story that we saw in the very first episode of the series. I just don’t understand why Hase thinks that he even needs a story. If you want to sell something, you can just sell it. Making up a story gives yourself another way to screw up. Oh well. On the bright side, Seigi now has Richard so he doesn’t need his stinky ol’ senpai anymore!

So the moral is the story is that… hm… what is the moral of the story? That not everyone can be as upstanding as Seigi? That even in all his goodness, Seigi can be really, really annoying? I guess we got some rare introspection from him this week. He admits that he feels the compulsion to butt into people’s lives because he’s afraid to disappoint people. But even then, I don’t think the problem is that complicated. Seigi’s problem isn’t that he wants to help others. Seigi’s problem is that he doesn’t even ask if they want his help. Case in point, he jumps to the immediate conclusion that his senpai is looking to get married. So what does our hero of justice do? He starts looking up homes for Hase to buy. I assume he wants to surprise his friend, but eh… surprises are overrated. Again, there’s nothing wrong with wanting to help people, but just ask if they want your help.