But before we get to Aoyama, Todoroki and friends still have a room full of brats to deal with.

— Man, I feel bad for that kid on the left. I know he’s supposed to be a tank, but he’s gonna face so many inappropriate deep-throating jokes in high school.

— So what’s up with these brats? Why are they so strong? As Quirk-users mate with other Quirk-users, these powers are gonna mix and amplify themselves. Each generation is theoretically going to be stronger than the last. Perhaps we might even reach some sort of, uh, singularity point? I dunno, it’s an interesting thought experiment, I guess… but we can only speculate because something like this takes literally generations to study. So sit tight.

— This is why they’re such brats, though. Their parents probably enable them to hell and back. Oooooh, my precious lil’ baby is gonna be the best hero ever! So of course, the kid’s gonna think they’re hot shit. Well, every kid thinks they know more than the adults, but they usually don’t hit that phase until they become a teenager. In this wacky world, I guess everything is a little expedited.

— I’m pretty exasperated with their teacher. All she does is cry. No wonder the kids don’t respect her. She doesn’t carry herself as an authority figure. She lets them run roughshod over her by being so meek.

— At the end of the day, raw talent is nothing without proper cultivation. I mean, just look at Deku. He’s got the best Quirk of them all, right? But he can’t do shit without destroying his body. Depending on how much they want to milk this shounen series, it’ll probably take him hundred of episodes before he can hit 100% without assistance from others. Anyways, my point is that these kids are still just kids, so our foursome easily deflect their attacks. 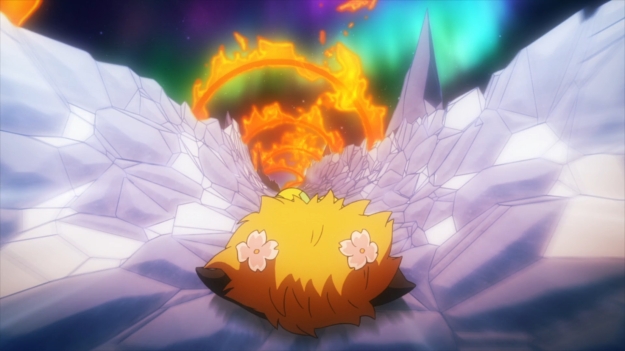 — But do they hit back? Of course not. That would be foolish. Instead, they pool their powers together to create a giant ice slide for the kids. Haha, okay.

— Even Bakugo calmly contributed to this plan. Gotta give him credit when he actually doesn’t act like a jackass. Shrug.

— He even tells the ringleader of these brats that if the latter keeps looking down on others, then he won’t notice his own weaknesses. This means Bakugo is practicing what he preaches, right?

— In the audience, All Might continues to help Endeavor reflect on what it means to be strong. The latter’s son and the others have clearly passed this test, so in the aftermath, he tries to make amends with the kid. Endeavor says that he’ll try to become a hero that Todoroki can be proud of. After all, there’s nothing cool about becoming the number one hero by default.

— More importantly, how can you be a good hero if you’re a shit dad and an even shittier husband. Look, we can’t all be heroes. We don’t all have the ability to go out there and battle supervillains. But we still do our part to help make this world a better place, and it starts with the “small” stuff. It starts with going good deeds in our humdrum, mundane everyday lives. I know this is supposed to be an uplifting moment, but I don’t think being a good hero alone will absolve Endeavor of all the terrible things he has done to his own family. What a jackass.

— Inasa has to sock himself just to face Endeavor. I guess he considers himself a friend of Todoroki, so he wants what’s best for his newfound buddy. What a straightforward dude.

— With this side story done and over with, we go to wrap up a few more loose ends. Y’know, like attending Nighteye’s funeral. Eri has regained consciousness, but she’s pretty much confined to her hospital room. Even worse, she’s not allowed to have visitors. They say it might be bad for her emotions, but I feel like not having visitors is also bad for her emotions. Oh well, maybe people can still send her letters or something. 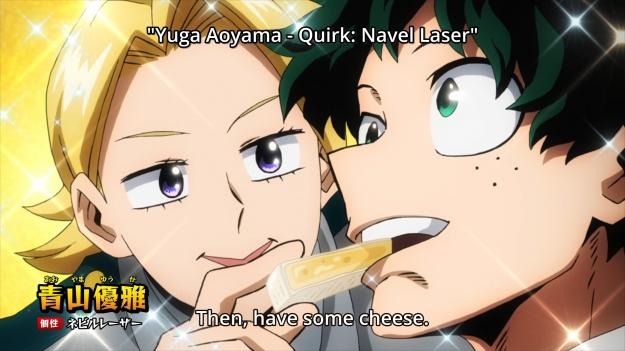 — We still got some time left in the episode, so out of nowhere, we get a closer look at the very bizarre Aoyama. My guy, you shouldn’t just shove cheese into people’s mouths! What if they don’t like the rind!

— Is… is he drinking wine at school?

— Our hero ends up not getting any sleep, so he’s late for school, right? This is why Iida is freaking out, right? Nah, Deku still has a minute to spare. I’m serious — I honestly kinda dislike Iida now. I think he’s way over-the-top.

— We get to watch the kids continue to train and hone their abilities, but it’s more of the same with Deku. As always, he spends a significant amount of time in his own head, fretting over whether or not he’ll be strong enough one day to save the people he loves.

— So here’s the thing… on the one hand, I’m screaming for this kid to be proud of himself. How many arcs have we been through with this guy? And he’s always come out on top as the hero. Dude, believe in yourself. Do we need to watch some corny self-help guru before you gain some confidence? On the other hand, I feel super bad for Deku and the rest of these kids, because their childhood has pretty much been taken away from them. Teenagers aren’t supposed to worry about saving the world. Kids are allowed to be a little self-absorbed, not freaking out because failure means the death of thousands or perhaps millions. It’s unfair.

— So here comes Aoyama to cheer us up. Dude shows off his new ability to write messages with his naval laser. Um, nice? Unfortunately, this makes him shit himself. It’s kinda amazing that he’s even in Class 1-A. His Quirk doesn’t seem all that impressive.

— Still, Deku got the chance to ask Aoyama why the latter has been so fucking weird lately. Well, it turns out Aoyama finally noticed that Deku’s Quirk also isn’t compatible with his body, so the two of them share that sort of kinship. So what’s the moral of the story?

— Friends! Friends are cool! Let’s be friends! Are you my friend! You are?! Yay!