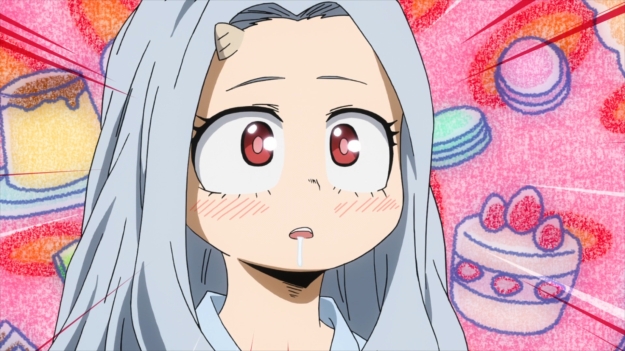 This entire season might as well just be dedicated to Eri.

— The episode opens with Mina showing off her break-dancing skills. It’s a good thing she has on under spats, because Minoru still sucks.

— Deku predictably can’t dance, but I gotta give him props for not having any reservations about it. Granted, he only wants to learn how to dance because it might help him fight better.

— This reminds me of NFL athletes taking ballet lessons in order to improve their flexibility and balance. I’m sure the same can be applied to fighting.

— Nearby, Denki starts gushing about Kyoka’s room and interests in music in general. She doesn’t like talking about it, though. Apparently, since her hobby doesn’t apply directly to her being a hero, she feels insecure about it. I dunno, that reasoning seems kinda silly.

— The following day, Aizawa tells his students that they’ll be participating in the upcoming school festival. Eijiro reasonably asks if they can afford to relax when the bad guys are still scheming to do bad things. After all, it’s not like villains are gonna have their own respective villain festival.

— Aizawa points out, however, that the festival showcases everyone’s efforts and not just those in the hero course. Plus, it’ll be a good stress reliever considering recent events.

— Finally, I would add — and this is something I’ve been harping on — that kids should be kids. Yeah, yeah, with great power comes great responsibility. But kids need to play; it’s part of their mental and emotional development. Those like Deku shouldn’t be stressing themselves out and tearing up over their inability to save the world at… what? The grand ol’ age of 15? 16? I forget how old he is, but his exact age isn’t important. What’s important is that he’s a kid. Hell, even adults can’t just go from one major task to another without taking a break in-between.

— Still, I’m sure this arc will have an antagonist. They might not be as fearsome as Kai Chisaki, but someone — most likely Deku — will still have to beat them up. I dunno, I gotta wonder if this is really necessary. At this point, fans of My Hero Academia have grown to love these characters, right? So wouldn’t it be be possible to have a short arc that focuses just on their school lives without all the hero stuff? I know it’s in the name, but I don’t think we always need to be throwing punches.

— Anyways, it’s time for Class 1-A to decide what they want to do for the festival, and of course, someone suggests a maid cafe. First, there are only six girls in the entire class. What would the boys be doing? It doesn’t take that many people to make coffee. Second, c’mon, if you only have six girls, then just squeeze all of them into the picture. Seems kinda mean to leave Kyoka out.

— The class is unable to come to a decision during the day, so the debate continues into the night. That’s when Shoto speaks up and suggests that they do a musical performance (with dancing, of course). Well, this is shaping up to be pretty tropey. In Trails of Cold Steel, your class also does a musical performance for the school festival. And of course, if I think about just anime and anime alone, who can forget Haruhi getting on stage back in 2006 and KyoAni blowing us away with the animation. Bones is pretty good, but they’re no KyoAni when it comes to just the purely technical side of animation.

— I just had to include this screenshot.

— So of course, Kyoka is the natural person to lead this effort. She’s hesitant at first, but Denki and others pump up her confidence. That’s nice, I guess.

— What’s not nice is this sinister-looking guy on the laptop? Uh, what’s up with him?

— We then see Deku and Mirio pay Eri a visit. According to the doctor, she doesn’t even have the energy to use her Rewind powers. On the one hand, she won’t pose a danger to anyone (though they’ll still have Aizawa there just in case), but on the other hand, we won’t be restoring Mirio’s Quirk anytime soon. Welp, Lemillion’s comeback is just gonna have to wait.

— The poor girl still feels guilty that everyone had to suffer because of her. Mirio quickly tells her that this isn’t the case. Everyone just wanted to see her smile, blah blah blah, so nobody actually suffered. Hmmm…

— Alright, I mean, yeah, don’t actually go and tell a traumatized kid that someone died trying to save her. But they did. They weren’t just trying to save her, though. They were trying to save the world as well. If Kai could exploit Eri’s powers as freely as he wanted, the entire world would’ve fallen under his command. And of course, no hero would let a child die. If you’re gonna save the world, you may as well save the child in the process. Otherwise, your principles are worthless and heroes need principles. Without them, they’re just lawless vigilantes.

— Deku then realizes that although they’ve managed to save Eri, they haven’t saved her soul. She was essentially tortured by Kai for years. She never had a proper childhood. She never had the chance to be nurtured by loving parents. Realistically, she’ll probably need decades of therapy as well as a proper family around her. But can we afford to pull that off in a shounen anime? Probably not. So what’s the next best thing? A school festival!!!! Pfft.

— But seriously, part of trauma recovery is play, and Eri will get that opportunity. This is assuming, of course, that some jerkass villain doesn’t get in the way.

— Speaking of jerkass villains, I guess we just had to have one. Meet Gentle Criminal, a villain for the vain social media age!

— First, wow, that’s a lot of eyeshadow! Second, this guy literally uploads videos of himself doing dastardly deeds just for fame. Yes, we see him robbing a convenience store, but he doesn’t actually keep the money. He just wants… I dunno, views and likes? I almost wish he had turned to the camera and said, “If you like what you saw today, don’t forget to Detroit Smash that subscribe button!”

— In any case, Gentle Criminal is strong enough to defeat all of these heroes on his own… but I’m sure Deku will kick his ass without having to go 100%.

— Last but not least, Gentle Criminal’s partner-in-crime is someone who calls herself La Brava. This can’t be a child, can it? Maybe that’s his true villainy: getting a child involved in crime. If she’s actually an adult, then she’s super short and child-like. Maybe she suffers from dwarfism. Poor girl. I would resort to villainy too in that case.