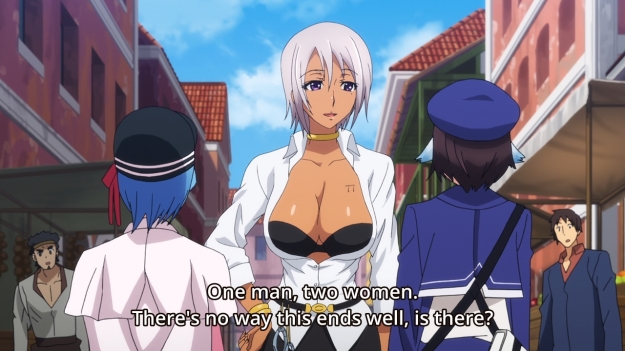 Nope, no time for a story when you have two girls battling it out for the hero’s love!

— When our hero wakes up, he finds himself next to Hina, but I’m sure they didn’t do anything lewd. Anyways, the guy mutters something about being unable to protect people. Maybe he’s seen lots of girls get swallowed up by the abyss. Maybe he’s lost lots of loved ones. I wouldn’t know. Why don’t I know? Because this series refuses to tell its story. After seven episodes, I still have no goddamn clue what Plunderer is about.

— Licht and friends arrive at a new town, and you know what that means: generic shots of a bustling market! Boy, those never get old, huh?

— Our hero continues to be bummed out, but instead of opening up to his newfound companion, he sexually harasses her instead. This time, he does it in public in front of everyone. Great!

— All of a sudden, Lynn shows up outta nowhere and puts Licht in cuffs. She then introduces herself to Hina as someone who briefly dated our hero. Boy, this show sure is going places.

— Meanwhile, Hina offers up an even dumber introduction. Yep, these girls are airheads.

— So of course, there’s only one thing for these two girls to do: put on an apron and cook…?

— Man, the animation quality is stellar.

— Honestly, Hina’s kinda scary. I now understand how she managed to survived all on her own until she met Licht and Nana. Just look at this bear charging at Hina. But does she flinch? Nah. We later see her wheel both a bear and a boar back to the competition. Anything for the creep who looks up her skirt, right?

— Pele is here, so Jail should be nearby… should.

— Apparently, if you dig around in a bear’s guts like so… a clean chop will come out! Ah, what are we even doing here?

— By the way, bear meat tends to carry a really nasty parasite. You can technically eat a bear, but to be safe, you almost always have to cook it to safe temperatures. Naturally, Hina is making a stew. A bear steak would probably kill Licht.

— When it’s time for Licht to taste the dishes, Lynn puts forth a cream stew. I’ve never had a Japanese cream stew — or any cream stew for that matter — so I have no idea how it would taste. Still, it looks decent enough.

— On the other hand, Hina’s dish looks like something that came out of a witch’s cauldron. In fact, it did!

— But guess what? Both stews end up tasting good. Of course they do.

— Unfortunately, Licht can’t decide between Hina and Lynn, ’cause he’s a typical anime fuccboi. So of course, Jail now shows up. Yup, the guy literally arrives late just to save Licht from picking a winner.

— After exchanging a few mild verbal jabs, the two men fight again. Now, you might assume that this is what I want — that I would prefer to see fighting action over a dumb and frankly kinda chauvinistic cooking competition. But this is the same fight that we’ve already seen. Nothing has changed. And nothing has changed plot-wise either. I gotta catch you because muh convictions!

— Only Nana has any common sense, but then again, she was the one who suggested the stupid ass cooking competition. 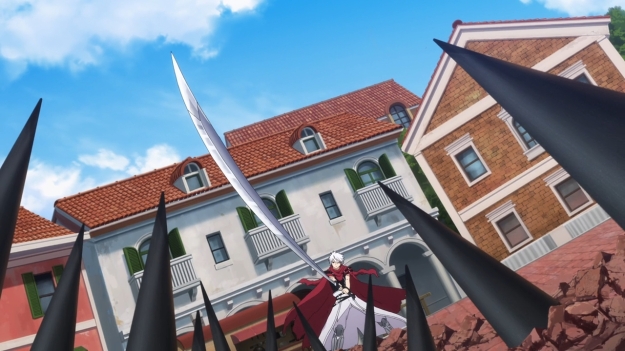 — It seems like Licht’s sword gets longer and longer with each passing episode.

— Jail knows that Licht is still holding back. When the latter leaves himself open, the former stops short of landing the punch, ’cause it probably wouldn’t matter.

— And now we’re drinking buddies?! C’mon, what is the fucking plot of this fucking anime?

— The next morning, Jail wakes his hungover ass up and realizes that Licht is missing. So it’s time for his team to chase after Licht’s team again. Too bad they’re going in different directions.

— So what are we gonna see next week? I dunno, some dumb city is on fire.