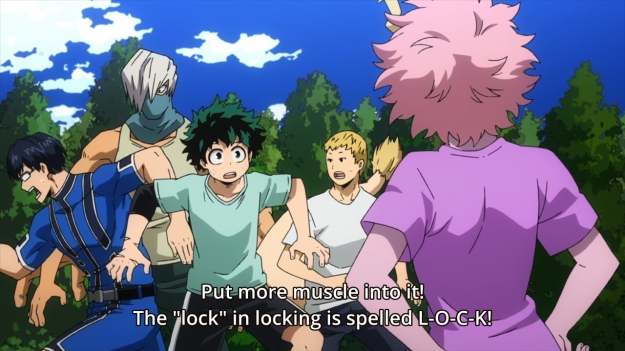 We get another slower episode, but I kinda like seeing the kids be kids?

— Practice for the upcoming performance is underway, and these scenes are about what you expect to see.

— Eventually, Eri does pay a visit, and Class 1-A’s enthusiasm is a bit too much for the shy girl as she hides behind Togata. C’mon guys, chill for a bit.

— Deku and Togata proceed to give Eri a tour of the school. Along the way, they bump into a jerk from Class 1-B. There’s always a rival class, and if there’s a school festival, some jerk from the rival class will swear up and down that they’ll defeat our heroes. Like war, anime never changes.

— But to be honest with you, nobody in Class 1-B even stands out to me. The only non-Class 1-A student that has made any impression on me is Shinsoo, and he’s in Class 1-C.

— We’ll also get a beauty pageant, and Nejire is all over that. I doubt the average Japanese high school would approve of such a flashy dress, but in anime land, fanservice is king.

— Apparently, Nejire always loses to, uh… this person. I wonder if they’re just voting for this lady ironically.

— We eventually pay Mei a visit. I don’t think we’ve seen her in a while. A lot of people wanna ship her and Deku, but I dunno. The obvious reason to doubt this pairing is because, well, she’s obsessed with her “babies.” But for me, this has to be the number one reason to root for some other girl.

— I think for Eri, school life is so different from anything that she has ever experienced, so it’s like a culture shock. But you kinda know how this subplot will play out. She’ll likely be blown away by Class 1-A’s performance. And as long as the anime can impress the viewers as well, this predictability can be overlooked. 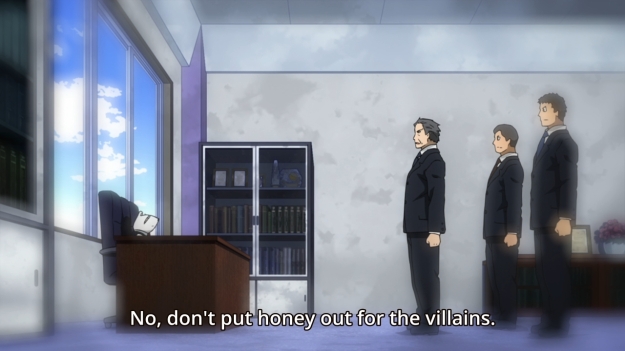 — Apparently, the police wanted the principal to cancel the school festival out of safety concerns, but you know how it goes. If we allow fear to control our lives, then the bad guys have already won. I mean, what are we supposed to? Simply not live our lives? You can’t call yourself a hero if you can’t even protect a school festival.

— After playing tour guide, Deku returns to his team only to discover that he no longer has a major dancing role. Whoops. But he’s such a nice guy so he just agrees with it. I wonder if we’ll ever see Deku act selfishly… I don’t think we will. I think shounen heroes like him are too archetypal. I think a lot of these shounen authors kinda get off on how pure these main characters can be.

— Even with all the festival hoopla, Deku finds time to squeeze in a training session. See what I mean about archetypal? There’s not a normal teenage bone in his body. Well, he broke them all using One for All…

— There’s not much to discuss here. Deku’s gonna get a new support item from Mei and their interactions always kinda amuse me. But other than that, All Might warns the kid not to rely too much on items. You might lose your form or something…

— Alright, alright, we’ve spent enough time lounging around with the kids. We should probably shift our attention to Gentle Criminal and La Brava by now. So right on cue, Deku somehow stumbles across one of the dude’s videos. Just look at that ratio… man, not a single like. Deku must have scrolled pretty far down to get video with such a negative score.

— So we get a few minutes where Gentle tells La Brava all about how he’s gonna sneak pass U.A.’s security. I know I said all that shit about how you gotta live your life and not let the terrorists win, but you can’t deny that the school does a piss-poor job at keeping the bad guys at bay.

— But look, La Brava is a master hacker, so that’s why they can get pass U.A.’s security system! I think the most interesting thing I learned this week was how she literally cyberstalked Gentle. 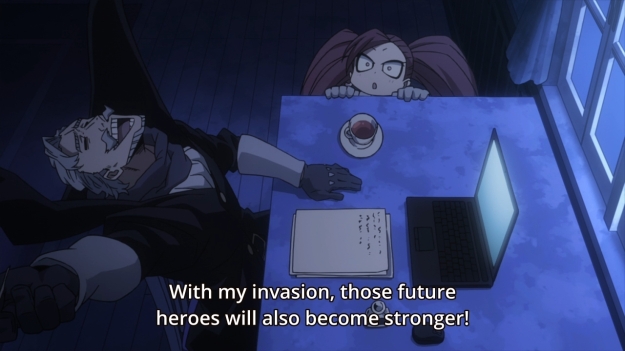 — Other than that, Gentle just gives some spiel about how his next stunt will help our heroes be more mindful of their current situation. What can I say? I guess a light-hearted school festival arc needs an oddball not-really-a-bad-person villain. Even La Brava is like, “Gee, I dunno about picking on a buncha children….” So like I’ve said previously, do we even need a villain at all?

Alright, let’s talk about that movie. I’m going to spoil major plot points, so obviously don’t read it if you care about that. My initial plan was to put up a separate post just for Heroes Rising, but by the end of the film, I realized I couldn’t. I realized that I just don’t have that much to say about it. First off, I can rattle off the obvious positives. Great animation for the action scenes as usual. It’s also nice to see Class 1-A work together as a team. These scenes, however, do strongly emphasize how the girls don’t have Quirks that allow them to engage in intense combat. So as always, Deku, Bakugo and Todoroki get the final hits in… along with bird man, I suppose. But I digress. Moving along, I went with a non-anime fan who knew nothing about the series as a whole, but the cast was nevertheless charming enough to amuse her. And finally, it’s good to see that Bakugo can “lower himself down” and work with Deku. I’ll never understand how he consistently tops the popularity polls, but on the bright side, he won’t become a Vegeta.

But y’see, that last point about Bakugo is pretty much all that really stands out to me. Maybe my expectations are skewed for movies, but I felt like Heroes Rising didn’t do enough to move the story forward aside from Bakugo’s maturation. For the most part, it just gives us a glimpse of what to come. Things like how Deku could eventually activate Quirks from previous One for All Users. But really, Bakugo is the only one who I felt had an appreciable character arc, and even then, the movie copped out on us. What was with that ending? Yo, what was with that ending? It’s like we have this cool idea that we originally wanted to save for the story’s true finale, but maaaaaybe we’re gonna do something else now. So fine, let’s use it now. Let’s just jam it into this movie. Oh wait, if Deku passes on his powers to someone else, then it’s over for him. Welp, time to Detroit Smash that reset button.

I already know One for All kinda has a mind of its own so the fact that it chose to stay with Deku wasn’t that egregious. It was pretty groanworthy, but I can live with it. But then they had to go with the whole memory loss bullshit for Bakugo? And now Bakugo won’t even remember that Deku sacrificed his dream to be a hero just to save some islanders? That’s what I mean by blunting Bakugo’s character development. Sure, he can work with Deku. Their teamwork is strong enough to defeat this random ass All for One clone. But I felt like it was important for Bakugo to see Deku’s complete selflessness. Well, now he can’t ’cause he literally can’t remember what happened. That’s lame, man. That’s so lame. I know that part of being a hero is doing what’s right even when no one is looking. It’s like how Goku lives in pretty much absolute obscurity despite saving Earth a billion times over. But this is a new series decades later, and man, I would love for a shounen series to shake things up.

Other than that, I just feel as though if you’re gonna sit me down for nearly two hours, you need to do a little more to move the needle. And aside from Bakugo’s subtle maturation, ehhhh… Nine? He’s whatever. A total whatever within the grand scheme of things. Another bishie villain with silver hair and a threadbare backstory. Oh yeah, you want a utopia where the strong rules over the weak? Get in line, buddy. He has his time in the spotlight, then Shigaraki swoops in at the last second to wrap things up, i.e. erase Nine’s existence. What a bore. I suppose you don’t want to bring a villain back from a movie that people might not have watched, but I don’t think that is such a big deal. As for Deku… sure, he put together a plan to stop the bad guys, but you could always count on him for that. It’s nothing new. Nothing new really happened. Oh wait, he used 100% Full Cowl without assistance from Eri… but that’s not character development.

There are a lot of explosions in the movie. I think Polygon likened it to an anime version of a disaster film. But in terms of impact — story impact — Heroes Rising didn’t leave much of an impression on me as a long time viewer of the series. I’m not here just for the thrilling action. Rather, I always want to see how the characters evolve. Aside from Bakugo’s two steps forward and one step back maneuver, I got nothing from Heroes Rising. If I had to grade the film, I would give it a lukewarm C+.