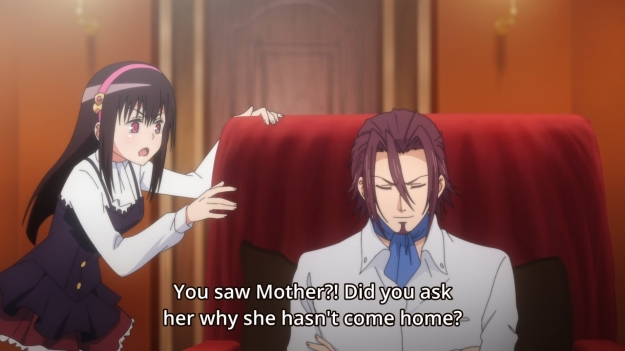 In this week’s episode of Hatena Illusion, the girls’ father suddenly returns home from his… I dunno, misadventures? But he may as well have stayed away, ’cause he’s no help. All he does is stand in the background and look sad. The girls want an explanation from him, but they get nothing. Clearly, the patriarch doesn’t run this household. There’s nothing wrong with that, but Mamoru is looking pretty pathetic right now. His daughters are concerned and confused, and he can’t do anything to calm them down. What kind of parent is that? Plus, he hasn’t really taught Makoto much of anything. He’s thoroughly useless. It sounds like everything now depends on Maeve, but she is still nowhere to be found nor can they contact in her any shape or form. Exasperating, isn’t it?

Mariah continues to insist that she only has her nieces’ best interests in mind. And to be fair, it’s not as if she doesn’t have a point. Hatena is reckless and doesn’t listen to anybody. She’s only in middle school, but she already thinks she can take matters into her own hands and masquerade as a thief. We’ve seen, however, that Makoto has had to rescue her twice now. So yeah, both she and Yumemi are not only in danger of being attacked by others, but they’re a danger to themselves. On the other hand, Mariah certainly wasn’t concerned with Hatena being captured by that rotund museum lady a few episodes. She even walked away as her niece was being strangled by pink tentacles. Furthermore, she has proven that she’s a liar, so why would anyone believe her? Maybe this former murderer wouldn’t hurt me now, but I wouldn’t bet on it!

There’s some backstory about Ema, and maybe it’s tragic or whatever… but I don’t care. In any case, she decides that she needs to stop coddling her masters, so she’s going to have Jeeves become a bishie and beat them up. Yeah, I’m joking about that part. The old man powers up into a hot dude. Imagine that. And if he can beat some sense into the two girls, maybe — just maybe — Mariah will let them keep their artifacts. Still, it’s hard to understand what either she or Mamoru are thinking. If the kids make a stupid decision, you kinda expect it ’cause they’re kids. But the adults just seem downright stupid. 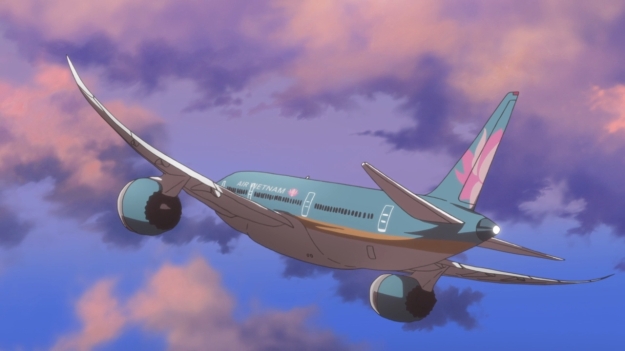 Seigi is so distraught by Richard’s disappearance that he’s determined to hop on a plane and search for the guy. Man, that’s one hell of a bromance. I wouldn’t do that for a friend… but I’d do it for a lover and therein lies the rub. Seigi was all but ready to give up on Shoko had Richard not talked some sense into him. Now to be fair, she does do the same for Richard in return; she does help our hero understand why he’s so frustrated by the current situation. Still, I dunno why the author didn’t just make this a love story about Seigi and Richard. We’ve already dealt with LGBT issues in a previous episode. It could’ve served as foreshadowing for these two men’s deepening relationship. More importantly, it’s not like Seigi’s relationship with Shoko is going anywhere. They’ve essentially hit the reset button. She seems shoehorned into this story for no good reason, and yet, I’m supposed to believe that she would be utterly devastated if he disappeared? I dunno, man. He even tells her in this episode, “I really like you,” and he gets the most platonic reply possible.

Anyways, Seigi bumps into one of Richard’s cousins on his way to Europe, so we get a big history lesson on the Claremont family. What’s at stake? A ridiculous 300 million pound diamond. You could almost win the American Samoa Democratic Caucus with that amount of money! No gem should be worth that much. That’s insane. Nevertheless, this family is tearing itself apart over it. Apparently, if Richard doesn’t marry a woman — a good and proper tea-drinking English woman — then the diamond goes to nobody in the family. It would go to an environmentalist group instead. That sounds good to me! Imagine what said group could do with 300 million pounds… but obviously, this doesn’t sound good to the family. In fact, they convinced Richard’s first love — and only love? — to break up with him over this stupid diamond. Of course, he’s not blameless. He admitted in last week’s episode that he didn’t have the courage to fight for her. Still, I’m the kind of petty person who would totally allow the diamond to go uninherited. You screw me over, I screw you over. Retribution is fun, man. And because it’s just a diamond, I would be even more inclined to do so.